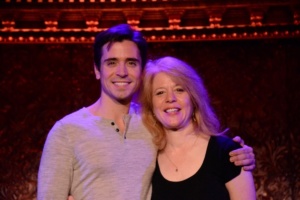 Kathleen Marshall will serve as guest creator, director, and host. Musical director David Chase we bring West Side Story, Gypsy, Fiddler on the Roof, Peter Pan, and Call Me Madam, which were all written by extraordinary composers and lyricists to life. These shows were transformed by Jerome Robbins. In Robbins’ centennial year, three-time Tony Award winner, director/choreographer Kathleen Marshall creates and hosts this celebration of how a legendary director/choreographer shaped some of Broadway’s greatest musical scores.

Join Marshall and a cast of Broadway’s best and brightest performers and musicians in this roof-raising tribute to Robbins at 100. With a jackpot of powerhouse songs from some of Broadway’s most famous shows by Bernstein, Sondheim, Bock and Harnick, Jule Styne, Irving Berlin, Comden and Green, and others.

T2C talked with Matt about his career and working on this incredible project.