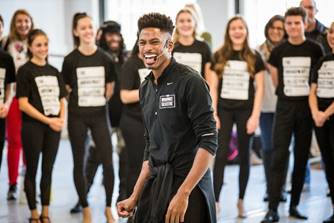 Robert Hartwell, founder and artistic director of The Broadway Collective, announces Project Next Gen, a scholarship award that brings underrepresented students—including people of color, immigrants, refugees, transgender, non-binary, and students from low-income school districts—to New York City for a week of Broadway training and mentorship.  The Broadway Collective is a training academy offered online, in New York, and nearly 20 cities nationwide, for young performers who are serious about pursuing a career in the music theatre industry.

To help raise scholarship funds The Broadway Collective hosts a star-studded concert on Monday, June 17th at Haswell Green’s (240 West 52nd Street).  Doors are at 7pm, the concert is at 8pm, followed by an after party sponsored by S.N.O.B. (Sunday Night on Broadway), a monthly Broadway industry party.  An online auction will be open for biding, and donations will be accepted through a text to donate campaign. Performers include Emmy and Tony nominee Brandon Victor Dixon (Hamilton, Jesus Christ Superstar Live!), Tony nominee Adrienne Warren (Tina, Shuffle Along), and Jelani Alladin (Frozen). Additional performers to be announced; the lineup is subject to change.

Tickets are $25, and a select number of VIP tables are available for $250, and include four tickets, signature cocktails, and hors d’oeuvres.  All tickets can be purchased by visiting bit.ly/BCGNextGenTix.

“America isn’t just one color or one story, it’s a melting pot of experiences, cultures, backgrounds, and viewpoints,” said Hartwell, a seven-time Broadway show veteran (most recently in the Tony Award-winning production of Hello, Dolly! starring Bette Midler). “The Broadway Collective believes that it is high time for professional musical theatre to be just as diverse and complex as our country — and we have a plan to help change it starting at the educational level.  Right now, there are lots of underrepresented, and underserved students around the country who dream of working on Broadway when they grow up—but many of these kids don’t have access to the arts education they need. This puts that child at a huge educational disadvantage; we are determined to change that.”

This year, Hartwell’s team fielded hundreds of audition videos—submitted from all around the country —to find the most promising young performers nationwide. Fifteen high school students have been selected for the 2019 Project Next Gen scholarship award.

These fifteen award recipients will travel to New York City this summer for master classes with Tony Award-winning performers, meetings with managers and casting directors, tickets to Broadway shows, backstage tours, dinner with cast members, plus airfare, hotel accommodation, and meals (for both student and a parent/chaperone)—all included.

Project Next Gen’s mission is to make arts education accessible to everyone—regardless of ethnicity, gender identity, or economic situation—and bring more diversity and inclusivity to the future of Broadway and beyond. Hartwell has a deeply personal connection to this mission.

“These are students who would ordinarily never be able to afford this kind of arts education experience without financial aid,” says Hartwell. “This is a life-altering experience for these kids—one that will open their eyes to what’s possible for their futures and help launch their careers in the arts.  Growing up as a black kid in a single parent household in North Carolina, we didn’t have any money to spare for dance, voice, and acting lessons, let alone a college education,” Hartwell says. “I was blessed; I received a lot of help from people who believed in me. Teachers. Mentors. And financial aid—grants, awards, and scholarships—that’s what made this path possible for me. Without scholarships, I would not be where I am today. Now I want to pay it forward to Broadway’s next generation.”

The Broadway Collective is a training academy for young performers who are serious about pursuing a career in the music theater industry.  All of our teachers are current Broadway performers. Students learn what it takes to succeed in this highly competitive industry from people who are actually doing it.

Whether you’re dreaming about getting the lead role in your high school musical, getting into a top BFA college program, or making your Broadway debut, we help you train, prepare, and make it happen.  We prepare our students for success in the performing arts—and everywhere else in life.

Founded years ago, S.N.O.B. (Sunday Night on Broadway) began as a way for castmates and crew to kick back and blow off some steam on Saturday nights in dressing rooms across the rialto.  From its initial incarnation with a rotating cocktail donor and a simple playlist, the concept quickly spread from theatre to theatre, often ending up at a midtown bar.

Now a full-blown dance party, S.N.O.B. is held one Sunday a month at RowNYC in the heart of the theatre district as an opportunity to come together as a community and connect with good people, great music, and a cash bar.