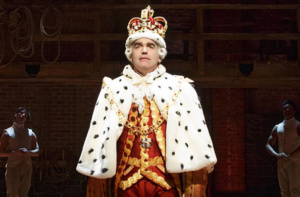 Three-time Tony nominee Brian d’Arcy James originated the role of King George III in Hamilton, down at the Public Theatre in 2015.  James, returns to the role for a limited engagement on Broadway starting April 14. James went on to star in Something Rotten and Hamilton opened on Broadway with Jonathan Groff in the role, followed by Andrew Rannells, Rory O’Malley and Taran Killam.  Killam will play his final performance on April 13.

James was awarded the 2016 SAG Award, Critics Choice Award, Gotham Award and the Independent Spirit’s Robert Altman Award for Best Ensemble for his portrayal of Matt Carroll, one of the four critical members of the Boston Globe’s Spotlight team opposite Michael Keaton, Mark Ruffalo and Rachel McAdams in the 2016 Best Picture Oscar winning film “Spotlight.” He has received three Tony nominations for his work on Broadway: Nick Bottom in the hit musical Something Rotten, Shrek in Shrek The Musical, and Sidney Falco in Sweet Smell Of Success.  Additional Broadway credits include: the role of Banquo opposite Ethan Hawke in the Lincoln Center production of Macbeth, starring alongside Laura Linney, Christina Ricci and Eric Bogosian in the the straight play Time stands Still and starring in the Pulitzer Prize-winning musical Next To Normal.  Television fans know him most noticeably for his roles on NBC’s “Smash,” Showtime’s “The Big C,” and the award-winning HBO movie Game Change. He also appeared in the 2015 film Sisters with Tina Fey and Amy Poehler. He has multiple projects in the works including Netflix’s new TV show, “13 Reasons Why,” and the feature films Felt, Molly’s Game, Song of Back and Neck, 1922 and Trouble.

Suzanna BowlingAugust 9, 2022
Read More
Scroll for more
Tap
Aisle Say On The Square: March at the Signature Center (Part Two)
He Says: The Glass Menagerie: The Fragile Heart of the Matter