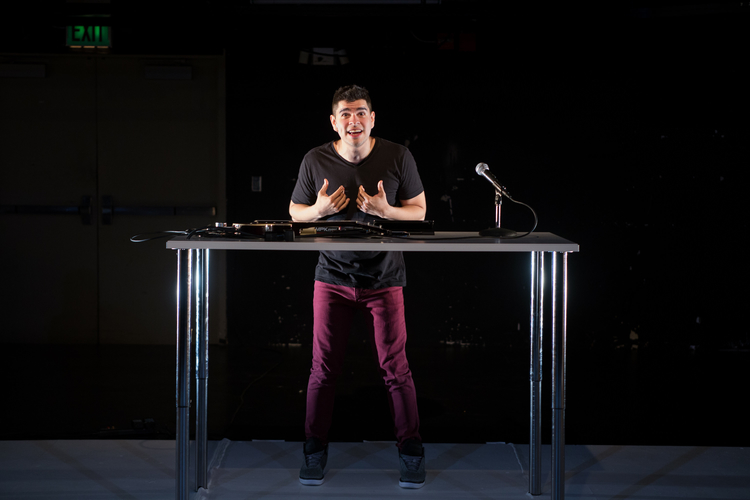 Brian Quijada’s Where Did We Sit on the Bus? is Masterful

Brian Quijada’s Where Did We Sit on the Bus? is Masterful 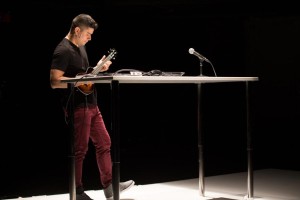 Lin-Manuel Miranda and John Leguizamo, have spawned children and the first is Brian Quijada. This remarkably talented 27-year-old writer-actor-dancer-musician-sound master, is sure to become a star. His one man show of Where Did We Sit on the Bus? at the Ensemble Studio Theatre and The Radio Drama Network should have ticket-buyers lining up at the box office. This solo play examines what it means to be Latino through the eyes of a child, turned teenager, turned adult. Mr Quijada dazzles in his 90-minute work which incorporates Latin rhythms, hip-hop, spoken word, theater, identity, immigration, B boxing and so much more. This is one dynamic bundle of energy. You will never look at twister the same after seeing this show, thanks to lighting designer Diane D Fairchild and projection designer Liviu Passare. 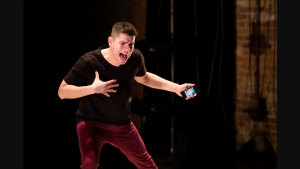 This autobiographical show is highly political and makes a great argument for immigration. The story is set into motion when Quijada proposes to his Swiss-Austrian finance and is faced with the question of how will he raise his “mixed-heritage” kids without screwing them up. We go back in time to learn Quijada, is a child of immigrant parents from El Salvador. Out of four children only he and another brother were  born in the US. His entire life he and his family are seen as outsiders, first in a primarily large Italian community, that is dirt poor. During a Black History Month lesson he realizes that his culture is left out off the quotation, so he pounders where does he and others like him get to sit on the bus? When his family moves uptown, the culture is now Jewish and his Latino friends remind him not to forget where he comes from. It is through theatre that he finds his balance despite his father’s disapproval which brings them both pain.

This show is also deals with coming into ones own when your parents don’t approve of who you are.

Chay Yew’s, direction is perfect for this hyperkinetic performer who is sure to win several awards and become as big as Miranda and Leguizamo.

Where Did We Sit on the Bus?”: Ensemble Studio Theatre and The Radio Drama Network at The Curt Dempster Theatre, 549 W. 52nd St., through

Suzanna BowlingNovember 22, 2021
Read More
Scroll for more
Tap
How to Be an American! A Political Look At Tammany Hall
Broadway Morns the Passing of Edward Albee