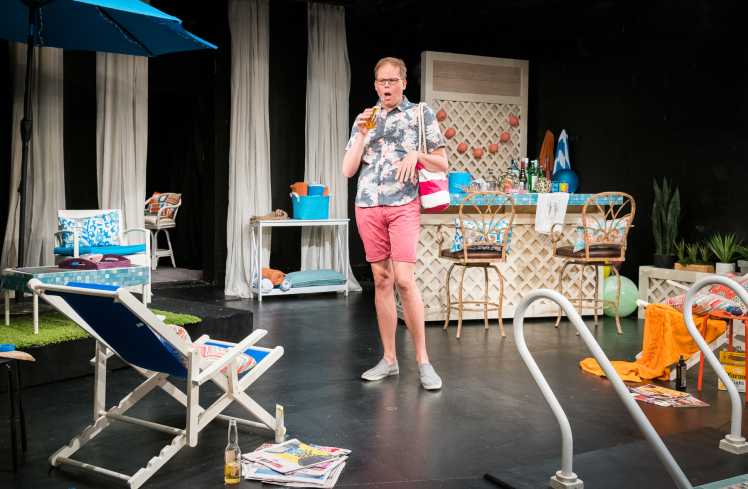 Bright Colors And Bold Patterns: Hiller Stirs Up the Same Wild Cocktails… But Made With a Darker Liquor

Bright Colors And Bold Patterns: Hiller Stirs Up the Same Wild Cocktails… But Made With a Darker Liquor

All photos by Russ Rowland

This is my third time being a guest poolside for Bright Colors And Bold Patterns, my second time at Soho Playhouse, and the first time with the new lead, Jeff Hiller (Broadway’s Bloody Bloody Andrew Jackson) and I must say, it hasn’t lost any of its biting wit and dark laughs. As it was with the first visit to this party, the lead (and only) character, Gerry, is the man of this happy hour. He’s that guy that we all know that shows up at every party, a bit drunk already, and demands the follow spot. He’s the one who talks and talks and talks, barely letting anyone else get a word in, until in a moment of seemingly curiosity, he asks an innocent bystander a direct question. And then, as quick as an energizer bunny, he  snatches back the microphone and flies off to where ever he deems this party should go barely loosing the beat.

We also know this locale too, especially if you’ve ever been privy to the poolside world of  beautiful gay men basking in the sun in designer speedos on Fire Island or at their country home. In this particular case, it’s a Palm Springs desert house, meticulously and homo-fantastically designed by Dara Wishingrad (Kimmel Centre’s 8 Stops) that is hosting a small gaggle of gay men from LA brought together for a college friend’s gay wedding. Unseen and unheard, but implied, lounging by the pool is a sunbathing couple, Dwayne and his much younger boyfriend, Mack. Both “gorgeous”, or so we are told by Gerry, the dear friend, ex-lover, and former NYC roommate of Dwayne. He wheels in with his Rollie bag and heads straight to the bar for a drink. He needs it, you see. Like medication or fuel. Or maybe both.

The title of this piece refers to a not-so-subtle suggestion on the wedding invitation to avoid wearing Bright Colors And Bold Patterns. Rightly so, Gerry is deeply offended and triggered by this request to tone down the ‘gayness’ of the attendees. It feels like a homophobic slap in the face to all that he holds dear. This insulting idea sets off alarm bells in his brain. To make matters worse, arriving just after Gerry is the preverbal last straw, another one of Dwayne’s ex-boyfriends, Neil, sweetly referred to as “fuckface” by Gerry. To Gerry, he optimizes all that is khaki and boring in his colorful gay rainbow. And there is no love lost between the two. Gerry is everything that makes a gay man like Neil uncomfortable. Loud, sarcastic, and very very gay, and Hiller, like the previous star Droege, is magnificently on-point throughout.

As written by Droege, it’s a marvelously funny piece of writing: a loud and wise cracking diatribe on gay culture referencing, condemnation, and contemplation. Challenging all kinds of stereotypes with every jab and twist. It’s a political discussion lead by a drugged out messy gay man, drunk on shame, anger, and tequila. He has a lot to say, and doesn’t hold back his opinions on topics ranging from Queen Latifah, ‘Steel Magnolias‘, Candace Bergin, (“He was practically raised by Candice Bergin. No, Dwayne, that wouldn’t be amaaazing – that woman was raised next to a wooden doll, so no wonder she’s creepy”), making a grand cocktail of it all, blended on high with sex, drugs, and pop music thrown in. The references come fast and furious, just like the margaritas and with the strong guiding hand and eye of director Michael Urie (The Government Inspector, 2ST’s Torch Song), Hiller nails it time and time again. It’s bitchy and uncomfortable at moments, cruel and mean-spirited at times, but underneath all that, there lies a whole lot of raw truth in that discomfort.

This visit to the poolside party, I brought along my good friend, thinking he would love it as much as I have in each of my previous viewings. The talented threesome of Urie, Droege, and Hiller squeeze out every conceivable laugh from this very funny, dark, and engaging material, making us laugh alongside the main character while also cringing at the uncomfortable moments of need and desire that the well crafted script provides. But for some reason, my buddy didn’t connect with the material. Maybe his persona is a bit too close to the alcohol-loving and drug abusing Gerry to laugh as deeply as the crowd in attendance late last Saturday night. Or maybe the darkness of the piece, and there are a number of moments within the piece when we watch him connect to his internalized shame and trauma from growing up gay in an non-inclusive world and the confusion being experienced by many single gay adults dealing with the new availability and access to gay marriage, laid a bit heavier on his heart. Who’s to say (and my buddy isn’t talking)? But the new diverse horizon, although extremely satisfying and welcome (especially in these dark political times), does fit uncomfortably in the minds of some of us older gay males who fought hard to accept our uniqueness in a homophobic world, only to find ourselves being told that now our uniqueness is bothersome and we should tone it all down and desire the norm. Some could interpret that as being told to be beige.

So it’s a wild ride leading up to the wedding, and Hiller is chatterbox-wonderful as a guide and cocktail -maker, taking us on a ride we won’t soon forget. The writing and performance is hysterical, and skillfully has an undercurrent of desperation and longing camouflaged with all of his witticisms and judgment. This coping mechanism seems to be under the skin of many a gay man trying to figure out the new world order. He does take the party to a darker and more uncomfortable place a few times more then Droege, and maybe that’s why the piece felt a bit heavier and more emotionally taxing. An actor friend stated that in a one man show like this, the deepest and darkest moment should come close to the end to have the greatest impact, and although I’m not sure I entirely agree, there does seem to be a few moments that did battle for this Trophy of Darkness, which might be the reason the last bit didn’t hit me with the same sense of recognition and dimension. But that isn’t meant as a criticism by any means, just an observation of the wonderful ability that this tightly wound Palm Springs tale can be uniquely and expressively told by other actors beyond Droege, the playwright. And that uniqueness should be embraced and loved. It appears to be working as the show has once more been extended, now to  March 11th. All jacked up and speeding forward, fueled by cocaine and unfiltered hilarity, Hiller flies at us fast and furious, and obnoxiously at moments. So go join him at the pool for this wild party. Grab a margarita and wade in. I’m not saying you will like him, or want to invite him to your pool party, but you will laugh and you will definitely see his point.