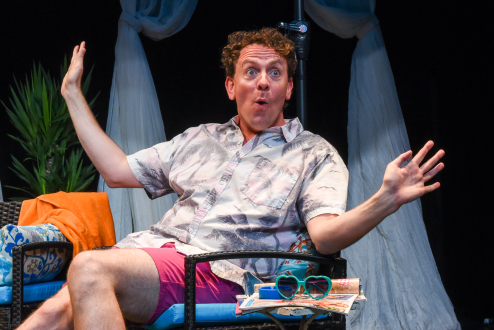 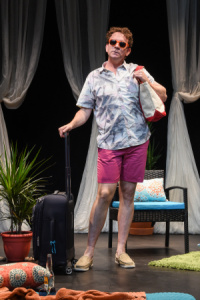 There’s always that one loud character that shows up poolside. We all know the one, a bit obnoxious, throwing barbs at everything and everyone, sometimes very funny, but usually messy. We all know him, especially if you’ve ever been lounging by a pool in the gay world of beautiful men, and their summer beach/country homes. In this particular case, it’s a lovely Palm Springs desert house (meticulously designed by Dara Wishingrad) that is hosting a group of gay men from LA gathered together for a gay friend’s wedding. Unseen and unheard, but implied, are what seems to be a Speedo-wearing, sunbathing couple, Dwayne and his much younger boyfriend, Mack. Both gorgeous, or so we are told by the new arrival, Gerry, the ex lover/NYC roommate of Dwayne. He wheels in with his Rollie bag and heads straight to the bar for a drink. In more ways then one, this is Gerry’s show, as it is Drew Droege’s, the solo writer/performer of Bright Colors and Bold Patterns. As played by Droege, Gerry is a chatterbox who talks and talks and talks, barely letting anyone else get a word in, unless asking someone a direct question. And even then, he doesn’t give up much time nor the reins of where this conversation is going. 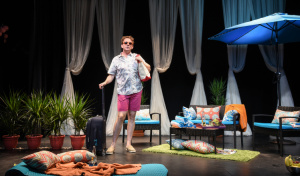 The title of this piece refers to a not-so-subtle suggestion on the wedding invitation to avoid wearing Bright Colors and Bold Patterns. Rightly so, Gerry is deeply offended and triggered by this request to tone down the ‘gayness’ of the attendees. It feels like a homophobic slap in the face to all that he holds dear. This insulting idea sets off the alarm bells in his brain, and what follows is the result. And to make matters worse, arriving just after Gerry is the preverbal last straw, another one of Dwayne’s ex-boyfriends, Neil, sweetly referred to as “fuckface” by Gerry. To Gerry, he optimizes all that is khaki and boring in the colorful gay rainbow. And there is no love lost between the two. Gerry is everything that makes a gay man like Neil uncomfortable. Loud, sarcastic, and very very gay, and Droege is magnificently on-point throughout. 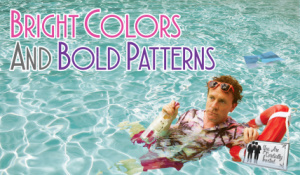 As written by Droege, it’s a marvelously funny piece of gay writing: a thesis in gay culture referencing, condemnation, and contemplation. Challenging all kinds of stereotypes with every jab and twist. All jacked up and speeding forward, fueled by cocaine and unfiltered hilarity. The topics fly at us fast and furious, and obnoxiously at moments, but as a gay man myself, I got what was transpiring here. I’m not saying you will like him, or want him in your home, but you will laugh and see his point. You do not have to be gay to get on board with this piece, but it sure does help. The writing and performance is hysterical, and skillfully has an undercurrent of sadness, desperation and longing camouflaged with all of his witticisms and judgment. This coping mechanism seems to be under the skin of many a gay man trying to figure out the new world order. I’m also guessing this was written before Election Day, as that gay positive world under Obama’s watch has clearly made a shift in another direction, and this piece might have a few different twists and turns had it been written after. But in his pre Election Day diatribe, Droege wants to talk about the complications of a world where gay marriage and sexual openness/positivity are having an effect in so many various surprising ways on the modern day gay man’s psyche. 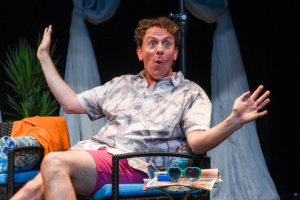 It’s a highly political discussion lead by a drugged out messy gay man, drunk on shame, anger, and tequila. But he has a lot to say from topics ranging from Queen Latifah, Steel Magnolias, Candace Bergin, (“He was practically raised by Candice Bergin. No, Dwayne, that wouldn’t be amaaazing – that woman was raised next to a wooden doll, so no wonder she’s creepy”), all the way to sex, drugs, and pop music (not rock and roll). The references come fast and furious, and partly because of the skillful direction of Michael Urie (“Ugly Betty”, Buyer and Cellar), he nails it time and time again. It’s bitchy and uncomfortable at moments, cruel and mean -spirited at times, but underneath all that, there lies a whole lot of truth in that discomfort. Now that gay men can marry, he asks (and I’m not quoting here), what’s next? Was that the final destination? After years of trying to become comfortable and proud of our differentness, are we to embrace the hetero norms of today’s world? Get married, have kids, live in a cul-de-sac? It’s a compelling argument, especially for us older gay man who did spend a great deal of energy trying to work out how we can be proud of our uniqueness and our sexuality while being forced to live outside of main stream, USA. I applaud him for his bravery and his realness, especially as the end of the evening draws near, and the drugs begin to wear off. It’s time to get real. Bare our souls to the world, and become ok with it all. He might not be the first person I’d invite to my poolside gathering, but he certainly would keep things lively, and very very funny.

Suzanna BowlingAugust 2, 2020
Read More
Scroll for more
Tap
MYTHO? Lure of Wildness: A Tall Messy Tale
The Babylon Line a Playwright Looking For a Story or Actors in Search of a Better Play