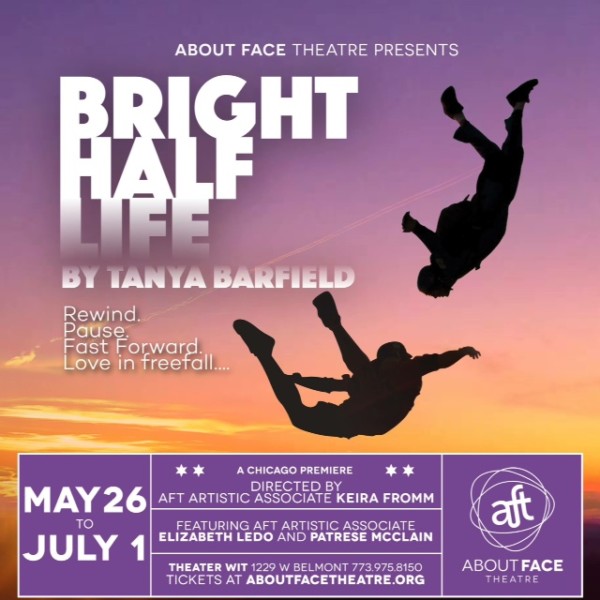 Bright Half Life – A Whole Lot Of Fun

Bright Half Life – A Whole Lot Of Fun 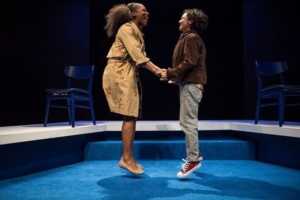 As most of my peers were headed to Windy City multiplexes to view the opening of sure-to-be box office gold, Wonder Woman, I instead headed to the Theater Wit to engage with a couple of women, wonderful in their own right. Pulitzer Prize nominee, Tanya Barfield and About Face Theatre debuted Bright Half Life to Chicago audiences. Just in time to tap the built in spectators of June’s annual month-long, city-wide, Pride celebrations, Bright Half Life, brought its own list of admirable accomplishments. At the top of said list, the winner of the 2016 Lambda Literary Award for Best Play, this Off-Broadway sensation entertained and engaged. With brisk direction by AFT Artistic Associate Keira Fromm, Bright Half Life told the story of an urban dynamic duo and the ups and downs of their very current relationship foibles. The nuance here, their stories are told with rapid-fire dialog, in non-linear vignettes. This contemporary tale of a modern lesbian couple in New York will be remarkably relatable to all audience members. I promise. 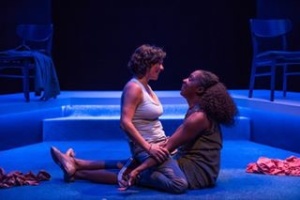 Played over a lifetime, 1985 to 2031 to be exact, Bright Half Life, plotted the course of Ericka (Elizabeth Ledo) and Vicky (Patrese McClain) two everyday urbanites who meet at the office and fall in and out of love over the 90 minute run of the quick paced show. While this endearing and highly entertaining two-character play might sound like the basic plot of a typical rom-com, what made this experience so unique was the verbal volleying between the two leading ladies. The same way Serena Williams dominates a tennis court when she plays, Ledo and McClain presented a persuasive blend of passion, humor, anger, tenacity, determination, drama, flirtation, perplexity, pride and whimsy. Whew! The cornucopia of emotions here are told in short bursts of narrative, a succession of scenes collected and arranged like a random array of colorful post it notes, requisite for a twitter happy audience accustomed to existing on 140 characters or less. Hell, if the current President can govern from his Twitter account, can this story arrangement be that off base?  Between the well earned giggles, there are touches of the legitimate plight to this modern day biracial couple. “I don’t want to have to educate you on your whiteness” quipped Vicky. “I’m not THAT white” Ericka jibed back. Oh Ericka, you are mayonnaise on French bread, wearing SPF 90, white my dear, and the audience wouldn’t want you any other way. Think When Harriett Met Sally, a sophisticated yet silly romp, well worth your viewing time and hard earned dollar. Interjected bits, timed before the Supreme Court’s ruling allowing Same-Sex Marriage, showed just how far we have come, and how far we still need to continue to go as a society. We also shared segments about work, parenting, love, fear, homophobia, flirtation and despair in all their messy splendor. In other words, the same old trials and tribulations every couple must face, only Barfield’s words strung together made Bright so much more entertaining. 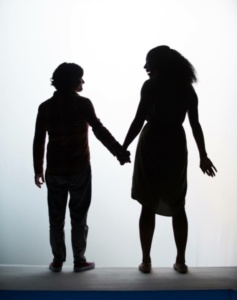 While the ladies on stage worked just as hard as any Amazon on Themyscira (ok, I will be seeing the Wonder Woman movie tomorrow. I am happily sucked into the hype as well!) the creative team behind the scenes did not need bullet proof bracelets of Lassos of Truth to rise to the occasion. Set designer William Boles and lighting designer Christine Binder’s work were so organically mixed, it was tough at times to distinguish one’s craft from the other. The bare bones set allowing both actresses to soar without interruption, both metaphorically and literally. Melissa NG’s costume design proved a mix of contemporary chic and unencumbered fabrics. I don’t know that many Manhattan middle managers who would solitarily remain in ballet flats, but as McClain was at least a foot taller than Ledo, having her in NYC office appropriate stilettos would have punctuated the indifference in that couple’s silhouette even further.

Bright Half Life marked the conclusion of About Face Theatre’s 21st season. As sweet and engaging as I found this play, it is with a little sadness I must also chronicle the departure of current Artistic Director, Andrew Volkoff at the conclusion of this play’s run. I am confident just as many people were in the audience opening night to celebrate his tenure and success with About Face Theatre as were there to check out the Windy City premiere of this award winning play. Volkoff has cultivated a troupe of talented, award nominated, faithful followers who must be equally dejected to see him go, but who are equally compelled to wish him continued success with his next endearers. Under Volkoff’s tutelage, these last four years have cemented ABT as a daring and provocative theatre company, equally adept in comedy and drama, putting sexual and gender identity at the forefront of their signature productions. Soapboxes are often traded for human and honest performances that both challenge and entertain. Borrowing the tag line from Bright Half Life  “Rewind. Pause. Fast Forward. Love in freefall….” could also rightfully describe these last four years of About Face Theatre’s work. Volkoff departs with many well earned victory’s under is belt.  Bright Half Life a fantastic parting gift from Volkoff and company to the people of Chicago. 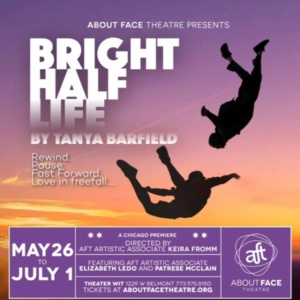 About Face Theatre’s Bright Half Life is now playing at Theater Wit through July 1, 2017