Bringing The Music of The 90’s Back Cruel Intentions: The Musical

Bringing The Music of The 90’s Back Cruel Intentions: The Musical

Cruel Intentions: The Musical, (“The ’90s Musical Experience”) playing off-Broadway at (le) Poisson Rouge, is based on the 1999’s film Cruel Intentions, the modern-day adaptation of Dangerous Liaisons. This cult film stared Reese Witherspoon, Sarah Michelle Gellar, Selma Blair and Ryan Phillippe. Created by Jordan Ross and Lindsey Rosin in collaboration with the original movie’s writer, Roger Kumble, the producers opened the show in Los Angeles in 2015 and brought it to New York in 2017. 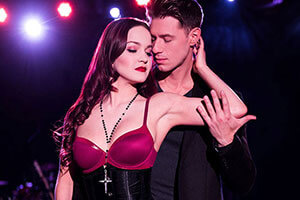 The show is a loving tribute to the film, with an iconic jukebox score. 90’s hits, including tunes from the movie, are integrated into the script. The Verve’s “Bittersweet Symphony,” Counting Crows’ “Colorblind”, mashups  blending Sixpence “None the Richer”, “Marcy”, “Playground,” “Garbage” and *NSYNC propel the storyline. “It Only Happens When it Rains”, “Genie In A Bottle”, “I Saw The Signs”, “Sex and Candy,” “Sunday Morning,” “So Kiss Me,” make you want to sing along. 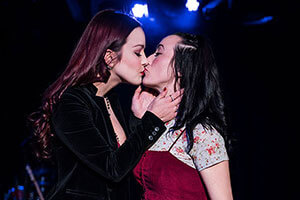 Cruel Intentions follows cunning elite New York teenagers, out for a revenge, sex and scandal, with some fun and games, thrown in at other’s expense. Enter the  the manipulative world of Manhattan’s most dangerous step-siblings, Sebastian Valmont (Constantine Rousouli) and Kathryn Merteuil (Lauren Zakrin). Seduced by revenge and fueled by passion, the two make a bet on whether or not Sebastian can live up to his promiscuous reputation and deflower Annette Hargrave (Carrie St. Louis), the virginal daughter of their elite school’s new headmaster, before term begins. In subplots Kathryn wants Cecile (Jessie Shelton), the new girl at school, turned into a slut. To complicate the mix we have gay friend Blaine (Alex Boniello), his secret football-playing boyfriend Greg (Brian Muller), Cecile’s black music teacher Donald (Matthew Griffin), and her uptight racist mother (Patricia Richardson). In the end Sebastian and Kathryn lose in so many ways. 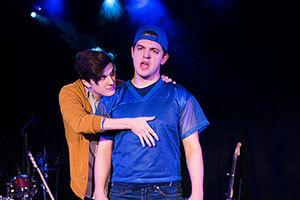 Rousouli, Zakrin and the whole cast  over-act, but this is camp well done. I especially enjoyed the performances of  Ms. Shelton and Mr. Muller. The vocals in the production are extraordinary, with musical theatre performers getting the essence out like true rock stars. Impressive thanks to the musical direction by Zach Sound. 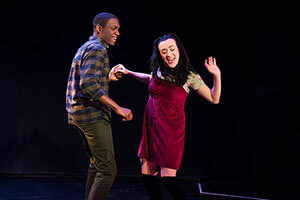 Director Lindsey Rosin offers an immersive experience using several parts of the venue. I loved the use of scrims for the sex scenes and pool. Sadly the lighting design by James Kolditz left some of area’s dark. The choreography by Jennifer Weber is appropriately cheesy. The costumes by Tilly Grimes are perfectly in tune with the film. 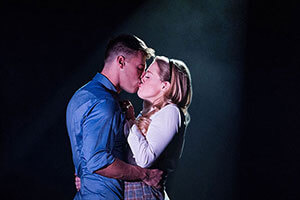 This may not be high art, but it is throughly entertaining, PC incorrect so we can actually laugh at the time frame, with a group of highly talented actors. If you are a fan of the film, this is a must and if you are looking for a rocking good time out, check in to check this out. 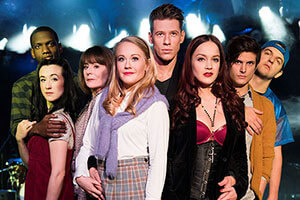 The cast of Cruel Intentions The Musical