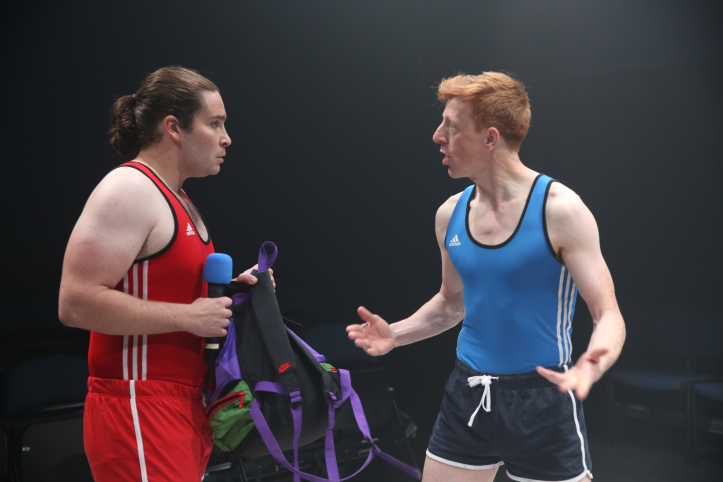 “What did we get ourselves into“, I ask my fellow Theatrejunkie. I was concerned (well, really, just over-tired after Awards season) as the cover of the latest entry at 59E59 Theaters’ Brits Off-Broadway series, Square Go, gives hints of colorfully masked wrestlers battling for supremacy. And the plain white square that the audience surrounds gets one to nervously start thinking and wondering what this show was really all about (I rarely read too much about a show before hand). But Kieran Hurley (Mouthpiece) and Gary McNair (A Gambler’s Guide…) have written a play that is so utterly astounding and fun that I should never have given it a moment’s worry.  Presented by Francesca Moody Productions in association with Seared Productions, the hilarious but deeply moving exploration of teenage male posturing and ego shattering confrontation has far more wiseness hidden underneath that creative mask than anything we could have imagined. It pulses with inventiveness and an intimate connection worthy of the space and your time (just over 60 minutes).

As directed with a sharp sense of teenage angst and comic clarity by the clever Finn Den Hertog (Grid Iron’s Light Boxes), Square Go demands audience interaction. The characters basically beg us with enthusiastic desperation to cheer on the young men in the center of the square. From the Square Go with microphone in hand, Max, magnificently played by the engaging Daniel Portman (Podrick Payne in HBO’s Game of Thrones, S2-8) pleads with the enthusiasm of an ring master MC. Little do we know at the beginning of this tale just how much support this young man really needs in order to survive the afternoon. Only once his buddy Stevie, dynamically portrayed by the very talented Gavin Jon Wright (Citizen Theatre’s Trainspotting), makes his way in to, what we soon learn to be, the high school men’s room, the tense and scary predicament of Max starts to take shape. With strong and pulsating lighting by Peter Small (SoHo’s Angry Alan) and spot-on props and costuming by Martha Mamo (RSC’s The Alchemist), it becomes quite clear that through an unfortunate blurting-out in class by Max, a complex and sad coming of age story conflict of a well liked athlete, and the historical and problematic structure of a young man’s need to prove his conventional masculinity to his class mates, Max is basically a ‘Dead Man’ waiting to walk the walk into almost certain annihilation at the hostile hands of another. His time has come, so says the brilliant candy chewing Stevie, to stand forward as strong as he can and face his own Square Go right down to the finishing.

Now I didn’t know what a Square Go was when I walked into the smallest and most intimate of theaters at 59E59, but it’s basically an old dueling rite of passage for a young Scottish man; a schoolyard slugfest of sorts, that will most likely cause Max to be “eaten alive” by the toughest young man in the school yard, the ape-man himself, Danny Guthrie. It’s an old trap, these ‘Seven Attributes’ of being a man, beautifully and energetically laid out with fire and fury by the fantastic Wright, with solid help from the dynamic movement work of Vicki Manderson (Royal Court’s The Children). They run circles around the ridiculous formulations of manhood, and with the ever looming prospect of Max being beaten to a pulp in a battle demanded by the angry Guthrie, the two wait, hiding in the bathroom, trying to locate the courage and the understanding needed to hold their head high. All this to the sounds of the brilliantly invigorating original music by indie rock band, Frightened Rabbit (Andy Monaghan, Simon Liddell, Billy Kennedy, Grant Hutchison) with associate sound designer Kieran Lucas (Vault’s Orlando) leading a hand. Square Go triumphantly locates a young man’s adolescent fear and fires it up with geek humor, wise ass structuring, and the weight of a solid young man’s friendship, that creates an energy and dilemma that feels so real and perfectly authentic. The recycled imagery of masculinity and manliness are paraded and pummeled forward with perfection by all, demanding the duel to be seen as the most important challenge to a young man’s ego and existence. We gladly gather behind young Max chanting his name in support and pride, and wishing him and his buddy a strong ride into their adulthood.