Broadbend, Arkansas Lush Score is Thrilling and Reminds Us We All Need To Get Back on The Bus 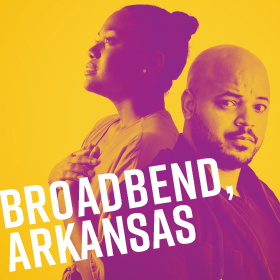 Broadbend, Arkansas Lush Score is Thrilling and Reminds Us We All Need To Get Back on The Bus

Ted Shen’s score to Broadbend, Arkansas, is a cross between Sondehim and Adam Guetell. It is enhanced by Michael Starobin’s orchestrations and gloriously sung by Justin Cunningham and Danyel Fulton. It tells the story of an African-American father and daughter dealing with violence, cyclical injustice of a family in the South.

The show is done in back-to-back monologues interspersed with this amazing music and in this act libretto by Ellen Fitzhugh. In act 1 titled “Just One Q”, we are in 1961, where Benjamin Tate (Cunningham) is working as an orderly in a nursing home in Broadbend, Arkansas. He has to deal with two white women Miss Julynne his boss and Bertha his patient, both were married to the same man. He is the father of twin toddlers, whose mother is mentally ill, so Benny is raising them by himself, with help of his boss, Miss Julynne. He leaves his daughters in Miss Julynne’s care, to drive Bertha to her granddaughter’s home in Memphis. He agrees as he realizes in doing this he is close to the route of the Freedom Riders.

“May 14th. Mother’s Day Sunday in Anniston, Alabama. Many white folk are still in their Sunday best as they close in on the Greyhound… carryin’ chains, bats, metal pipes.”

The Freedom Riders are firebombed, jailed but get back on the bus. benny gets in his car to go back to his girls.

The second act takes place in 1988 and the libretto is penned by Harrison D. Rivers. We meet Ruby (Ms. Fulton), whose son is in the hospital bruised, bandaged, with a breathing tube in his nose. It seems the cops thought he was dealing and beat him severely.

Ruby is one of Benny’s twins who was raised by Miss Julynne and has gone to the cemetery seeking answers. She states:

Her father it turns out was shot by a cop while returning home for almost the exact same reason…being black and the cycle has continued for no reason except the color of their skin and hate.

Benny tells Ruby that his children were his bus. Ruby replies

SOMEDAY THESE WILL PASS

At that my heart broke. We are headed to a civil war if we all don’t get back on that bus and communicate and make peace. We need to start over, but is that possible?

The direction by Jack Cummings III is clear and concise. He allows both Mr. Cunningham and Ms. Fulton to bring out all the characters they inhabit, with layered grace, humor and dignity. It is well done and emotionally gripping.