Broadway and Theatre News: The King and I, Beautiful and Dancing with the Stars, Gettin’ The Band Back Together, Bebe Winans and Parity Productions

Broadway and Theatre News: The King and I, Beautiful and Dancing with the Stars, Gettin’ The Band Back Together, Bebe Winans and Parity Productions

The multiple Tony award-winning Lincoln Center Theater production of Rodgers and Hammerstein’sThe King And I – currently enjoying huge West End success – is to be released in cinemas around the world this autumn by Trafalgar Releasing. TThe King And I : From The Palladium, filmed on stage at the iconicLondon Palladium, will open in cinemas for two nights only on Thursday, November 29, 2018 and Tuesday, December 4, 2018.  Tickets are now on sale.

This unmissable majestic production, directed by Tony Award-winner Bartlett Sher, first opened on Broadway in 2015 for a critically acclaimed 16 month run at The Lincoln Center Theater, this was followed by an unprecedented record-breaking sold out USA tour.  The show then transferred to the London Palladium in June this year, with the three original Broadway lead actors reprising their starring roles – Tony Award-winner (Best Performance by an Actress in a Leading Role in a Musical forThe King and I) Kelli O’Hara, Tony and Oscar nominee Ken Watanabe and Tony Award-winner (Best Performance by an Actress in a Featured Role in a Musical for The King and I) Ruthie Ann Miles.  The London production continues to draw huge critical acclaim, smash box office records – including the biggest grossing week in the London Palladium’s history, taking £1,058,317.50 for an eight performance week, play to packed houses and receive nightly standing ovations. 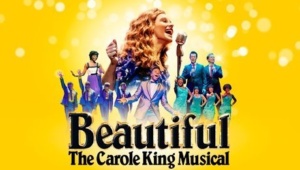 The Tony®, Olivier®, and Grammy® Award-winning smash hit Beautiful – The Carole King Musical will perform live on Monday’s episode of ABC’s “Dancing with the Stars.” The cast of Beautiful lead by North American tour star Sarah Bockel will perform “Natural Woman” for contestants Mary Lou Retton and Sasha Farber as part of “Dancing with the Stars.” The wild popular program airs locally on WABC-7 at 8 PM ET.

For five years, Beautiful, the Tony and Grammy Award-winning musical, has thrilled Broadway with the inspiring true story of one woman’s remarkable journey from teenage songwriter to the Rock & Roll Hall of Fame.

From the string of pop classics Ms. King wrote for the biggest acts in music to her own life-changing, chart-busting success with Tapestry, Beautiful takes you back to where it all began – and takes you on the ride of a lifetime.

Featuring over two dozen pop classics, including “You’ve Got a Friend,” “One Fine Day,” “Up on the Roof,” “You’ve Lost That Lovin’ Feeling,” “Will You Love Me Tomorrow,” and “Natural Woman,” this crowd pleasing international phenomenon is filled with the songs you remember – and a story you’ll never forget. 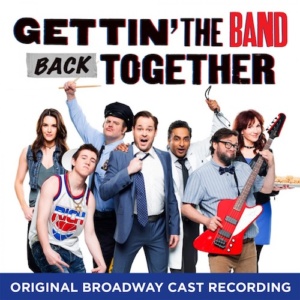 Gettin’ The Band Back Together

SH-K-BOOM RECORDS has announced that Gettin’ The Band Back Together — Original Broadway Cast Recording has been released in digital and streaming formats today, Friday, September 28. The new musical comedy  which recently ran at The Belasco Theatre (111 W 44th Street), was directed by Tony Award winner John Rando and choreographed by Chris Bailey. The album is available at iTunes, Amazon, Spotify, Apple Music, Google Play or wherever digital music is sold and streamed. Order the album at http://ghostlightrecords.com/gettin-the-band-back-together-original-broadway-cast-recording.html

When Gettin’ The Band Back Together opened this summer, Variety exclaimed, “It feels so good to laugh real laughs on Broadway.” According to Deadline, “with high-spirited laughs and an exuberant cast, this playful musical is infectious.” WCBS-FM Radio raved “It’s rockin’, sexy and flat-out funny.” 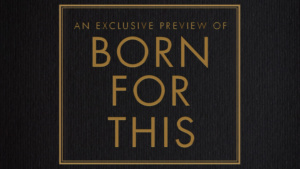 The producers of the Broadway-bound musical Born For This, today announced that Gospel and R&B music legend Bebe Winans will host a one-night-only concert previewing the music from his original musical Born For This on Monday, November 5 at 7 p.m. and 9:30 p.m. at Feinstein’s/54 Below (254 W. 54 St). For tickets please visit https://54below.com/events/born-for-this/

Sharing the Feinstein’s/54 Below stage with Mr. Winans will be director Charles Randolph-Wright (Motown) and members of the cast from last summer’s pre-Broadway tryout in Boston including Donald Webber Jr. (Hamilton), Loren Lott (Once on this Island), Kristen Wyatt (Annie), Nita Whitaker (Ragtime), Liisi LaFontaine (Dreamgirls) and Maddie Shea Baldwin (Bright Star). The evening will introduce the Born For This story and some of the original songs from the Broadway aimed musical, which also played regional engagements in Atlanta, Washington D.C., and Los Angeles.

Theatre production company Parity Productions, a producer of new work that ensures they fill at least 50% of the creative positions (playwrights, directors, and designers) on their productions with cis women and/or trans and gender nonconforming (TCNG) artists, has awarded two commissions to Liz Kerinfor Stop-Motion and Azure Osborne-Leefor Mirrors. The ceremony took place on Wednesday, September 26 at the Second Annual Parity Gala at Gotham Comedy Club.

The awards were presented by last year’s Parity Productions commission-winning playwrights, Mêlisa Annis and Else C. Went. Parity Productions also announced the next phase of their partnership with Show-Score, the largest online fan community for theater lovers, to provide an increased level of comprehensive marketing and promotional support for Parity’s Qualifying Productions.

Parity Productions awards two commissions annually to one cis woman playwright and one TGNC playwright who have demonstrated a singular talent for storytelling. Liz Kerinand Azure Osborne-Leewill receive $2,500 each and developmental support for their plays with an option for production.

Liz Kerin(she/her) is a graduate of the Dramatic Writing Department at NYU’s Tisch School of the Arts, Liz has a background in screenwriting as well as live theatre. Last year, her full-length play Stop-Motionwas selected for the Botanicum Seedlings development workshop at Theatricum Botanicum and was also shortlisted as a semi-finalist at Premiere Stages. In 2018, the play was selected for The Road Theatre’s annual playwright’s festival, where it received a reading. Her work has been seen onstage at New York University, FringeNYC, 440 Studios, The Producer’s Club, and with the Kennedy Center American College Theatre Festival. On the film and television side, Liz was featured on the Tracking Board’s Young and Hungry List, which names the top up-and-coming screenwriters in Hollywood, and her feature script PYONGYANG HOME VIDEO made the 2016 Hit List. She’s currently developing a television series and adapting a YA novel to screen. Liz is also an author, and her debut novel The Phantom Forest will be released by Inkshares in early 2019. For more, please follow along on Twitter: @Liz_Kerin.

Parity Productionsis a formidable producer of new work that ensures that they fill at least 50% of the creative positions (playwrights, directors, and designers) on their productions with cis women and/or TGNC artists. In addition to producing their own work, they actively promote other theatre companies that follow their 50% hiring standard. Artistically, they develop and produce compelling new plays that give voice to individuals who rebel against their marginalized place in society. Parity Productions is a 501(c)(3) not-for-profit theatre company formed in 2016 by international award-winning director Ludovica Villar-Hauserwith its roots in two other previous not-for-profits founded by Villar-Hauser: VH Theatrical Development FoundationandWorks by Women.