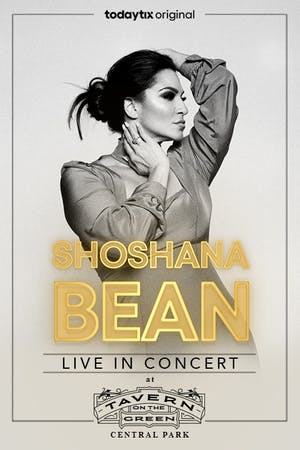 TodayTix Originals is bringing Broadway back to Tavern on the Green (Central Park West at 67th Street) with Broadway at Tavern, a special series of live concerts from stars of the New York stage under the stars at New York’s most iconic eatery. Safely reuniting Broadway’s best artists with audiences, this exclusive TodayTix Originals concert series will launch on Tuesday, May 25 at 8:30pm ET with a one-night-only performance by original Hamilton cast member and star of Steven Spielberg’s West Side Story, Tony Award nominee Ariana DeBose, followed by performances on Tuesday, June 8 & Wednesday, June 9 at 8:30pm ET by Broadway star and recording artist, Shoshana Bean.

Over the course of many decades, Tavern on the Green has been intimately connected to the world of Broadway. In 1978, the City of New York threw a star-studded party at Tavern to launch its now legendary “I ❤ NY” ad campaign touting Broadway as the spiritual heartbeat of New York. That campaign has been widely credited with bringing the city back from the brink of bankruptcy, transforming it into the internationally beloved cultural mecca it is today. Over the years, countless Broadway productions have celebrated their opening nights inside Tavern’s glittering spaces, including Wicked, Cats, Death of a Salesman, Dreamgirls, and the all-night Hamilton and Hair Tony Awards celebration parties.

TodayTix Originals’ Executive Producer, Tony Marion commented, “If any two New York institutions are synonymous with the city itself, it’s Tavern on the Green and Broadway. Simply put, Tavern is the perfect venue in which to reunite this incredible line-up of New York-based mega talents with the fans who adore them. For those of us who have spent the last 14 months yearning for live performance and a reason to get dressed up, this is going to be the ultimate tonic.”

Tickets are currently on sale exclusively at TodayTix.com, starting at $40. In line with social distancing protocols, tickets will be sold in pods of 2 and 4, and will require that each pod contain only members of the same party. Doors will open at 7:30pm to allow audience members to enjoy dinner and drinks before the show. A full food and beverage menu will be available for a la carte purchase to fully enjoy the Tavern experience. The concert series will run throughout the summer and into the fall. Additional performers in the line-up will be announced shortly.

Broadway at Tavern will be the flagship effort of TodayTix Originals, the division of TodayTix Group dedicated to creating and curating original content.  Additional engagements this series will be announced shortly.

All events will strictly adhere to the New York Department of Health (DOH) COVID-19 protocols for outdoor cultural events and gatherings. All audience members will be required to wear masks at the events, and temperature checks will be mandatory before audience members enter the venue.

A Central Park staple, the historic Tavern on the Green has been capturing the spirit of New York City since 1934. In 2014, co-owners Jim Caiola and David Salama (previously of Beau Monde and L’Etage in Philadelphia) re-opened Tavern with a completely redesigned space and menu that harkens back to the original landmark featuring warm, celebratory dining spaces, seasonal American fare, classic cocktails, and a robust wine list. Jim and David selected Bill Peet (formerly of Asia de Cuba, Café des Artistes & Patroon) as Executive Chef for the revival of Tavern, who has reinvigorated the me

Stephen SorokoffMay 10, 2022
Read More
Scroll for more
Tap
Dr. Nesmith or: How I Learned to Stop Worrying and Like the New Micky Dolenz Album – by Anthony Pomes
What to Watch in The New Year: May 15