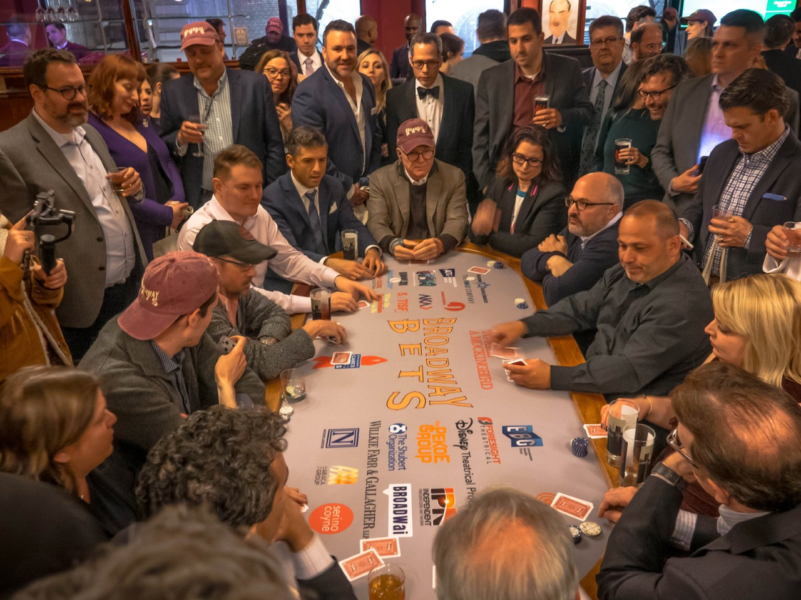 Broadway stars, industry members, and theatre fans participated in an evening of Texas Hold ‘em that kicked off with 28 poker and 280 card players, concluding with 12 players at the championship table.

The ultimate face-off featured ​Elliot Greene​, executive vice president of The Shubert Organization, and actor ​Ted Koch​ (​To Kill a Mockingbird​). Surrounded by an energetic crowd, both players went “all in” after rounds of intense play. Ultimately, Greene was crownedBroadway Bets ​champion when he bested Koch with a pair of queens. As winner, Greene received four days and three nights for two at Caesar’s Palace in Las Vegas, including airfare, hotel and show tickets.

The “Royal Flush” bar sponsor for this year’s event was Broadway hit and Tony Award nomineeTo Kill a Mockingbird​.

Broadway Bets’​ founding co-chairs are ​Paul​ ​Libin​, president emeritus of the Broadway Cares/Equity Fights AIDS Board of Trustees and executive vice president emeritus of Jujamcyn Theaters, and ​Robert E. Wankel​, president and co-CEO of The Shubert Organization and president of the Broadway Cares Board of Trustees. ​Micah Hollingworth​ of BROADWai, ​Mark Shacket​ of Foresight Theatrical and ​Brett Sirota​ of The Road Company returned as tournament directors.

Broadway Cares/Equity Fights AIDS​ is one of the nation’s leading industry-based, nonprofit AIDS fundraising and grant-making organizations. By drawing upon the talents, resources, and generosity of the American theatre community, since 1988 Broadway Cares/Equity Fights AIDS has raised more than $300 million for essential services for people with HIV/AIDS and other critical illnesses across the United States.

Broadway Cares/Equity Fights AIDS​ is the major supporter of the social service programs at The Actors Fund, including the HIV/AIDS Initiative, the Phyllis Newman Women’s Health Initiative and the Samuel J. Friedman Health Center for the Performing Arts. Broadway Cares also awards annual grants to more than 450 AIDS and family service organizations in all 50 states, Puerto Rico and Washington, D.C.