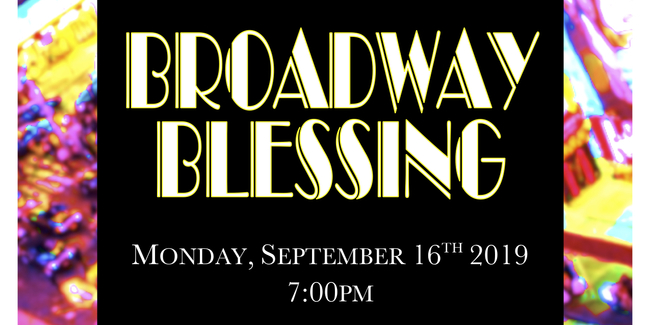 For One Night Only on Monday, September 16 at 7pm at St. Malachy’s Church, The Actors’ Chapel 239 W. 49th Street, the 2019 22nd Anniversary Celebration of Broadway Blessing will take place.

Chita Rivera is scheduled to give a special tribute to Hal Prince, Roma Torre will interview Stephanie Block, Jill O’Hara will reprise “Good Morning Starshine” from Hair, Conor Ryan singing “Good To Be Alive” from Desperate Measures, David Friedman’s newest hit Something Happened plus other amazing Broadway talent to be announced. George Drance, SJ (La MaMa, Magis Theatre) will emcee again this year, and the evening will culminate with a moving candle-lighting ceremony led by clergy from various churches and Rabbi Jill from the Actors’ Temple. Under the leadership of Stephen Fraser as Musical Director, the Broadway Blessing Choir and Instrumentalists will also perform.

Designed as a program of song, dance and story to celebrate the spirit of the new theater season, Broadway Blessing was founded by Retta Blaney and started in 1997.

Always free and open to the public, Broadway Blessing includes Broadway and Off-Broadway talent and is followed by a reception. Past participants have included Lynn Redgrave, Marian Seldes, Frances Sternhagen, Kathleen Chalfant, Billy Porter, Tituss Burgess, and in recent years talent from shows such as Come From Away, Perfect Crime, Something Rotten, Phantom of the Opera, and Desperate Measures, just to name a few.

The Actor’s Chapel St. Malachy’s was founded in 1902, and “The Actors’ Chapel” was established in 1920. St. Malachy’s Church – The Actors’ Chapel is a spiritual oasis in New York’s heart for Broadway artists and fans alike. Chiming “There’s No Business Like Show Business” every day, a half hour before curtain, the chapel has welcomed such theater greats as George M. Cohen, Douglas Fairbanks, Rudolph Valentino. Florence Henderson, Elaine Stritch, Danny Thomas, Bob and Dolores Hope, Antonio Banderas, Liam Neeson, and countless others. Under the leadership of Fr. John Fraser (pastor) and Stephen Fraser (director of music) it continues to offer programming to the Broadway community and develop the talent and work of the next generation of Broadway stars.