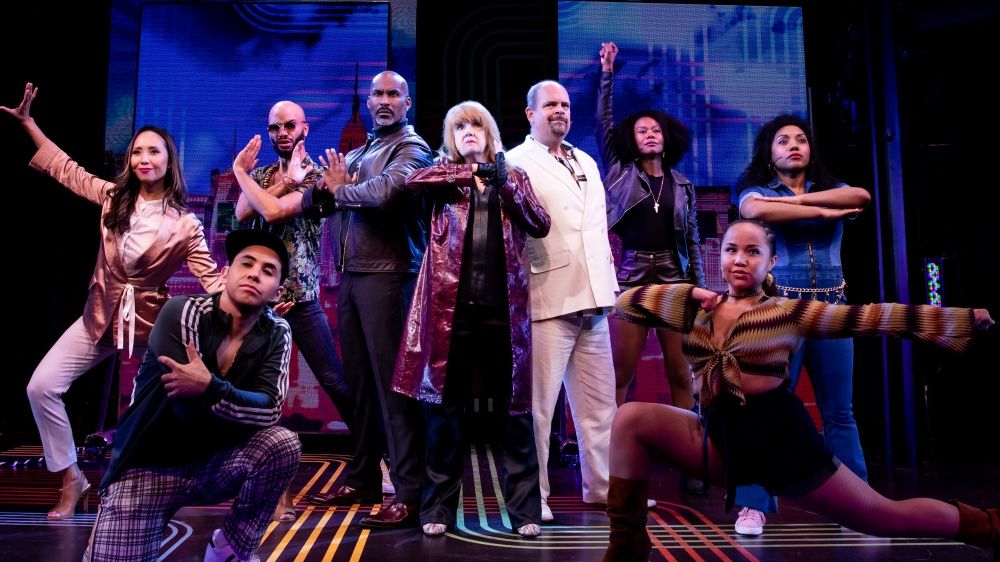 Annie Golden is a woman of a certain age, currently on Netflix’s Orange Is the New Black, starring in the Off Broadway musical Broadway Bounty Hunter. If you do not know Ms. Golden’s career or are not hip to inside theatre jokes, it’s possible this show will make zero sense to you. This is an insiders show, that spoofs the 70s-era, kung-fu movies and musical theatre. It would have made more sense to do a spoof of “Get Smart”, using Annie as Maxwell Smart type and gearing it to any age. Right now, the audience demographic is not clear.

Before Joe Iconis’, Be More Chill opened on Broadway; he premiered this show at Barrington Stage Company back in 2016.

Ms. Golden plays herself as a washed-up actress still using a resume from days gone by and has been mourning the death of her producer husband for 10 years. Her apartment is a homage to her career with posters and playbills of Hair,  Assassins and The Full Monty on the wall. Her album cover from her ’70s- punk band The Shirts is also prominent. Having a really bad day, Annie is approached by Shiro Jin (Emily Borromeo), the leader of a group of bounty hunters. Ms. Jin is a karate expert whose moto is “One part animal instinct. One part primal rage. One part valiant courage and the wisdom that comes with age”. Annie is partnered with lone wolf Lazarus (Alan H. Green), one of Shiro’ top bounty hunters. They are immediately given an assignment to track down the “drug-pushing pimp daddy” Mac Roundtree (Brad Oscar). Turns out everyone, except Lazarus has used Annie and she must dig down and find her inner warrior.

The book written by Iconis and his collaborators Lance Rubin and Jason Sweettooth Williams, just misses the mark. This creative team has re-embraced Mr. Iconis’s creative theme of pill popping; a better life through pharmaceuticals as they would say in the 70’s.

The cast is talented with Ms. Golden rocking it out with her voice, She truly has a magnificent instrument, but we don’t get much else out of her, other than poor pitiful me. We needed to see that kick ass woman emerging to save the day and show the world age is just a number. Mr. Green nails the outrageous machismo and Luther Vandross vocals. Brad Oscar needed more, but nails what he has and makes the most out of the role. Badia Farha, Jasmine Forsberg, Omar Garibay, Jared Joseph and Christina Sajous. are a wonderful ensemble cast and give high energy performances.

Director-choreographer Jennifer Werner gives lackluster choreography as well as disjointed direction. Where was all that fabulous 70’s groove? Her dancers give their all, but it all looks the same. Sarafina Bush again misses the mark with costumes that again don’t give off that 70’s vibe. Brad Peterson’s projections however, are well done and make a bare set look flush.

The most disturbing part of this show is Iconis’s music. I am a big fan of Iconis and his music and lyrics for Be More Chill. In Broadway Bounty Hunter, the songs just seem unfinished and just when you think you have a song of note, it feels as if they added another unfinished song and then another to make one massively confusing melody. Thank-God for the orchestrations by Charlie Rosen. Rosen managed through the trumpet section to channel Isaac Hayes, the music of Gloria Gayner, John Williams, Curtis Mayfield, Herb Albert and Lalo Schifrin. Seriously brilliant. He made my night.

I love any opportunity for older performers, who are still rocking their game to be highlighted and I would go anytime, anywhere to see Ms. Golden sing, as I am now a fan of that, but Broadway Bounty Hunter just fizzles.

Genevieve Rafter KeddySeptember 14, 2022
Read More
Scroll for more
Tap
Moscow Times 6 is Like Watching a Kids in a Sandbox
Project Shaw Brings to Life The Stepmother