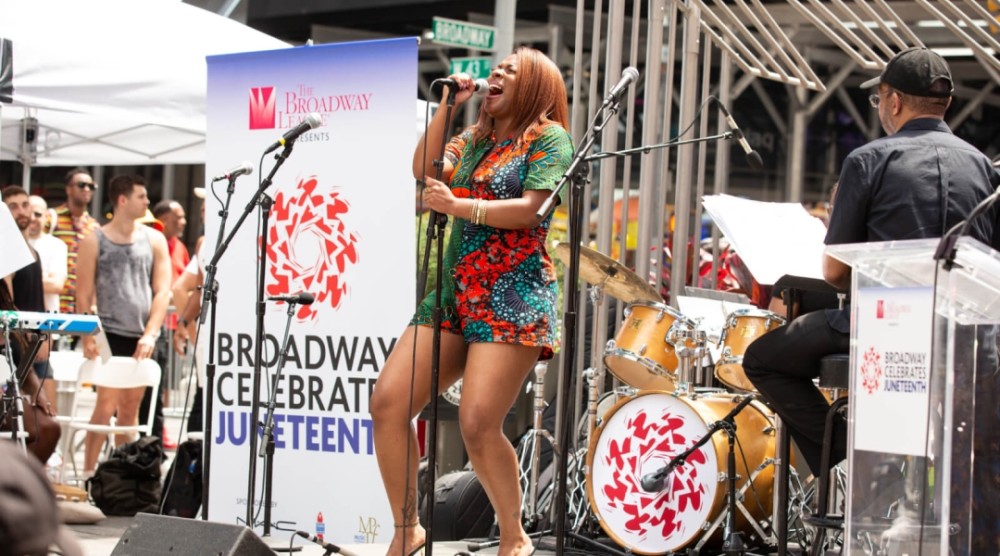 Broadway Celebrates Juneteenth starts at noon and is a free 90-minute concert featuring Black performers, and allies, performing their own works of art, with their song, dance, and poetry accompanied by live music provided by The Music Performance Trust Fund. The event features cast members from Broadway shows including: The Book of Mormon; Company; Dear Evan Hansen; Funny Girl; The Minutes; Moulin Rouge! The Musical; Mr. Saturday Night; Paradise Square; The Phantom of the Opera; and Tina – The Tina Turner Musical. The afternoon celebration also includes kids from current and recent Broadway shows performing a rendition of “Young, Gifted, and Black.”

Broadway Celebrates Juneteenth is open to all and features Black performers, and allies, from a variety of Broadway shows performing their own works of art, with their song, dance, and poetry accompanied by live music provided by The Music Performance Trust Fund. In addition, the event will welcome notable guest speakers to celebrate this momentous day.

The goal of Black to Broadway is to inspire deeper engagement with, awareness of, and access to Broadway for all Black people. Created by The Broadway League in 2019, and originally called Let’s Do Broadway, this initiative is an industry-wide celebration of the Black community on Broadway—on stage, in the audience, behind the scenes, and as leaders in the Broadway community.

Read more about Black to Broadway.

Suzanna BowlingJanuary 22, 2023
Read More
Scroll for more
Tap
The Drama Desk And You Are There: The Performers and Presenters
The Glorious Corner