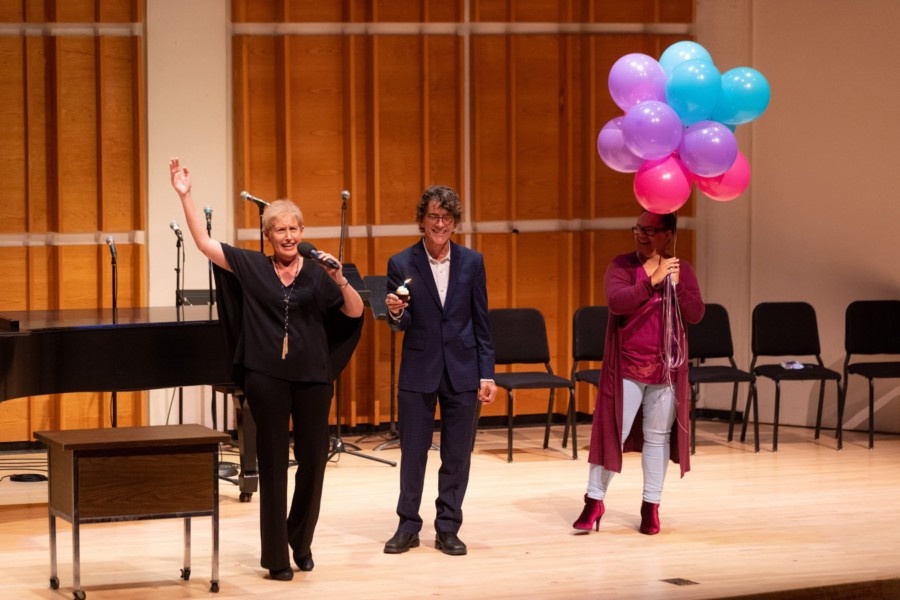 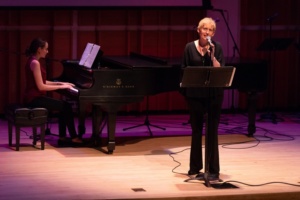 First up was a new musical called XY by Oliver Houser, developed by Hunter Bird. XY follows Chris, an intersex man who is raised as a girl for the first eleven years of his life. At 26 years old Chris is a lonely fitness instructor who has transitioned back into being a man and resists all personal contact. He is estranged from his mother and is haunted by memories of his female ten-year-old self, Christine. Chris’s feelings of unworthiness drive him to romantically pursue Nuni, one of his female workout students, in an attempt to prove his masculinity to himself. As Chris is challenged to become more vulnerable in the relationship and begins to develop feelings for Nuni, his memories, which follow Christine’s attempt to assert his male identity despite his mother’s insistence that he is a girl, haunt Chris with increasing intensity. 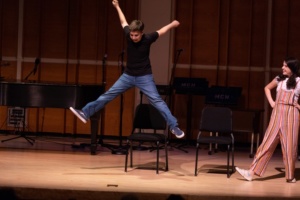 XY has a lush score that is extremely melodic but it reminded me of Anna Zigler’s 2016 play Boy, which played at The Lion Theatre on Theatre Row. The show was based on a memoire by David Peter Reimer. There will be another chance to see this show at NAMT. Jennifer Blood, Joshua Turchin, Peter Smith and the adorable Zoe Wilson performed. 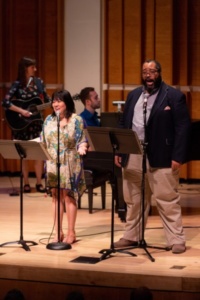 Next up was Go! Go! Gilgamesh by Pheobe Kreutz.  This show started at the 2017 FRIGID Festival. The epic of the Gilgamesh is the first story ever written down by human beings. Sex, power, violence, love, guilt, and death involves a classic tale. Long-time Antifolk star and member of the controversial Pizza Underground, Phoebe Kreutz wrote the whole show on her guitar. Despite the wonderful cast of Ann Harda, Eddie Cooper, Jeffrey Schechter and Justin Colombo, neither my guest or I were impressed by this piece. 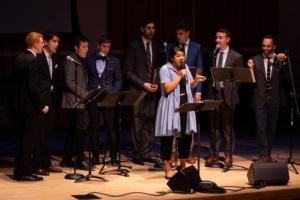 The cast of Key Change

Ben Wexler’s Key Change is a acapella musical based on the all male singing group the Whiffenpoofs at Yale. When a female wants to become a part of the group, friendships and clashes occur. When one of the members comes out as gender binary, it kicks the action up to a new level. With a perfectly sung score, the blending of voices and a topical premise Key Change is sure to be on its way to Broadway. The cast starred a terrific Kuhoo Verma as girl who longs to sing with the boys, Sam Bolen, Brennan Caldwell, Nimal Eames-Scott, Benji Goldsmith, Scott McCreary, Alex Ratner, Solon Snider and Ben Wexler, all former members of the Whiffenpoofs. 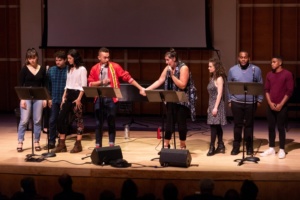 Nikola Tesla Drops The Beat,  is an electronic pop musical about one of history’s greatest inventors, best described as Hamilton meets Tesla, by the recent Jonathan Larson Prize-winning writer Nikko Benson & Ben Halstead. This story follows a misunderstood genius. A rivalry for the ages. An idea that would change the world forever. Turning the volume up on one of our time’s most influential (and controversial) innovators. This epic battle of Nikola Tesla vs. Thomas Edison is set to the rhythm of a brand-new beat, in a modern and mesmerizing musical that will leave you speechless… and electrified. The show stared a fabulous Jordon Bolden, Ally Bonino, Catherine Wake and ensamble.

Of all the shows this night this show was electrifying and both my guest and I can not wait to see this on Broadway. We have included a video done at Joe’s Pub in 2016 to give you a taste.

Liz Callaway became a pigeon closing off the evening with a heartbreaking “What My Wings Are For” also from Nikola Tesla Drops The Beat.

My guest and I left the Kauffman Center both singing “Frequency” from Nikola Tesla Drops The Beat.