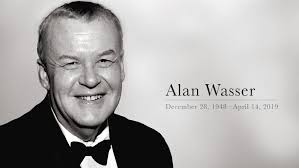 Alan Wasser served as general manager for over 60 Broadway productions.

Mr. Wasser helped form Foresight Theatrical LLC, which continues to offer producing, general managing, booking, press, and other theatrical resources for stage productions around the world. Foresight’s Broadway productions include the upcoming Moulin Rouge!, The Prom, King Kong, as well as The Lifespan of a Fact, Escape to Margaritaville, The Band’s Visit, Charlie and the Chocolate Factory, Tuck Everlasting, American Psycho, Misery, Disgraced, and Kinky Boots. The group was also the general manager for the Tony Awards from 2009 to 2012.

To honor this man who did so much for Broadway, The Majestic, Marquis and St. James Theatres will dim their lights on May 20 for one minute next Monday at 6:45 p.m., in memory.

In a press release Thomas Schumacher, chairman of the Broadway League stated “Alan Wasser — in his work on Cameron Mackintosh’s global hits — innovated ways to produce theatre at a higher level and a greater scale than had ever been possible before.  But, foremost, he was loved for his generosity and 22 years ago I became one of the many Alan welcomed to Broadway with counsel and friendship. He was an extraordinary theatrical manager and an even better friend.”

Charlotte St. Martin, president of the Broadway League, stated “His dedication and committed leadership helped the League to become the organization it is today. In short, Alan made a difference.”

Suzanna BowlingSeptember 15, 2021
Read More
Scroll for more
Tap
Musicians on Broadway Brings in The Big Bucks
Rachel Brosnahan To Be Honored By Covenant House at Star Studded A Night of Broadway Stars