Broadway For All Holiday Benefit: Cabaret At The Circus Presented by Tony Shalhoub 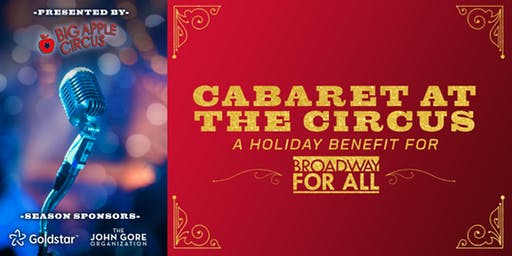 Broadway For All Holiday Benefit: Cabaret At The Circus Presented by Tony Shalhoub

Broadway For All, a non-profit organization that aims to transform the American stage and screen to reflect the diversity of America, will host its 2nd annual holiday benefit, Cabaret At The Circus, under the tent at the Big Apple Circus at Lincoln Center, NYC on Monday, December 9. Proceeds raised at the event will support Broadway For All’s ongoing commitment to shaping a new generation of artists, leaders, and advocates who are impassioned to create inclusive work for all. Tickets can be purchased by visiting BroadwayForAll.org.

The evening’s program will be presented by Emmy and Tony Award winner Tony Shalhoub (“The Marvelous Mrs. Maisel”; The Band’s Visit) and the benefit will honor Broadway For All Faculty Member and Emmy and Grammy Award-winner Kristolyn Lloyd (Dear Evan Hansen), Pulitzer finalist and Tony nominee Heidi Schreck (What The Constitution Means To Me), and Tony-winning producer Jana Shea (Slave Play; Sea Wall / A Life).

“I am humbled to support such a tremendous organization like Broadway For All,” says Tony Shalhoub. “Last year’s event was a blast, and I am excited to return and support this movement to make quality arts training and access to theatre not a privilege, but a right for all.” This year’s event will feature cabaret performances from Broadway For All students and Broadway stars including Amber Iman (Shuffle Along), Megan McGinnis (Come from Away), Heidi Rodewald (Passing Strange; Stew & the Negro Problem), and Krysta Rodriguez (Hercules), among others. Julie McBride (SpongeBob SquarePants: The Broadway Musical; Ink) is the cabaret’s music director.

“We can’t wait to celebrate with our community of artists and supporters under one tent and to honor some of the most inspiring individuals in our industry who embody our organization’s core values: artistry, professionalism, and compassion,” says Broadway For All Founder & President, Osh Ghanimah. “We are full of gratitude for our friends at Big Apple Circus for pulling out all the stops to make this benefit an unforgettable night.”

Initially founded through the Presidential Public Service Fellowship program at Harvard University in 2012, Broadway For All is a movement with a mission to transform the American stage and screen to reflect the diversity of America. Their flagship summer conservatory brings together artists from impoverished communities with those from middle and upper income backgrounds for world-class training led by Broadway, television, and film professionals.

Through its year-round Access For All program, Broadway For All also sends thousands of underserved NYC students to experience Broadway shows each year. To learn more, visit BroadwayForAll.org. Broadway For All’s season sponsors include Goldstar, Allstate, and The John Gore Organization. Broadway For All’s Cabaret at the Circus is presented by Big Apple Circus.The cabaret’s Host Committee is Co-Chaired by Samara Daly, Jennifer Friedland, and James Trezza.