There are 37 cast members in Natasha, Pierre & the Great Comet of 1812, not to mention the orchestra, crew and staff that help keep the show running. It was obvious that when Josh Groban left the show, the shows attendance would drop. Smartly the producers hired multi-platinum singer-songwriter Ingrid Michaelson to make her Broadway debut. Brittain Ashford, who originated the part, was asked to take a temporary leave from the show to help ticket sales. Not only did she agree to help her fellow cast members but Ingrid and Brittain did a duet together to help promote the show. There was no animosity, no backlash because they were both white.

As Ingrid leaves the show Natasha, Pierre & the Great Comet of 1812 are financially in need of an audience draw. Enter Mandy Patinkin who has a huge TV and Broadway fan base. He agreed to come in and help, but had a small window in which to participate. Okieriete “Oak” Onaodowan, who originated the roles of Hercules Mulligan and James Madison in Hamilton, was contracted to play to role of Pierre until September 4th. The producers believed that “Oak” would be ok with this decision and planned on having him return, however Mr. Onaodowan took to social media. 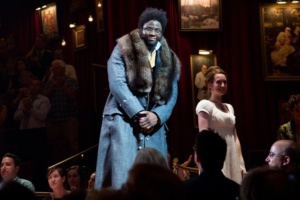 I always try to speak from my heart with love after listening. I have listened. I’m more than grateful for all the love and support the community and fans have shown me.  It makes what we do and deal with as artists easier when you know many people do indeed have your back and that you are valued for your work. In spite of everything, I am grateful to have had the time to bring this character to life with a remarkable cast that truly make the Imperial Theater a sacred place every night.  My pops would always tell me to be aware of the company you keep.  I’m fully aware of the remarkable talents this cast holds, with Denee at the helm.  My work is just a reflection of what they bring, have brought and will continue to bring, be it me, Mandy, whomever is co-pilot to Denee. AUGUST 13th WILL BE MY LAST SHOW! I will not be returning. So make room in your schedule between now and Aug 13th. Come through, have a drink, and let’s celebrate the time we have because as always, that’s all we are guaranteed.  We make the most of the gifts we are given and I’m driven to deliver a defining moment in time, with every line I let loose on stage. #MynameisOak #TheHomiesRollDEEP#TheFansMadeRoom #WeAreTheChange #IPierredAndProspered#MyPierreWillPerish #August13th #OnwardsAndUpwords #KatyPerry#SkateyPierre?

Mandy Patinkin withdrew e-mailing a statement to The New York Times on Friday afternoon. “My understanding of the show’s request that I step into the show is not as it has been portrayed and I would never accept a role knowing it would harm another actor,” Mr. Patinkin said. “I hear what members of the community have said and I agree with them. I am a huge fan of Oak and I will, therefore, not be appearing in the show.”

The backlash has became a racial controversy, which was not the case. What nobody is taking about here is Broadway is an expensive business and audiences want to see established names. Natasha, Pierre & the Great Comet of 1812 has a huge cast and expensive running costs. They have not made their investors money back and only won two technical Tony Awards. Sadly Mr. Onaodowan (102K on twitter) does not have a big enough fan base to keep a show running. Mr. Patinkin does (11.3K on twitter). This is not a black and white issue, but a reality.

How will social media respond if the show now has to close and all those actors, orchestra, crew and staff lose their jobs. It is a possibility.