Broadway In Bryant Park is Back 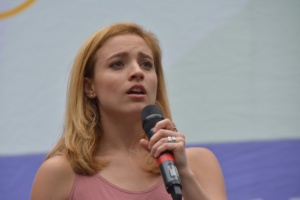 Broadway In Bryant Park is Back

Broadway and off-Broadway will be performing outdoors for six Thursdays as part of the 2018 Broadway in Bryant Park series. Performances are from 12:30-1:30pm, but arrive as early as 11:00am to get a great seat. The Bryant Park Stage, is located at 6th Avenue between 40th and 42nd Streets in New York City. Lawn seating is first-come, first-serve. Broadway in Bryant Park is presented by 106.7 LITE FM.

Co-Hosts: Catherine Russell and the cast of Perfect Crime

Co-Host: Renée Taylor from My Life on a Diet

On a Clear Day You Can See Forever

Co-Hosts: Cast of The Play That Goes Wrong

Co-Hosts: Cast of The Play That Goes Wrong

Pre-Show: Vitaly: An Evening of Wonders

The Broadway in Bryant Park schedule is subject to change pending weather conditions. In the event of performance cancellation, all efforts will be made to reassign previously scheduled shows into a remaining performance date.