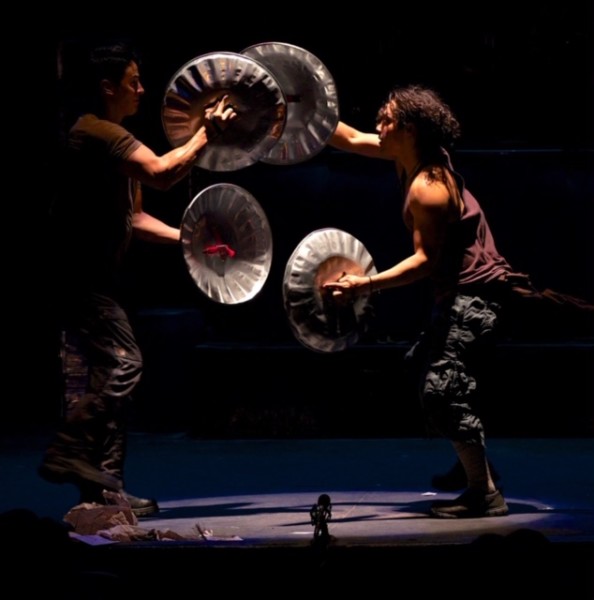 Broadway in Chicago presents STOMP – Bringing Heat to the Holidays

Broadway in Chicago presents STOMP – Bringing Heat to the Holidays 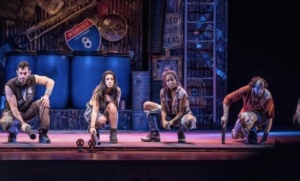 STOMP is back in Chicago, bringing their signature collection of push brooms, maracas and banging trash can lids as alternative programming to all things holiday. While anyone walking down State Street or Michigan Avenue is quite familiar with street musicians playing empty barrels as instruments for tips, STOMP continually brings this particular art form to new heights, now for almost two decades. STOMP’s innovative floor pounding, pipe whacking, shopping cart whirling and more, is truly fun for the entire family. Coordinating a team of solid performers who communicate using wordless sound to an engaged audience, only using the pulsating rhythms their bodies produce to tell their personal stories. Truly, not a word is spoken, but the individual vignette’s meanings are easy to decipher during the nonstop, quickly paced 90 minute performance. 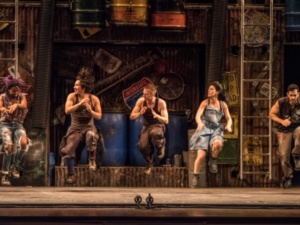 The artists play everything from discarded plastic grocery bags to metal garbage cans, pounded on rhythmically like drums. From plumbing fixtures to old kitchen sinks, all the while finding unique texture of sounds from the rhythms of the metal clanging.  Abandoned super market shopping carts spun across the stage in rapid fire succession. Even the most delicate tear of a newspaper page, carefully manipulated, filled quiet voids from center stage. 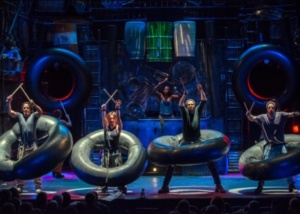 The cast is always filled with young and good looking talent assembled to both amuse and entertain with the continued clanging of old hubcaps, dustbins, radiator hoses and janitor brooms repurposed to coordinate the syncopated, nonstop actions of the collective. The current racially diverse troupe included Kayla Cowart, Jonathan Elkins, Desmond Howard, Alexis Juliano, Guido Mandozzi, Artis Olds, Jeremy Price, Krystal Renee, Ivan Salazar, Cade Slattery, Steve Weiss and Joe White.  Each performer was given individual opportunities to shine. Whether snapping, clapping or tapping, the audience was having just as much fun as the performers on stage. The cast even used the simplicity of a finger snap and hand clap to test the audience’s rhythmic skills. We did alright as a group, even with the ever increasingly complex clapping segments.

Co-founder/director Luke Cresswell stated the cast can “make a rhythm out of anything we can get our hands on that makes a sound.” From high flying drummers, cartwheeling broom sweepers, or toe tapping hoofers, STOMP is a nonstop, entertaining powerhouse from beginning to end.  Playing for over twenty years, STOMP has won numerous accolades including an Oliver Award for Best Choreography (London’s equivalent of a Tony Award), A New York Obie Award, a Drama Desk Award for Unique Theater Experience, and has been invited to perform at both the Emmy and the Academy Awards. The tight synchronization and creativity needs to truly been seen to be appreciated.  Judging by the packed theater and vast age range of those who attended the night I was there, Chicagoland is actively along for the ride this holiday season. 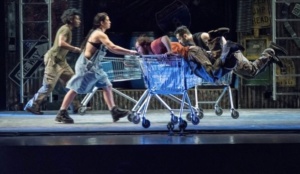 STOMP is best described as a unique live theatrical experience. There are no recognizable songs in the soundtrack. There is no orchestra playing in the pit. All of the sound coming from the stage is produced by the individual cast members pounding, tapping, sweeping and drumming on manmade and found objects. They all let you see them sweat, which made this all the more engaging. 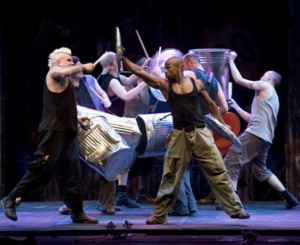 A warning for the patrons in the first few rows. The Broadway Playhouse Theatre is an intimate performance space. Watch out for the occasional broom bristle or broom head to come flying out into the audience. We also felt numerous ricochet water droplets from the sinks aggressively played at the stage’s edge. STOMP is a celebration of the human spirit, a winning blend of both ingenuity and passion. It may be chilly outside, but the talented team of STOMP is heating up the stage nightly at Broadway Playhouse Theater. 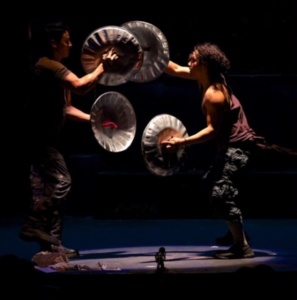 STOMP is now playing at the Broadway Playhouse Theater through December 30, 2018. 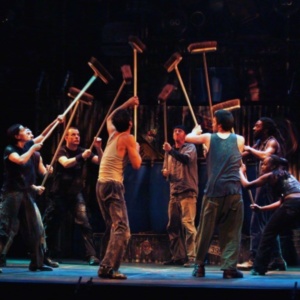