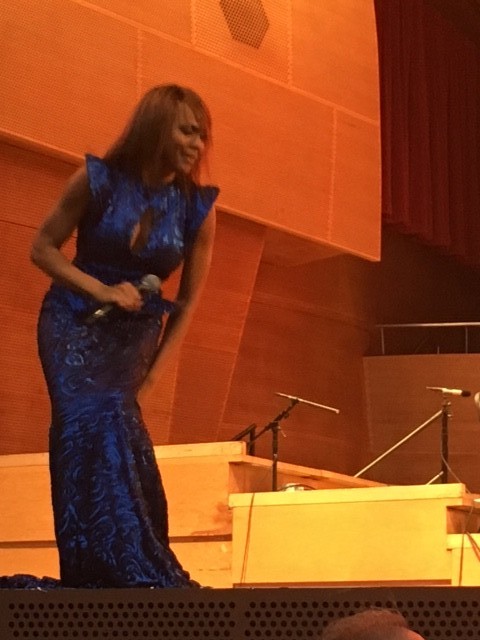 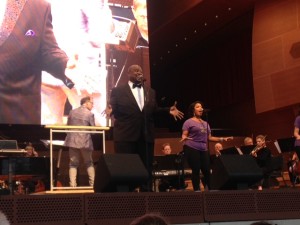 As the rain incessantly poured down, the music imperiously flowed out during Monday evening’s concert at Millennium Park’s Pritzker Pavilion. Broadway in Chicago in a partnership with the City of Chicago Department of Cultural Affairs and Special Events, sponsored their annual, one night only, 75 minute concert advertisement, featuring snippets and songs from 10 of their most promising upcoming musicals.  Designed to “whet” the ravenous appetites of thousands of Windy City musical theater fans, this year presentation was definitely more on the side of “wet.” Perhaps a frustrated Mother Nature was seeking vengeance as she couldn’t score front row Hamilton tickets! Speaking of Hamilton, their cast was conspicuously missing from the evening’s festivities, however wunderkind creator, Lin-Manuel Miranda, did appear via a brief video clip, expressing the troupe’s excitement to soon be playing the Windy City’s Private Bank Theatre. Hosted by ABC 7’s Emmy Award-winning talent, Janet Davies, a regular fixture at all of the touring Broadway in Chicago shows, this showcase began with a touching In Memoriam  tribute honoring theatrical titan, James “Jimmy” M. Nederlander, 1922-2016, a pillar in the foundation of the Broadway in Chicago theaters. After a exquisite rendition of “The National Anthem” by Park Ridge resident and Illinois High School Musical Theatre Award winner, Jack Cahill-Lemme, the show commenced. 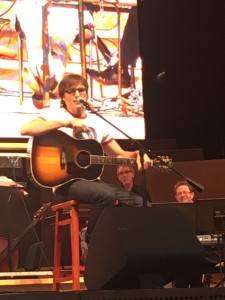 Up first, the exuberant and crowd pleasing ensemble from STOMP: The Musical. Representing the show, a team of eight diligent performers, Marivaldo Dos Santos, Eric Fay, Krystal Renee, Ivan Salazar, Cade Slattery, Reggie Talley, Simeon Weedall, and Penelope Wendtlandt. Working in curious syncopation with the far off thunder rumbling in the sky, each displayed the fierce fury of their signature vigorous choreography while playing percussive music on and with ordinary objects like trash can lids, warrior poles, and garbage cans as drums, in tight unison. Holiday 2016 will be ushered in at the Broadway Playhouse Theatre with the rat, tat, tat of their drumming. Continuing with the theme of family fare, the new Peter Pan tale, Finding Neverland was embodied by lovely soprano, Christine Dwyer. Mixing make-believe play with pure imagination, this is one for all ages. This Broadway.com Audience Choice Award winner hits Chicagoland just in time for Thanksgiving. Rounding out the opening set, Disney’s Aladdin, with sparkling tuxedo clad, Major Attaway, boasting the infectious “Never Had A Friend Like Me” with a bevy of back-up beauties in tow, including Kathryn Allison, Tia Altinay, Lauryn Ciardullo and Katie Terza. Described as “Pure Genie-us,” this magic carpet ride is set to launch with a late Spring 2017 opening. 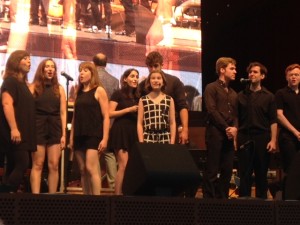 Decidedly more grown up in nature and tone, the groundbreaking, 2015 Tony Award Best Musical-winner, Fun Home, will play Chicago in early November 2016. Representing the character of Alison at three ages, Alessandra Baldacchino, Garrett Long and Lauren Pattem performed two songs, “Ring of Keys” and the finale “Flying Away” with the Chicago based Northwestern University Choir adding vocal assistance. Including Landree Fleming, Yando Lopez, Tiffany Tatreau, Shanna Jones, Dan Leahy, Jeff Meyer and Nick Day, these lovely renditions absolutely charmed. Speaking of Chicago based theatrical alumni, favorite son and Roosevelt University grad, Travis Taylor, lent his spectacular vocal chops to “The Music of the Night” from Broadway’s longest running musical, and soon to be holiday 2016 favorite, Cameron Mackintosh’s spectacular new production of Andrew Lloyd Webber’s The Phantom of the Opera. Rounding out this set of returning classics, The Lincoln Center Theater Production Rodger’s & Hammerstein’s The King and I directed by Bartlett Sher, the 2015 Tony Award-winner Best Revival of a Musical, had Daniella Dalli performing “Something Wonderful” from the show certain to be a summer 2017 indulgence. 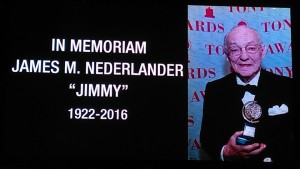 From Broadway classics to shows a bit more contemporary, Beautiful -The Carole King Story makes its Chicago return after a triumphant debut last winter. The luminous, Rebecca LaChance, returned to perform both “Will You Still Love Me Tomorrow” &  “I Feel The Earth Move,” which she turned into an instant audience sing-a-long. Make those lists to Santa quickly, Beautiful will just be here for December only this time around. The innovative transsexual rock star fantasy, Hedwig and the Angry Inch will light up the Oriental Theatre in March of 2017, but for tonight, original composer of both music and lyrics, Stephen Trask, strummed his guitar and serenaded a captivated crowd with “Midnight Radio.” As he sang the lyric, “Lift Up Your Hands,” the audience did so in unison. A four time Tony Award-winning musical, including 2014’s Best Revival of a Musical, Hedwig should play very well to a Windy City urban audience. Proving there is “Nothing’s As Amazing As A Musical,”  the men of Something Rotten will be bringing their outrageous antics within this Shakespearian farce next summer. Matt Doyle, James Ludwig and Aleksander Pevecs, proved it easy to entertain while singing “Hard to Be the Bard.” I caught this show when it first opened in New York, the lush costuming and outrageous, full-scale production numbers will thoroughly impress while out on the road. The reimagining of William Shakespeare as an egotistical, Justin Bieber-esque pop star is righteous and will tickle everyone’s funny bone. 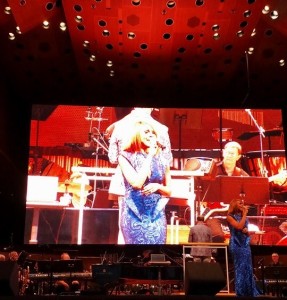 The final show vignette celebrated in song featured selections from the upcoming pre-Broadway national tour of The Bodyguard The Musical, based on the 1992 Whitney Houston and Kevin Costner film. This update will star Grammy nominee Deborah Cox who takes over the role of Rachel Marron. Current The Color Purple star Heather Headley played this role on London’s West End when it debuted in 2012. While Ms. Cox may not be a household name yet, she is a serious vocal livewire. In 2015, she re-recorded Whitney Houston’s vocals for the Lifetime Bio-pic movie directed by Angela Bassett. Cox was also pulling double duty while she stopping over in Chicago. Saturday evening found her the headlining performer at the Northalsted Market Days street festival and now, just two short days later, she is closing the Broadway in Chicago concert, as well.  Emerging on stage in a beaded, floor length royal blue gown, Cox delivered the perennial power ballad “I Will Always Love You” with command and grace. It is worth noting, the producers of The Bodyguard have secured the rights to Houston’s entire early songbook including additional hits “So Emotional,” “One Moment in Time,” “I’m Your Baby Tonight,” “All At Once,” “Saving All My Love For You,” and “I Have Nothing,” most of which didn’t appear at all on the original film’s soundtrack. Bringing the audience to their collective feet, the show wrapped with a spirited version of  “I Wanna Dance With Somebody.”  Cox herself will quickly grow accustomed to Chicago’s unpredictable weather.  The Bodyguard The Musical will play a mid-winter February, concluding its run just before Valentine’s Day. 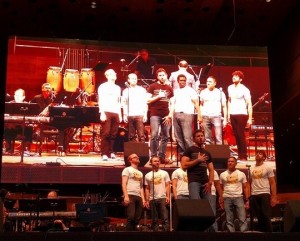 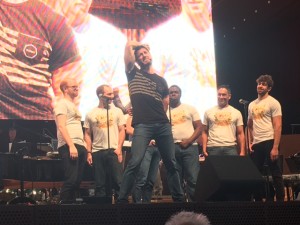 While not featured during the evening’s concert, coming soon to the stages of the Oriental Theatre, the Cadillac Palace Theatre, The PrivateBank Theatre, and the Broadway Playhouse Theatre; Kinky Boots, Cheers Live on Stage, Hamilton, Graeme of Thrones, Annie, A Charlie Brown Christmas and The Curious Incident of The Dog In The Night-Time. Hungry for all the cultural arts they could possibly consume on an August Chicago Monday evening, this near capacity crowd left both quenched and a little drenched. 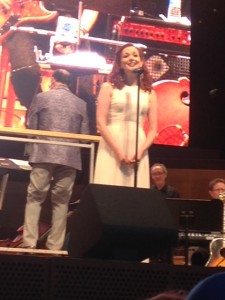 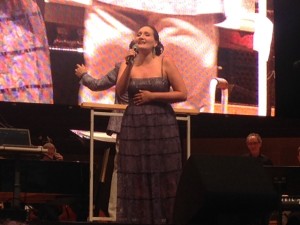 Daniella Dalli , King and I 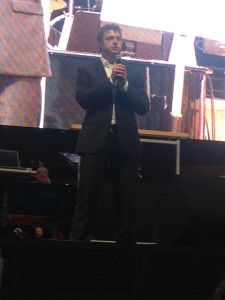 Travis Taylor, Phantom of the Opera 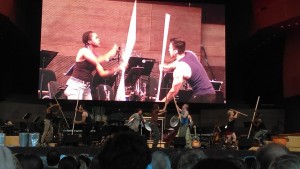