Broadway Kids Speak Out Against Bullying In I Have A Voice 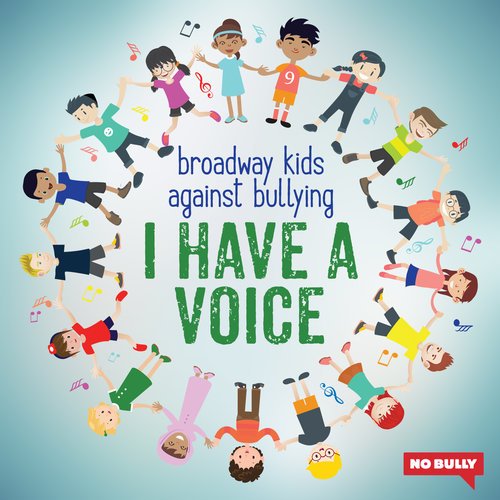 Broadway Kids Speak Out Against Bullying In I Have A Voice

Broadway Records President Van Dean, Executive Producer Gina Holland and No Bully Executive Producer Michelle Shapiro today launched the charitable recording, I Have A Voice (music by Frank Wildhorn, lyrics by Robin Lerner) with 100% of the profits to benefit www.NoBully.org. The song and videos, which premiered on People.com, feature over 75 Broadway kids from shows such as Matilda the Musical, School of Rock, Kinky Boots, Fiddler on the Roof, The Lion King, On Your Feet! and more.

“In the recording industry, I often work with children and have seen how saddened they are by the increased bullying and intolerance in schools across the country over the past year,” said Van Dean. “The ‘I Have a Voice’ initiative is an opportunity for 75+ child performers from Broadway and beyond to express their own voice and let other children know they too, have a voice. I truly hope this song will inspire others to be more inclusive, tolerant and unite kids to celebrate our differences.”

“I am so honored and grateful for my music to be used for this cause, which as a father, is so very important to me,” said award-winning composer Frank Wildhorn. “I believe music can heal and believe so strongly in its power to communicate. Being in the studio, watching and hearing these beautiful children sing Robin’s beautiful words was a truly inspiring moment, and one I’ll never forget.”

The digital download ofI Have A Voice is priced at $1.99 ($1.29 on iTunes) and is now available for purchase at BroadwayRecords.com.

The creative team for the 2016 benefit recording of I Have A Voice was led by Michael J. Moritz Jr and Jason Howland (music production; vocal, rhythmic and string arrangements; orchestra) and Jason Milstein (film production) and recorded at the DiMenna Center in New York City. Co-Executive Producers are Mia Moravis and Chris McCartie.

Van Dean, president of Broadway Records, has been working with the community of Sandy Hook/Newtown ever since the tragic shooting.  He co-conceived and produced From Broadway With Love: A Benefit Concert For Sandy Hook featuring 100 Broadway stars, a 40-piece orchestra and 300+ children from Newtown.  From Broadway With Love was a one night only concert that was later aired on PBS and was released on DVD, BluRay and CD with 100% of the profits going to the Newtown-Sandy Hook Community Foundation.  Since 2013, Van has been bringing visiting Broadway artists to Sandy Hook Elementary School and several other schools within Newtown to perform for the kids and mentor and inspire them to pursue their passions. He is also deeply involved with Newtown’s “New Arts” (http://www.newartsct.org) initiative.

Robin Lerner (Lyrics). Grammy nominated, Country Music Award winner, and critically-acclaimed lyricist Robin Lerner creates songs for film, theater and recording artists worldwide. A graduate of New York University’s Tisch School of the Arts Lerner began her career working as a screenwriter in Hollywood as well as a songwriter in many formats. Under the auspices of producers Steven Spielberg and Cameron Mackintosh, Lerner created animated musical features for Disney, Amblin’ and Warner Brothers, working with composers, Galt MacDermot, Frank Wildhorn, and George Stiles. As her songs found success in the pop world Lerner signed with Maverick Music and started traveling back and forth to Nashville. Over the past 15 years, Lerner’s songs have been recorded by great country artists such as Randy Travis (“Out Of My Bones #1), Tim McGraw (“She’s My Kind Of Rain” #1) and Faith Hill (“This Kiss #1) and multiplatinum artists worldwide including Chaka Khan, Patti LaBelle, Jermaine Jackson, Luther Vandross, The Backstreet Boys, Martina McBride, Linda Eder, Carly Simon, Take 6, Nick Lachey, Girls Generation, and Bette Midler. Lerner has written three musicals for the stage, An Officer and a Gentleman with composer Ken Hirsch which premiered in Sydney Australia in May of 2012, Tears of Heaven with composer Frank Wildhorn, which enjoyed its world premiere in Seoul in February 2011 and Excalibur, which premiered in St. Gallen Switzerland in 2014. She has also written the screenplay for ABC/Wonderful World of Disney’s “Princess of Thieves” (which aired in 2001) starring Keira Knightley and Malcom McDowell about the imaginary exploits of Robin Hood’s daughter.

Broadway Records  is one of the preeminent theatrical record labels to produce original cast albums for major Broadway and Off-Broadway shows including the Grammy® nominated Matilda The Musical, Grammy® nominated Fiddler on the Roof (2015 revival), Tony Award-winning and Grammy® nominated The Color Purple (2015 revival), Allegiance and Disaster! among others. Recent releases include The Visit, Doctor Zhivago, Side Show (2014 revival), Bonnie & Clyde, Big Fish and NBC’s television events, The Wiz Live! and Peter Pan Live!. The label’s critically-acclaimed “Live at Feinstein’s/54 BELOW” series features top Broadway stars including Patti LuPone, Aaron Tveit, Annaleigh Ashford, Norbert Leo Butz, Sierra Boggess, Laura Benanti, Emily Skinner & Alice Ripley, Frank Wildhorn and Friends, Micky Dolenz and many others.  Most recently, Broadway Records launched the Broadway for Orlando initiative (in partnership with creators Seth Rudetsky and James Wesley) as a response to the Pulse nightclub mass shooting. The all-star benefit single, “What the World Needs Now is Love” (recorded at NYC’s Avatar Studios on Wednesday, June 15, 2016) has been downloaded more than 65k times and raised over $100k to date and counting, with 100% of the proceeds benefitting the GLBT Center of Central Florida. Additionally, the song reached No. 1 on the iTunes song chart in its first week of release and broke into the Billboard Top 100 with no commercial radio play. A special charitable CD/DVD recording, From Broadway With Love: A Benefit Concert For Orlando, will be released in December. To learn more, visit www.BroadwayRecords.com.

NO BULLY® is a US based non-profit organization that trains schools how to activate student compassion to stop bullying and cyberbullying. The non-punitive No Bully System® has created bully-free campuses for over 100,000 students.  No Bully began in San Francisco in 2003 as a collaboration of educators, psychologists and lawyers committed to preventing the current generation of students from enduring the bullying that they experienced when they were in school. To learn more, visit, www.NoBully.org

Suzanna BowlingJune 22, 2022
Read More
Scroll for more
Tap
Soundproof Windows — One of the Best Gifts You Can Give Your Baby
Chazz Palminteri Ristorante Italiano Tell Them C Sent You