Get ready for Cher: The Musical. I can see this totally making money and the critics having a hey day, while the audience thrills to the songs they know and love. Actually this has been in the gossip mills when Cher first announced plans for a Broadway musical based on her life and music in June of 2012. At that time, she revealed that the show would feature three actresses playing herself during different stages of her life. She expressed interest in playing a fourth iteration of herself, as a wise figure who gives advice to her younger versions. By 2015, veteran musical-theater writer Rick Elice was enlisted. Elice co-penned Jersey Boys, Peter and The Star Catcher and The Addams Family, as well as worked as a creative director at Serino Coyne. He was also married to the fabulous Roger Rees, who died of brain cancer in July 2015. His co-writer on Jersey Boys, Marshall Brickman is his collaborator.

On Thursday, Elice will present the first draft of his script to the show’s producers Hamilton’s Jeffrey Seller and Flody Suarez, TV producer on “The Blacklist” and well as several others. It was Suarez who talked Cher into the idea. Cher sees the script May 20, on her 70th birthday.

The show chronicles Cher’s life as a child, wife of Sonny Bono and the women who won our hearts in “Mask” and “Moonstruck.” 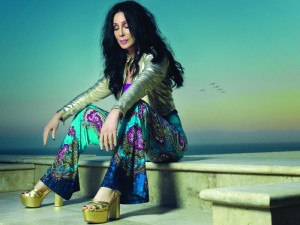 Born Cherilyn Sarkisian LaPiere near Los Angeles, her mother a struggling actress, aka waitress moved around, a lot. At one point she ended up in an orphanage. Cher always knew she wanted to be famous. In 10972 she was working as a backup singer in LA, when she met Sonny Bono, also a struggling singer. With the promoting skills of Sonny and the hit of “The Beat Goes On,” they made it to the “The Sonny & Cher Comedy Hour.” After a bitter 1975 divorce, Cher reinvented herself, as a solo singer with such hits as “Gypsies, Tramps and Thieves,” “Take Me Home,” “Believe,” “If I Could Turn Back Time” and “Walking in Memphis.” As an actress Cher appeared on Broadway in 1982’s in Robert Altman’s “Come Back to the 5 and Dime, Jimmy Dean, Jimmy Dean.” Mike Nichols saw her and cast her in “Silkwood.”

“Cher: The Musical” is only the working title.

In the 70’s Cher performed all the roles in West Side Story for “The Sonny & Cher Comedy Hour.” We leave you with that memory.