Broadway Mourns a Master Playwright As Neil Simon Passes Away

Broadway Mourns a Master Playwright As Neil Simon Passes Away

Neil Simon, America’s most successful and prolific playwright in the second half of the 20th century, has passed away at a Manhattan hospital. Suffering from complications due to pneumonia and renal failure, Simon was 91.

Born on July 4, 1927 in the Bronx neighborhood of Manhattan to Jewish parents. Simon’s  childhood was difficult and mostly unhappy due to his parents’ “tempestuous marriage” and financial hardship caused by the Depression, so he sought out humor. His father often abandoned the family and had multiple affairs. As a result, Simon and his brother Danny were sometimes forced to live with different relatives, or else their parents took in boarders for some income. This was later reflected in his plays He and his brother Danny wrote radio and television scripts including the radio series The Robert Q. Lewis Show, which led to other writing jobs. Max Liebman hired the duo for his popular television comedy series Your Show of Shows, for which he earned two Emmy Award nominations. He later wrote scripts for The Phil Silvers Show; the episodes were broadcast during 1958 and 1959. Simon incorporated some of their experiences into his play Laughter on the 23rd Floor (1993). 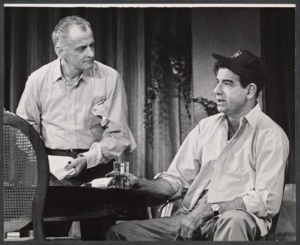 Art Carney and Walter Matthau in the original Broadway run, as Felix and Oscar

The first Broadway  Simon wrote was Catch a Star! (1955), collaborating on sketches with his brother, Danny. He began writing his own plays beginning with Come Blow Your Horn (1961), which  ran for 678 performances on Broadway. It was followed by two more successful plays, Barefoot in the Park (1963) and The Odd Couple (1965), for which he won a Tony Award. The Odd Couple, was adapted into a film in 1967, but became a popular sitcom on ABC from 1970-1975, was adapted for another ABC show in 1982 and a CBS show in 2015.

Next came  The Good Doctor, God’s Favorite, Chapter Two, They’re Playing Our Song, I Ought to Be in Pictures, Brighton Beach Memoirs, Biloxi Blues, Broadway Bound, Jake’s Women, and The Goodbye Girl . Simon dominated Broadway releasing a new play almost every year from 1961 to 1993. He slowed down in the later half of the 1990s, though his plays were playing all over the country. Simon also created the scripts for five hit musicals, screenplays, 27 of them that included film adaptations of his own stage productions and two volumes of memoirs. In 1966 Sweet Charity, The Star-Spangled Girl, The Odd Couple and Barefoot in the Park were all playing on Broadway at the same time. During mid-1980s – Simon also had four shows on Broadway running at the same time. This had only ever done in the 1920s.

His 1991 play Lost In Yonkers, won Simon the Pulitzer Prize for drama and was the only play that year to be nominated by all five jury members, who called it ‘a mature work by an enduring (and often undervalued) American playwright’.

Simon won four Tonys, one for special achievement and the Mark Twain prize for humor. Simon has received more combined Oscar and Tony nominations than any other writer.

In 2004, Simon received a kidney transplant from his long-time friend and publicist Bill Evans. He died on August 26, 2018, after being on life-support while hospitalized for renal failure. Simon also had Alzheimer’s disease.

Simon’s body of work will stay with us forever, especially his theatre work which set the bar. You will be missed and certainly were beloved.

Suzanna BowlingMay 18, 2022
Read More
Scroll for more
Tap
The Kids from Parkland Enjoyed a Performance of Desperate Measures and Get A Chance to Laugh
Snap, Crackle and Pop and The Band Still Can’t Get It Together