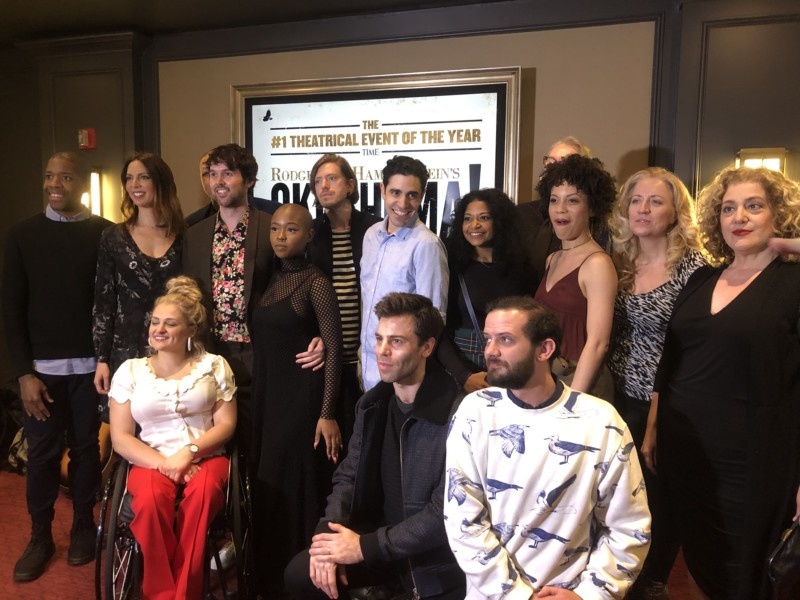 Adam Pascal will play Edward Lewis from Tuesday, February 19, through Friday, February 22, 2019, during Andy Karl’s time off in Pretty Woman: The musical.

The Broadway production of Rodgers and Hammerstein’s Oklahoma!, directed by Daniel Fishwill star the St. Ann’s original cast members including (in alphabetical order): Anthony Cason as Cord Elam, Damon Daunno as Curly McLain, James Davis as Will Parker, Gabrielle Hamilton as Lead Dancer, Rebecca Naomi Jones as Laurey Williams, Will Mann as Mike, Mallory Portnoy as Gertie Cummings, Ali Stroker as Ado Annie, Mitch Tebo as Andrew Carnes, two-time Tony Award-nominee Mary Testa as Aunt Eller and Patrick Vaill as Jud Fry.  Joining the cast for the Broadway run is star of screen and stage Will Brill (“The Marvelous Mrs. Maisel”, You Can’t Take It With You) as Ali Hakim. The cast meet the press at Bob’s Steak and Chop House and here is a preview of some of the interviews.

After an acclaimed run in London’s West End, the Sheen Center for Thought & Culture will present the American premiere production of Stephen Unwin’s new play, All Our Children. Tony Award® winner John Glover (Saint Joan, The Drowsy Chaperone, Love! Valour!Compassion! on Broadway; TV’s “Smallville”) is featured in a company including Jennifer Dundas (The Little Foxes, Arcadia on Broadway), Karl Kenzler (Fiddler on the Roof, You Can’t Take It With You on Broadway; “Law & Order,” “House of Cards”), Tasha Lawrence (“The Looming Tower,” Hulu; “Royal Pains”) and Sam Lilja (The Iceman Cometh on Broadway). Directed by Ethan McSweeny (Gore Vidal’s The Best Man, A Time to Kill on Broadway), All Our Children plays a limited five-week engagement, April 6 through May 12 at The Sheen Center (18 Bleecker Street at the corner of Elizabeth Street, NYC) in the Black Box Theater.  The official opening is Sunday, April 14 at 3PM. Performances are Tuesday through Thursday at 7PM, Friday and Saturday evenings at 8PM, with matinees on Saturday at 2PM and Sundays at 3PM. Tickets are $50 during previews (through April13) and $65 and $80 for performances thereafter. Tickets are available online atSheenCenter.org, by phone at 212-925-2812, or in-person at The Sheen Center box office Monday to Friday Noon to 5PM and one hour before performances. Student rush tickets are available one hour before curtain.

The Tony Awards and Carnegie Mellon University (CMU) today announced a group of talented actors serving as Ambassadors for the 2019 Excellence in Theatre Education Award.

CMU alumna Chanté Adams, who notably was a high school drama student of 2016 Excellence in Theatre Education Award Winner, Marilyn ‘MC’ McCormick of Detroit, this year returns as an Ambassador. (Adams appeared in the August Wilson play, “Ma Rainey’s Black Bottom” and currently stars in the Netflix movie, “Roxanne, Roxanne,” and the feature film, “Monsters and Men.”) Adams will also serve as CMU’s alumni representative on this year’s award-selection committee.  For a message from Chanté, click here.

Other Ambassadors for the 2019 Excellence in Theatre Education Award program include Ali Stroker (upcoming Broadway revival of “Oklahoma,” “Spring Awakening,” and “The Glee Project”)and Santino Fontana (“Tootsie” on Broadway and Disney’s animated feature, “Frozen”); both Stroker and Fontana are longtime advocates of theatre and arts education.

Additional CMU Ambassadors for 2019 include alumni Casey Cott (from the CW’s hit series, “Riverdale,” and feature film, “All the Little Things We Kill”) and Rory O’Malley (Tony nominee for “The Book of Mormon,” host of Geffen Playhouse Unscripted podcast, and star of “Hamilton” and Lifetime’s upcoming series, “American Princess.”)

Ambassadors for the Excellence in Theatre Education program are calling on students, parents, faculty, staff, friends and families across the U.S. to submit local, notable drama teachers—those who inspire their kids and their communities with exceptional theatre programs.

Now through February 22, submissions will be accepted online for K-12 theatre educators at an accredited institution or recognized community theatre organization. Anyone can submit a worthy teacher for consideration. He or she must be a teacher whose position is dedicated to and/or includes aspects of theatre education. Submissions can be made at www.TonyAwards.com/EducationAward.

Since 2014, the Excellence in Theatre Education Award has been bestowed annually at the Tony Awards. Last year’s honor was presented to Melody Herzfeld of Parkland, Florida, where she is a drama teacher at Marjory Stoneman Douglas High School.

“We’re thrilled to have such talented performers stand with us as Ambassadors to promote the importance of theatre education,” said Heather Hitchens, President of the American Theatre Wing and Charlotte St. Martin, President of The Broadway League. “We shine this annual spotlight on teachers to recognize them and to thank them for the essential work they do year-round.”

“CMU is grateful to our College of Fine Arts alumni, this year and in years past, who have served as Ambassadors for the Excellence in Theatre Education Award,” said Carnegie Mellon University President Farnam Jahanian. “We’re further encouraged by the expanded participation and support of the Broadway community, even beyond our immediate CMU family. Now in its fifth year, this program has truly become a national celebration of the theatre education profession.”

A panel of judges comprised of the American Theatre Wing, The Broadway League, Carnegie Mellon University and other leaders from the theatre industry will select the winner. The winner will receive a cash grant for his or her school, flights to New York City, hotel accommodations and a pair of tickets to the 2019 Tony Awards Ceremony and Gala.

In addition, the winning teacher’s theatre arts students will receive a master class presentation from Carnegie Mellon’s School of Drama, as well as two scholarships for students of their choosing to attend the School of Drama Summer Pre-College Program in summer 2020. Carnegie Mellon’s School of Drama is the oldest drama degree-granting program in the United States. In the past century, CMU has produced hundreds of Tony nominees, and its alumni have won 47 Tony Awards to date.

The 2019 Tony Awards, presented by The Broadway League and the American Theatre Wing, will air live on CBS on Sunday, June 9, 2019. For more information on the Tony Awards, visit TonyAwards.com and Facebook.com/TheTonyAwards, and follow @TheTonyAwards on Instagram, Twitter and Snapchat.