Broadway On Demand To Stream the 2022 Drama Desk Awards Free 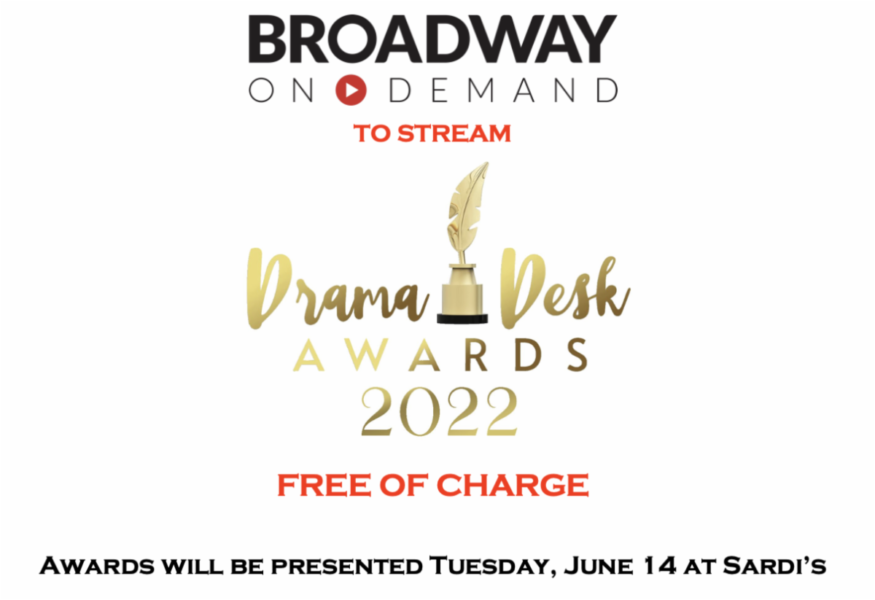 Broadway On Demand To Stream the 2022 Drama Desk Awards Free

Suzanna Bowling
Broadway On Demand will stream the 2022 Drama Desk Awards free of charge.
Viewers will be able to stream the Awards live by creating a FREE login (email/password). Once they do, they’ll be redirected back to the viewing page. A login can be created here.
This year’s Drama Desk Awards will take place at Sardi’s (234 W 44th Street) on June 14th from 3:00 – 6:00pm. The full list of winners is available at the website www.DramaDeskAwards.com.
Viewers can begin logging into Broadway On Demand at 2:45pm on June 14th.
It was previously announced that Renée Elise Goldsberry (Hamilton; The Color Purple; Girl5eva) will host the 66th Annual Drama Desk Awards along with presenters Charles Busch, Kerry Butler, Liz Callaway, Lileana Blain-Cruz, Max von Essen, Santino Fontana, Jessica Hecht, Brittany Johnson, Leslie Kritzer, Derek McLane, Heidi Schreck, Talia Suskauer, and Sanaz Toossi.
There will also be performances by the 2020 Drama Desk Award winner for Outstanding Revival – Little Shop of Horrors, The cast of Harmony, and The Broadway Boys.
In keeping with the Drama Desk’s mission, the nominators considered shows that opened on Broadway, Off-Broadway, and Off-Off Broadway between July 2, 2021 and May 1, 2022 for this year’s Awards. Only live performances were eligible – if performances were also available for streaming, 21 or more unique live performances were required.
The Drama Desk Awards are produced by Tony Award winner Scott Mauro/Scott Mauro Entertainment and the show is being written by six-time Emmy Award winner Bruce Vilanch.
Limited tickets to the ceremony are available at: www.DramaDeskAwards.com
Related ItemsBroadwayCharles BuschDerek McLaneDrama Desk AwardsHEIDI SCHRECKJessica HechtKerry ButlerLeslie Kritzerlileana blain-cruzLiz CallawayMax Von EssenNewOff BroadwayRenée Elise GoldsberrySantino Fontana
Broadway