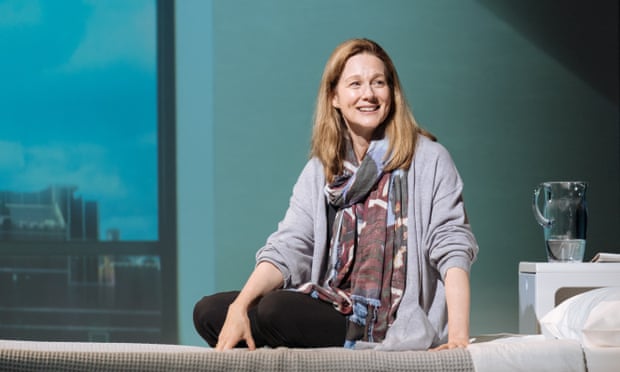 The new Broadway revival of West Side Story, directed by Tony winner Ivo van Hove, will officially open at the Broadway Theatre February 20th. The production, which began previews December 10th, was scheduled to open February 6th. This is not the West Side Story you will be expecting. The choreography is by the avant-garde formalist Anne Teresa De Keersmaeker. Set in the present day, some gang members carry iPhones. There’s more, but I’ll let you discover that on your own.

2020 starts off with a bang with Laura Linney and My Name is Lucy Barton. Lucy wakes after an operation to find—much to her surprise—her mother at the foot of her bed. They haven’t seen each other in years. During their days-long visit, Lucy tries to understand her past, works to come to terms with her family, and begins to find herself as a writer. The show opens at the Samuel J. Friedman first preview: January 4th, opening night: January 15th.

Transferring from the Public Theatre Girl From The North Country tells of a guesthouse in 1934, in the heartland of America, a group of travelers pass in and out of each other’s lives, and share stories that awaken each other with passion, fury and, beauty. Written by Conor McPherson and set to the music and the lyrics of Bob Dylan, Tony nominees Marc Kudisch, David Pittu, and Mare Winningham star along with Todd Almond, Jeannette Bayardelle, Matthew Frederick Harris, Caitlin Houlahan, Robert Joy, Luba Mason, Ben Mayne, Tom Nelis, Colton Ryan, John Schiappa, Austin Scott, Kimber Elayne Sprawl, Rachel Stern, and Chelsea Lee Williams. First Preview at the Belasco starts February 7th with an opening night set for March 5th.

The Olivier Award-winning Royal Court Theatre production of Martin McDonagh’s Hangman transferred to the West End prior to making its U.S. debut, enjoyed a sold-out run Off-Broadway at Atlantic Theater Company in 2018. Reprising their roles from the West End are Mark Addy as Harry, Owen Campbell as Clegg, Gaby French as Shirley, Richard Hollis as Bill, and John Horton as Arthur. New to the production are Tracie Bennett as Alice, Ewen Bremner as Syd, John Hodgkinson as Pierrepoint, and Dan Stevens as Mooney. When local British hangman Harry finds himself without a job on the day that hanging has been abolished. In the wake of this historic decision, a string of events lead to both comic and tragic consequences. First preview begins February 28th at the Golden theatre with a March 19th opening.

The revival of Stephen Sondheim Company comes to the Bernad B. Jacobs with their first preview March 2nd and an opening night of March 22nd. Directed by Marianne Elliott and starring Katrina Lenk as Bobbie, alongside Patti LuPone, reprising her Olivier Award-winning performance as Joanne. Joining are Matt Doyle as Jamie, Christopher Fitzgerald as David, Christopher Sieber as Harry, Jennifer Simard as Sarah, Terence Archie as Larry, Etai Benson as Paul, Nikki Renée Daniels as Jenny, Claybourne Elder as Andy, Greg Hildreth as Peter, Kyle Dean Massey as Theo, and Bobby Conte Thornton as P.J.

The Nederlander Theatre brings The Lehman Trilogy to Broadway. This 163-year saga that begins with a young man in Bavaria dreaming of a new life and ends with one of the world’s largest financial crises. Directed by Sam Mendes and starring Adam Godley, Ben Miles, and Simon Russell Beale, who play the three title brothers, their sons, and grandson. First preview starts March 7th with an opening night set for March 26th.

Mrs. Doubtfire comes to the Stephen Sondheim Theatre begining March 9th with a red carpet opening April 5th. Directed by Jerry Zaks, starring Rob McClure  as the struggling actor who disguises himself as a nanny in order to spend more time with his children. Look for Jenn Gambatese and Brad Oscar to lighten this movie turned musical.

The most interesting fare is Tom Kitt, Michael Korie and James Lapine’s Flying Over Sunset. Carmen Cusack stars as playwright and diplomat Clare Booth Luce, Harry Hadden-Paton as writer Aldous Huxley, and Tony Yazbek as movie star Cary Grant. Follow three artists during the ’50s as they experiment with the drug LSD. At a crossroads in their lives the three come together, and under the influence of the drug, take a trip and confront the mysteries of their lives and their world. Performances begin March 12th with an opening April 16th.

Sharon D. Clarke makes her Broadway debut in the transfer of her Olivier Award-winning performance as Caroline, an African-American maid whose world of ’60s Louisiana changes in ways big and small in Caroline or Change. Written by Tony Kushner and Jeanine Tesori. First previews begin March 13th at Studio 54 with an opening night set for April 7th

Matthew Broderick and Sarah Jessica Parker star in the revival of the classic Neil Simon show Plaza Suite. John Benjamin Hickey directs this comedy that reunites the real-life couple on Broadway for the first time in over 20 years. First previews begin March 13th with an opening night set for April 13th at the Hudson Theater.

Mary-Louise Parker and David Morse reprise their roles more than 20 years later after the 1997 Off-Broadway debut of the Pulitzer-prize winning play How I Learned To Drive. Li’l Bit (Parker) as she looks back in time in order to make sense of an uncle (Morse) who impacted her past, present, and future. Written by Paula Vogel and directed by Mark Brokaw at the Samuel J. Friedman Ttheatre. First preview March 27th with an opening April 22nd.

Tony winner Laurence Fishburne and Oscar winner Sam Rockwell star in the David Mamet’s American Buffalo. This play tells of a junk shop owner as he schemes to get back a valuable nickel sold for much less than it’s worth. Emmy winner Darren Criss co-stars. Neil Pepe directs at the Circle in the Square. First preview March 24th with an April 14th opening.

The New York premiere of Noah Haidle’s play Birthday Candles. Debra Messing is a woman striving for significance in her life at the American Airlines Theatre. First preview April 2nd with an April 21st opening.