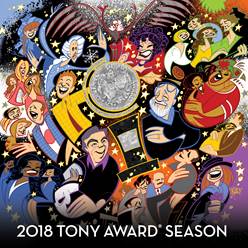 Tony Award Productions and Broadway Records have announced the second annual Tony Award® Season compilation album to be released on CD and digitally at most major music retailers including Barnes & Noble and iTunes on June 8, 2018.  The CD is now available for pre-order at www.BroadwayRecords.com, www.TonyAwards.com and Amazon.com.

Each musical from the 2017-2018 season, including the 2018 Tony nominated musicals, have been invited to contribute a song to this new compilation album. There will also be bonus tracks to represent this year’s Tony lifetime achievement honorees, Chita Rivera and Andrew Lloyd Webber.  A portion of the proceeds from the album will go to the American Theatre Wing and Broadway League’s arts educations initiatives.

2. Mama Will Provide (from Once On This Island)

3. (Just a) Simple Sponge (from SpongeBob SquarePants: The Musical)

4. I Could Have Danced All Night (from My Fair Lady)

6. The Beat of Your Heart (from The Band’s Visit)

9. She Works Hard for the Money (from Summer: The Donna Summer Musical)

10. Do the Work (from Prince of Broadway)

12. Bonus Track: The Music of the Night (from The Phantom of the Opera – for the 30th anniversary)

13. Bonus Track: Stick It to the Man (from School of Rock — Andrew Lloyd Webber Lifetime Achievement)

“We are thrilled to continue our collaboration with the Tony Awards in this second edition.  We believe the compilation album is the perfect way for the fans to experience a taste of all of the incredible new musicals and revivals Broadway has unveiled this season,” said Van Dean, President of Broadway Records.

“It is so exciting to be able to bring together the music that celebrates an incredible season on Broadway!,” said Charlotte St. Martin, President The Broadway League and Heather Hitchens, President the American Theatre Wing. “And to be able to share that celebration with theatre fans everywhere is really something special.”

As with last year, the cover art features a specially commissioned Tony season illustration by Justin “Squigs” Robertson. The packaging will include an essay by noted musical theatre historian Jennifer Ashley Tepper, as well as details about each show.

The American Theatre Wing’s 72nd Annual Tony Awards, hosted by Sara Bareilles and Josh Groban, will air live from Radio City Music Hall on the CBS Television Network on Sunday, June 10, 2017 (8:00-11:00 PM, ET/delayed PT). The Tony Awards, which honors theatre professionals for distinguished achievement on Broadway, has been broadcast on CBS since 1978. The Tony Awards are presented by The Broadway League and the American Theatre Wing.

For more information on the Tony Awards, visit TonyAwards.com and Facebook.com/TheTonyAwards and follow @TheTonyAwards on Instagram, Twitter and Snapchat. Join the conversation using the hashtags #TonyAwards2018 and #TheatreInspires.