Broadway Records Will Release Nick Cordero’s Live Your Life: Live at Feinstein’s/54 Below, To Benefit Amanda Kloots And Elvis 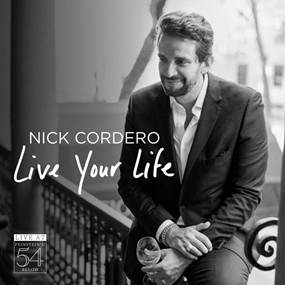 Broadway Records Will Release Nick Cordero’s Live Your Life: Live at Feinstein’s/54 Below, To Benefit Amanda Kloots And Elvis

Broadway Records announced today the release of Live Your Life: Live at Feinstein’s/54 Below, the recording of Nick Cordero’s cabaret performance, directed and music directed by Emmy Award-winning Producer and Music Director, Michael J Moritz Jr. Prior to being diagnosed with coronavirus, Cordero and Moritz had been planning to release the recording of his celebrated cabaret act from 2019, but his plans were put on hold. Following his passing, the album will be released with his family’s blessing to honor his legacy and celebrate the incredible talent and life that was tragically cut short. Proceeds from the album will go to benefit his wife, Amanda Kloots, and their young son Elvis. The album will be available from all major music retailers on Thursday, September 17th, 2020, to commemorate what would have been Nick’s 42ndbirthday.

Nick Cordero received a Tony Award nomination for his role of Cheech in Bullets Over Broadway. A beloved figure in the Broadway community, he also originated roles in A Bronx Tale and Waitress. Cordero passed away on July 5th at the age of 41, following a long battle with coronavirus. For the duration of his illness, fans and friends united over social media to support Cordero and Kloots by singing Cordero’s original song “Live Your Life”, which is featured on the album. Those wishing to support the family directly can also donate to a GoFundMe page set up to benefit them.

“I’ve never seen my husband work so hard on a show and boy was he nervous,” said Amanda Kloots, Nick Cordero’s wife. “It was the first one-man show he had created and he wanted to give the audience something to remember. Nick created a night of music and story telling that was extremely personal too. It is a mix of Broadway, Rock ‘n’ Roll, standards and original music and, if you knew Nick, it was perfect!”

“Last year, Nick approached me about putting together a live cabaret show for him as a way to share his stories, and to help provide for his then growing family,” said Michael J Moritz Jr., Cordero’s Emmy Award-winning musical director and album producer.  “Nick and I had so much fun putting this show together. Until now, only 250 people heard this show live. While nothing will fill the loss that Nick leaves in the world, I’m so thankful we recorded the concert. I’m incredibly honored to help preserve Nick’s memory for those who love him, and to share his extraordinary talent and warmth with the world

“Like so many in our industry and across the country, we had been closely following Nick’s valiant fight against coronavirus and kept his family in our prayers,” said Van Dean, President and Founder of Broadway Records. “Amanda Kloots’ strength and honesty in documenting the impact coronavirus had on her family is inspiring. We’ve worked closely with Amanda and Michael to share Nick’s music and his memory with fans and supporters, and we are determined to share the show Nick and Michael created and to help his family.”