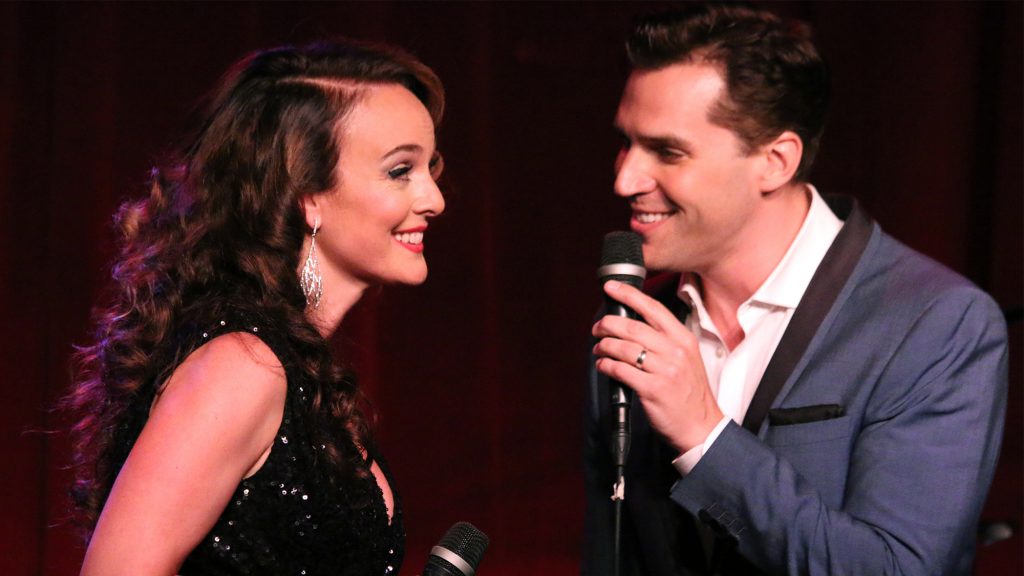 Cabaret is a very personal musical art form. Broadway performers normally tied to the stories of the musicals in which they appear come to us in cabaret rooms as themselves, and share their personal passions with their audience. If you’re a fan of that performer, it s a rare and exciting opportunity to be made a part of their lives for just a moment. So it was a thrill to experience the beautiful voices and celebratory intimacy of musical theater stars Melissa Errico and Ryan Silverman as they set sparks flying Tuesday night in Broadway Romance, a beautiful evening of songs about love Broadway style, which just concluded its brief run at Feinstein’s/ 54 Below, under the always brilliant musical direction of Austin Cook.

As Ms. Errico astutely pointed out, “When it’s really hot outside, the best place to go is a basement.”But even the subterranean setting, and all the  air conditioning, couldn’t keep this dynamic vocal duo from heating up the room.

Mr. Silverman and Ms. Errico have performed as a couple in love in both Finian’s Rainbow at the Irish Repertory and in Sondheim’s Passion at the Classic Stage.  So they are well practiced in making love to one another on stage.  They share an easy and engaging chemistry with each other.   However, they are also quick to remind us that it’s only make believe.  That’s something  I’m sure Ms. Errico’s tennis player husband, Patrick McEnroe, who  is on tour with the U.S. open, and Mr. Silverman’s wife, Kim, who was sitting in the audience, must be happy to know.   At one point, Ms. Errico even deferred to Mrs. Silverman to get permission to sit on Mr. Silverman’s lap.   But what the heck.  It’s all in the  theatrical family!

Ms. Errico is a mellifluous soprano with a fast trill and a lightness in her voice appropriate to her long history of being cast, in her words, as a  “terminal ingénue.” But at fortysomething, she has no worries. She is at her beautiful prime. She glows both with a still  youthful beauty, and also  with the ripeness of a  mother of three who can still turn a head.  She is a strong, sexy, and delicious musical theater force of nature. See her now through September 6th in On a Clear Day You Can See Forever at the Irish Rep.

Mr. Silverman is a boyishly handsome and charming leading man, who last wowed Broadway audiences in the revivial of Side Show. He is an exciting baritenor with both soaring high notes and deeper, warmer tones.

The evening opened with a trio of Irish themed songs from Finian’s Rainbow written, as Ms. Errico pointed out, by “two left wing Jewish intellectuals,” Burton Lane and Yip Harburg. In How Are Things in Glocca Morra, Look to the Rainbow, and Old Devil Moon, they recreated the onstage romance which they played at the Irish Rep. Although the male lead in that show was written for a baritone, Mr. SiIverman sang higher harmonies with Ms. Errico, more in keeping with his tenor side.

But Mr. Silverman also reached deep into his baritone self to deliver powerful and sexy renditions of So In Love from Kiss Me Kate in duet with Ms. Errico, and an absolutely bring-down-the-house version of They Call the Wind Maria from Paint Your Wagon by Lerner and Lowe.

One of the fun parts of cabaret is its casual setting. So Ms. Errico only endeared herself to us when she shuffled the verses to How Are Things in GLocomorra, and  back tracked to get them right. But later in the show, Mr. Silverman tried to cover less obviously, when he stumbled in more than one place on the lyrics to Billy Bigelow’s Soliloquy from Carousel. I guess I was the only one in the room who knew the song well enough to get a guffaw out of his conflagration of the lyrics, when  instead of  “Haul a scow around a canal, run a cow around a corral” he sang  “haul a cow around a canal”! Either way, it was sung beautifully. But I’ll still take Joshua Henry’s current Broadway interpretation of the song for its depth.

Ms. Errico displayed her sexiest side to sing a big belt version of Harold Arlen and Johnny Mercer’s torch classic, Come Rain or Come Shine. She then segued into the role of Aphrodite, the Goddess of Love herself, to sing That’s Him by Kurt Weill and Ogden Nash from One Touch of Venus. Following that, she stretched flat out on her back on the piano, looking fabulous…and nearly had a wardrobe malfunction. But she came back with a great ad lib, admitting, “I just tried it upside down for the first time! I mean, singing….sorry, Mom!”  The next love song, Speak Low, also by Kurt Weill, was given a particularly ethereal setting by Mr. Cook.

A highlight of the evening for me was their recreation of songs and moments from Passion by Mr. Sondheim, including a duet version of Loving You.

The lightness and speed of Ms. Errico’s vibrato doesn’t always lend itself to songs more darkly dramatic than musically gorgeous. So her rendition of Another Winter in a Summer Town from Grey Gardens, as expertly delivered as it was, seemed to lack the vocal gravitas to match the material. That was followed by Mr. Silverman’s fine handling of the conflicted love song, How to Handle a Woman from Camelot.

Even though it was billed as a Broadway evening, they included a couple interesting songs from the pop world. One was Peoples Parties/Real Emotion by Joni Mitchell and Randi Newman. The other was Secret O’ Life by James Taylor. After that, they went back to conclude the regular evening with Surrey With the Fringe on Top from the granddaddy modern musical of them all, Rogers and Hammerstein’s Oklahoma. They encored with Windmills of Your Mind by Michel Legrand and the Bergmans.

Mr. Cook’s expressive accompaniment was a real triumph in his 54 Below debut. Mr. Cook had previously made a huge impact as a Chicago musical theater director and accompanist before coming to NYC with last season’s War Paint.  He’s also a fine singing actor.  So it raised the evening to a whole other level, watching him fully inhabit the songs he played.  His passionate playing was as dramatic and illustrative as watching Leonard Bernstein conduct, which is high praise indeed. Look for him around town in the future.

Ms. Errico will be back in November to debut a new album of songs by Mr. Sondheim, and I hope to be there to hear it.  Mr. Silverman, a Canadian, offered to rent a bus at one point in the show and take us all to Canada for a couple of years. As long as he sings to us along the way, I’m in.