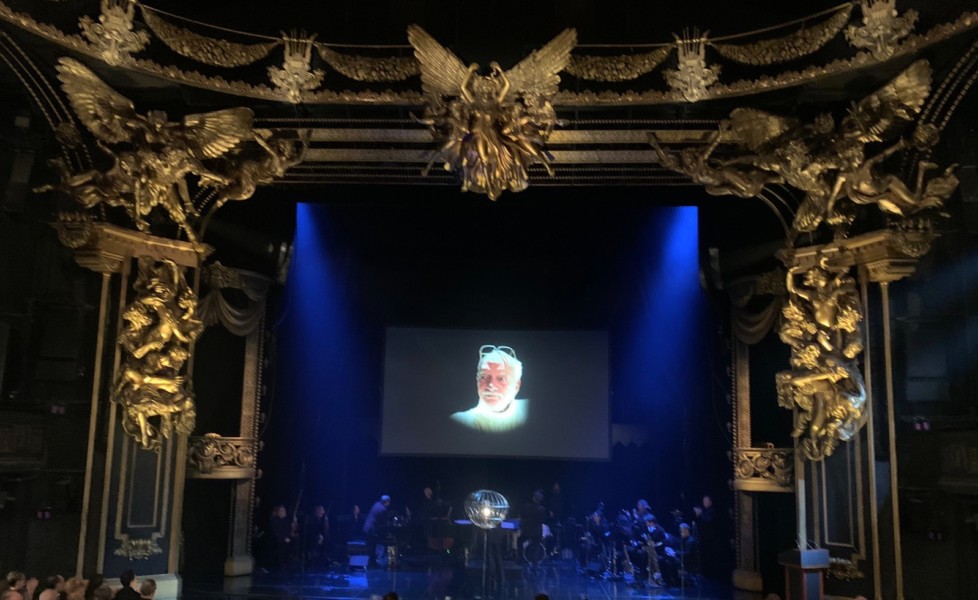 The Majestic Theatre for Hal Prince’s Memorial was so apropos. Phantom of the Opera, has been playing here for over 31 years. A Little Night Music, Fiddler and Forum played here, as well as this is where Hal Prince met Stephen Sondheim for the first time. They both were at the opening night of South Pacific, 70 years ago.

Stories, songs, music, film clips from Lonny Price’s wonderful documentary “Hal Prince: The Director’s Life!” and a Broadway family who poured out their love, as Jason Robert Brown conducted the Overture from The Prince Of Broadway.

Joel Grey opened the memorial, singing from Wilkommen from Cabaret.

Stephen Sondheim talked about being best man at Hal’s wedding.

Jay Armstrong Johnson and Meghan Picerno sang “All I Ask of You”.

A video of Ethel Shutta, singing “Broadway Baby” led to Hal Prince talking about Follies and how he related to the character of Ben, as Michael Cerveris performed “The Road You Didn’t Take.”

Carol Burnett spoke about how Hal was the brother she never had, and how he helped her after her daughter died.

Thomas Kail told of a meeting with Hal, when he was young. Trying to play it cool, he promised himself he wouldn’t blurt out some obscure Prince anecdote. After 15 minutes he gushed on over a favorite Hal quote and Hal said, ‘Days like today make me feel like I’m going to live forever, and opening nights remind me I’m going to die.’

Jason Robert Brown told of how Hal would bring people into his family, looking for the artists he believed in long term.

Laura Linney shared a memory of growing up with Daisy. On one Prince family vacation she spied on Daisy and Hal having a father-daughter chat and learned the meaning of great parenting.

Tony Yazbek started “This Is Not Over Yet” from Parade, to have Carolee Carmello on her day off from the Hello Dolly tour join in.

Andrew Lloyd Webber told of how he and Prince started working together. Hal reached out to him with encouraging words and that led to working on both Evita and Phantom.

Sierra Boggess sang “Will He Like Me?” from She Loves Me.

Bryonha Marie Parhan sang Cabaret and brought down the house.

Joel Grey returned to sing the “Wilkommen” reprise, as a final cymbal crashed, they all turned upsage to salute a final photo of Prince.

Hal’s daughter Daisy directed this show with Susan Stroman, to a ten minute standing ovation where the audience didn’t want to leave.

Bernadette Peters, Teri Ralston, Loni Ackerman and Marc Shaiman were in the audience.

Prince produced 33 Broadway shows and directed 20. With 21 Tony Awards and a vision for Broadway he will be well missed.