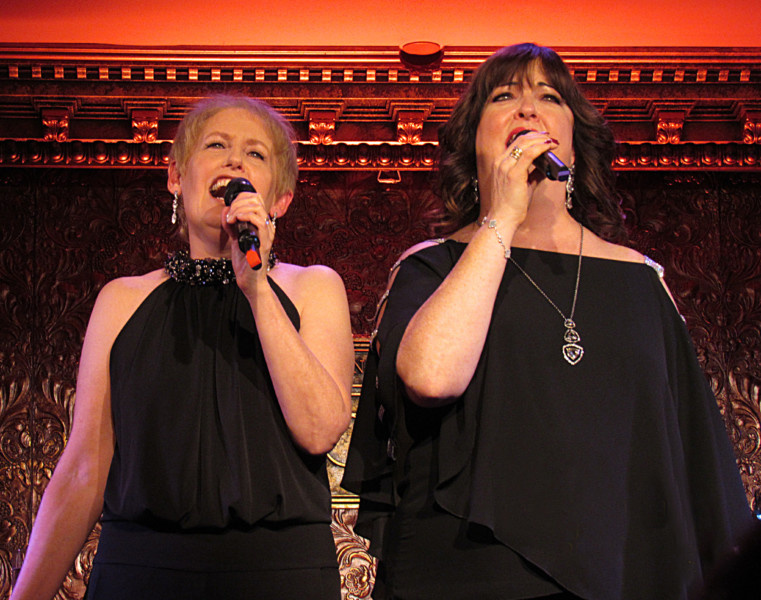 Starting off on her own Ann Hampton Callaway belts out “Some People” from Jule Styne, Stephen Sondheim’s Gypsy. Bound and gagged Liz Callaway hops right up next to her big sister to sing verse two. The medley continues with Hamilton’s “The Schuyler Sisters”, into the most incredible version of “Lullaby of Broadway,” I have ever heard.

These two were cut, at a young age on music by their mother, who was a pianist and a coach. Their first Broadway show, a touring company of Stephen Schwartz’s Pippin, treated the audience to a lush, harmony perfect melodic version of “Magic to Do” and “Corner of the Sky.” To see the Callaway sisters, is to hear harmonies modulate in such an ingenious way as to compliment, while bringing a song into another dimension. These two are truly inspiring.

Wanting to be a dancer and paying tribute to Marvin Hamlisch and Ed Kleban, Liz brought A Chorus Line‘s beat driven “The Music and the Mirror,” to a perfect finish.

In high school, Ann played Mame and if she sang “If He Walked Into My Life” the way she did last night, I would love to see her do this role on Broadway. Better yet Liz as Mame and Ann as Vera and then have them alternate. Now, that’s a revival worth seeing!

At the press meet and greet, I heard this exquisite version of Rogers and Hammerstein’s “You’ll Never Walk Alone” from Carousel. Again the harmonies and the emotional connection make this song a stand out.

Having worked with Stephen Sondheim in her first show and having played young Sally in a concert version of Follies, it was fitting for Liz to sing “Broadway Baby.” After all she was only 19, when she was cast in Merrily We Roll Along.

Keeping in the Sondheim mode and singing a song from Merrily, Ann launched into a devastatingly deep “Not A Day Goes By.” The two collaborated again with Company‘s “Being Alive.” Here’s hoping that the revival coming to Broadway this spring is sung just as connected, with such heart.

Harold Arlen and Johnny Mercer’s classic “Blues in the Night,” has never been sung this well. Ann’s version is the best I have ever heard. I wanted to stand up and cheer after this passionate ode to heartache.

Hearing Liz, recreate David Shire and Richard Maltby Jr.’s “The Story Goes On” from Baby, was a blast from my past. I was in the audience when she sang this the first time on Broadway. It was just as amazing now, as it was then.

These two songs would have been worth the whole concert. They were magical and there was still more to come. A Broadway melody captured duets fans had been asking for. I am putting in my request in now for their next show. I would love to hear them do “There’s Always a Women” from Anyone Can Whistle or “We Are Women” from Candide.

Stephen Schwartz’s “For Good” from Wicked brought out such love and acceptance. As the encore “You’ve Got a Friend” had the audience singing along. Not one, but three standing ovations for this well deserved night of musical perfection. There was not an audience member that didn’t know that this is one special evening to be remembered.

The Callaway’s were backed by their gifted musical director and arranger extraordinaire Alex Rybeck on piano, bassist Mary Ann McSweeney and percussionist Ray Marchica. These are some of the best musicians in the city.

Kudos also needs to be given to Liz’s husband, Dan Foster who directed this act with soul. He brought out the best in these two siblings and kept humanity, gratitude and warmth as his platform and it radiated through out the performance.

Sadly, Broadway The Calla-Way at Feinstein’s/ 54 Below is finished, however here is where you can catch these songbirds next:

Suzanna BowlingJune 7, 2022
Read More
Scroll for more
Tap
My View: Bill, Hillary, Mike, Henry, and 500,000 Voted for Tyrell at Cafe Carlyle
The New Release of a Sampling of Jagged Little Pill’s Album Will Have You Running To The Box Office to Get Tickets