Broadway The Minutes Gives Back as T2C Reviews Broadway The Minutes Gives Back as T2C Reviews

First up the producers and company of Steppenwolf’s production of The Minutes on Broadway are giving a portion of tickets sales to Save the Children’s Ukraine Crisis Relief Fund. So far they have raised $27,000 to support global humanitarian organization. For more information about the Ukraine Crisis Relief Fund is available at SaveTheChildren.org.

Now for the review.

In my lifetime I have been “privileged” to be in meetings with high end political officials. I have attended contentious town hall meetings and at one point I was the resident singer at the UN. The two things all these places have in common, is it felt like being in an over privileged sandbox of kindergartners. The one in charge is normally over pompous, condescending and patronizing. The ones at the desk stab each other in the back and are lesser versions of the one in charge. God forbid if a citizen goes against this incestuous, insidious mob. It is a little like watching an adult “Lord Of The Flies.” 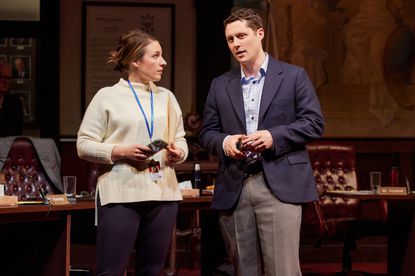 Tracy Letts’s The Minutes, takes place at a council meeting in a city called Big Cherry. The newest member  Mr. Peel (an earnest Noah Reid, “Schitt’s Creek”), missed last weeks meeting due to the death of his mother. In entering the building he hears that Mr. Carp (Ian Barford), is no longer in attendance and everything is being hush, hushed. 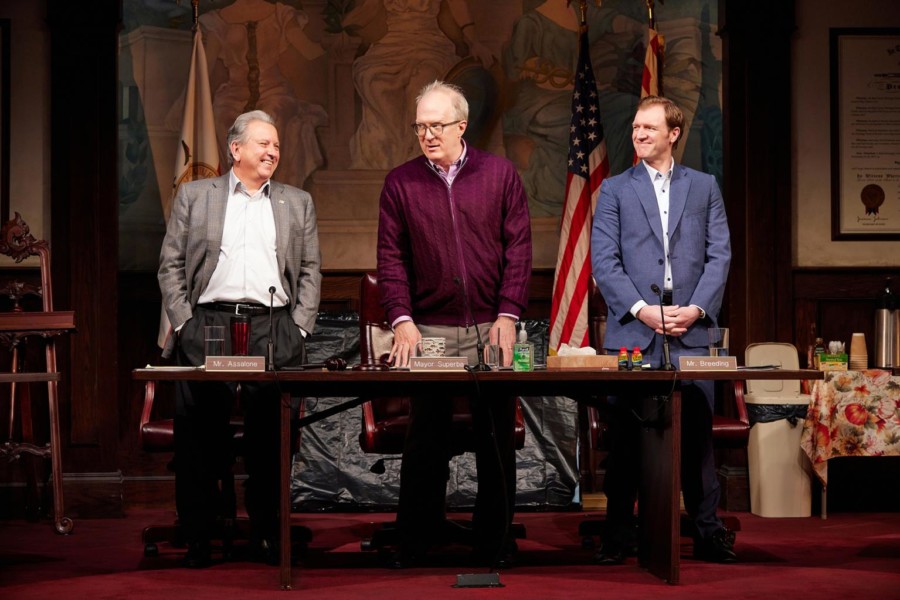 Mayor Superba (a sinister Mr. Letts) calls the room to order and asks for the minutes to be read by Ms. Johnson (Jessie Mueller ) the clerk. Instead of last weeks meeting, they read the minutes to the week before. Mr. Peel, concerned asks why the minutes of the previous week are not being distributed and the excuses make Mr Peel more curious and adamant to have those minutes read. 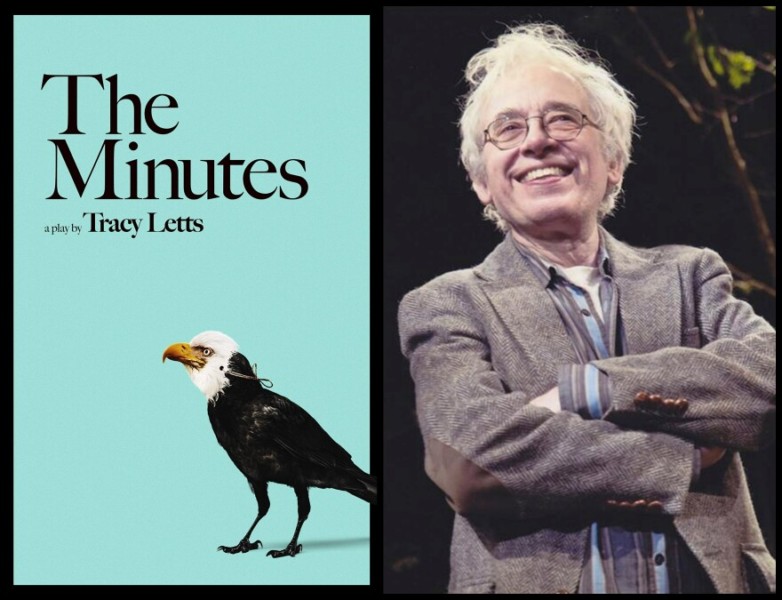 In the meantime the senior member Mr. Oldfield (Austin Pendleton), almost steals the show with his dry, sardonic humor about wanting the newly vacated car space. Ms. Innes (a terrific Blair Brown) insists on giving a speech on God knows what. Ms. Matz (Sally Murphy) is about to have a nervous breakdown. Mr. Hanratty (Danny McCarthy) wants to redesign the town’ fountain to accommodate his disabled sister. Mr. Breeding (Cliff Chamberland), is so not politically correct. Mr. Blake (K. Todd Freeman), the only black council member, wants to add a political incorrect attraction to the towns Big Cherry Heritage Festival. Mr. Assalone (Jeff Still) , a corrupt politician if ever there was one, has his hand in the till in more ways than one. The cast Photo by Jeremy Daniel

Finally the minutes to last weeks meeting get read, as s a flashback to the meeting at which Mr. Carp, reveals a historical inaccuracy, leads to massive fights over bikes found abandoned in town and the annual Heritage Festival, Big Cherry’s pride and joy. Told the history of the town from Sunday school the town reenacts earlier the history as they know it, which includes a father sleeping with his daughter, which is more acceptable than the truth.

Mr. Letts, writing for the fist hour is not as funny or back biting as it could be, then the last half hour happens and there is a gem of a play in here, it just is not fully fleshed out.

The last hall hour in which the play finally gets to its point, raises questions topical, troubling and highly disturbing.