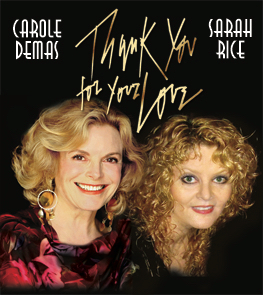 Broadway veterans Carole Demas, who originated the role of Sandy in Grease, and Sarah Rice, who originated the role of Johanna in Sweeney Todd, have teamed up to celebrate the music of Tom Jones and Harvey Schmidt, composers of The Fantasticks, 110 In The Shade, and I Do! I Do! and more.  Thank-You For Your Love feature songs, multimedia, and memories, basing the show on their 50 years of work and personal relationships with Jones and Schmidt.

Demas and Rice each played Luisa in the long-running original production of The Fantasticks. From a personal perspective, they will share their love and appreciation of years of professional work and ongoing friendships with Jones and Schmidt. This unique offering of songs, multimedia, and funny and poignant backstage/onstage stories will feature beloved favorites and other exquisite gems and novelty numbers sung by two of Broadway’s most captivating voices.

Carole Demas is best known for originating the roles of Sandy in the 1971 Broadway musical Grease and the title role in the original 1976 production of The Baker’s Wife, for many prime time television roles, hundreds of commercials, and for her role in the long-running children’s television show The Magic Garden. The winding path of Carole’s career, highlighted in Schirmer, Citadel and Applause Books chronicling the trials and triumphs of Broadway, has taken her from her early days as Miss Vermont in The Miss Universe Contest, to major roles from coast to coast. Her cabaret and concert performances have brought funds and attention to many worthy causes.

Sarah Rice is an American theatre actress known for her work in the Stephen Sondheim productions Sweeney Todd and A Little Night Music, the former of which won her a Theatre World Award in 1979. She is also known for her Montreal performance of Andrew Lloyd Webber’s The Phantom of the Opera, and her operatic performances in The Marriage of Figaro, The Barber of Seville and The Student Prince.