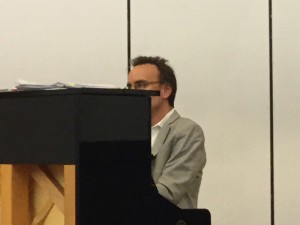 Nearly 6,000 people from around the world, turned out to celebrate their favorite thing….Broadway. For three days the event at the New York Hilton saw theater fans converging together to meet their favorite actors, sing their favorite songs and meet and greet others who felt just like them. Broadway may have shut down on Saturday and cancellations of celebrities which included Darren Criss and Jeremy Jordan happened but the fans made their own show with singalongs and a Saturday night cabaret that turned a slumber party.

Our favorite class was Melissa Erico’s Master Class. Here is Part 2 with Melissa and her fabulous musical director Ted Furth.Melissa Errico’s Broadway credits include My Fair Lady, Dracula, White Christmas, High Society, Anna Karenina and Amour (Tony Award nomination). A noted interpreter of Stephen Sondheim’s work, she has appeared as Clara in Passion (Classic Stage Company) and Dot/Marie in Sunday in the Park With George (Kennedy Center). Her other honors include five Drama Desk Nominations and a Lucille Lortel Award for her performance in One Touch of Venus (City Center Encores!)  She has released four albums, including “Melissa Errico: What About Today? – Live at 54 Below” (October 2015). Her new one-woman autobiographical show, Sing The Silence, debuts at Joe’s Pub in November 2015 (co-written with Adam Gopnik of The New Yorker). Television credits include the recurring role of Catherine on Cinemax’s “The Knick” and guest arcs on “Blue Bloods” and “The Good Wife.” She can be seen as June on Showtime’s “Billions,” premiering in January 2016. She is the founder of Bowerybabes, a New York nonprofit mothers’ support group. She lives in New York with her husband, tennis player Patrick McEnroe, their three young daughters, and one Yorkie.