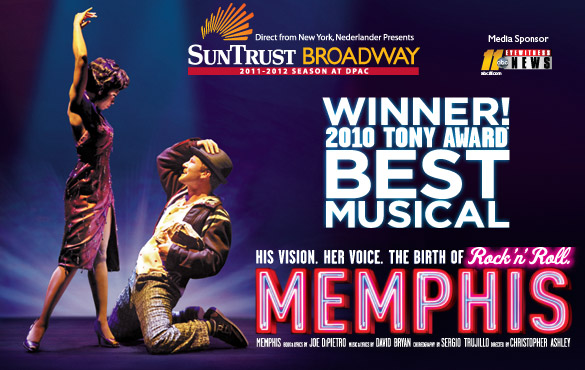 BroadwayHD, the premiere streaming service for theater fans, is kicking off September with everyone dancin’ to the Jailhouse Rock. Making its streaming premiere exclusively on BroadwayHD, Smokey Joe’s Cafe: The Songs of Leiber and Stoller, an infectiously fun and riotous rock and roll time capsule of top 40 hits captured live-in-performance on Broadway will debut September 12 . Grammy Award winners Jerry Leiber and Michael Stoller wrote hit songs for great artists such a King of Rock and Roll Elvis Presley, The Drifters, The Coasters and Peggy Lee. Subscribers can dance and sing-along to classics including: “Jailhouse Rock,” “Love Potion #9,” “Hound Dog”, “On Broadway”, “Stand By Me” and other favorites. If swiveling your hips to the music of Smokey Joe’s Cafe has you wanting more, continue your musical journey through the 1950s with the Best Musical Tony Award-winning performance of Memphis, featuring Tony Award-nominees Chad Kimball and Montego Glover, beginning September 26.

BroadwayHD is celebrating back-to-school with a playlist, debuting September 15, especially created for the whole family to enjoy includingHetty Feather, Peter Pan, Prince and The Pauper, The Sound of Music, and The Wind and The Willows. One of the most beloved ballets of all time, Swan Lake, starring world-renowned ballerina, Svetlana Zakharova, makes its way to BroadwayHD on September 19 with additional ballets planned to be introduced on the service in the coming months. Ballet lovers young and old will enjoy this production performed by the Bolshoi Theatre Ballet, capturing the beauty of storytelling through dance.

BroadwayHD co-founders, award-winning producers, and filmmakers Stewart F. Lane and Bonnie Comley said, “BroadwayHD is championing the greatest performances on Broadway, by extending their stage-life to the screen and introducing new audiences to some of the most beloved performances from the early aughts including culturally defining musicals such as Smokey Joe’s Cafe and Memphis. We are also thrilled to broaden our library with classical ballet, providing enthusiasts of the dance genre another way to enjoy streaming on BroadwayHD.”

See below for a full line up of what BroadwayHD subscribers can see starting this September:

BroadwayHD introduces award-winning theater from all across the globe with both classic and modern productions.  Fans can expect to see the full works of Shakespeare, awe-inspiring performances from Cirque du Soleil and a selection of the world’s greatest musical includingKinky Boots, Cats, 42nd Street, A Night With Janis Joplin, The Phantom of The Opera, The King and I, Sound of Music, and An American in Paris.  All performances are adapted specifically for streaming audiences to maximize the entertainment experience.  To learn more about BroadwayHD, visit www.broadwayhd.com.