I wanted to like The Neil Diamond Musical A Beautiful Noise, but the lackluster script by Anthony McCarten, the ill fitting costumes by Emilo Sosa, the lackluster music arrangements by Sonny Paladino, cluttered dance movements by Steven Hoggett and misdirection by Michael Mayer, made me scratch my head as to why. I am and was a huge Neil Diamond fan having spent some time in the trees at the Greek Theatre in LA, but the energy, raw talent and superstar status, was missing from this production.

For a musical about a mega star, the show starts off, as an older Diamond (the fabulous Mark Jacoby), is sitting with a therapist  (Linda Powell) who doesn’t even seem to know his songs. Diamond is unresponsive, so the therapist uses a songbook to coax the musician into revealing his feelings through his lyric and out come jazz hands to begin the journey.

We meet the younger version of Diamond (Will Swenson), who meets Ellie Greenwich (Chicago find Bri Sudia), at the Brill Building, who gets The Monkees to record his song “I’m a Believer.” While writing for other people, Ellie discovers that Diamond should be singing his own music and brings him to Bitter End. There he meets Marcia Murphey (The sensational Robyn Hurder), a women who has the same morose thoughts as he does. His wife at the time Jaye Posner (Jessie Fisher) is pregnant with his second daughter. They divorce to the tune “Love on the Rocks” and he marries Murphey. 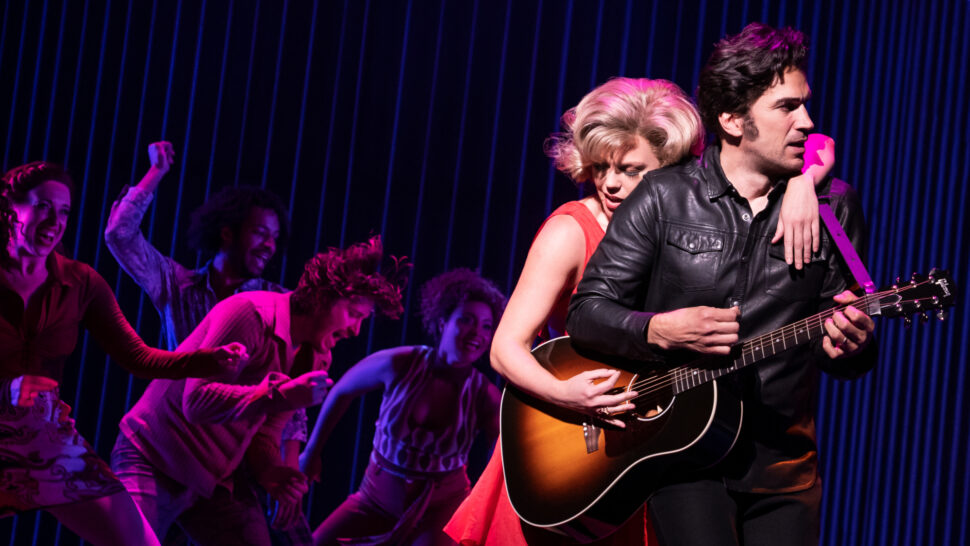 We are led to believe Diamond was in bed with the mob with Bang records, but the account is fictional in its facts. Michael McCormick and Tom Alan Robbins bring their comedic chops, to add some kind of credence. After leaving Murphey, alone for 25 years Hurder tears the house down with  “Forever in Blue Jeans.” As she and Diamond divorce we get the duet “You Don’t Bring Me Flowers.” Hurder, all but steals the show and I expect a Tony nod for her performance. She grabs our attention from the beginning with “Cherry, Cherry,” then “September Morning” and the other numbers she breathes life into. 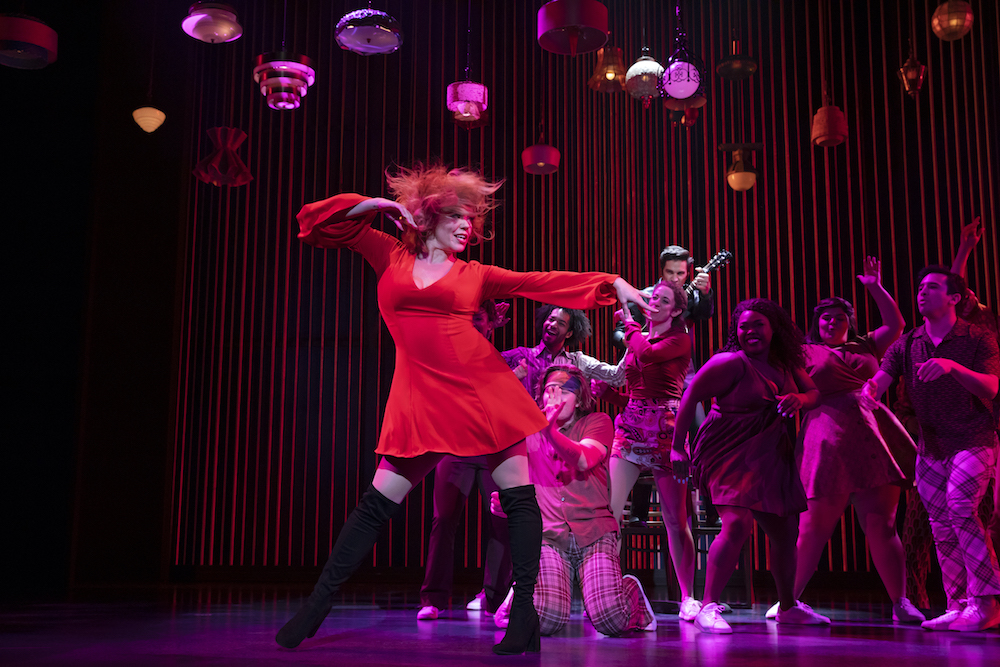 Robyn Hurder and the cast. Photo by Julieta Cervantes.

We learn that about Diamond’s repressed childhood memories in “Brooklyn Roads” and “Shilo,” but what really is at the crux of his  trauma, we are never really told. As a matter of fact we are not told that the reason he stopped touring was Parkinson’s or that he had four wives not three.

Audiences get the songs they want to hear such as “Song Sung Blue,” “Sweet Caroline,””America”and they are well done by Swenson. I personally really wanted more of “Holly Holy,” and “Brother Love’s Traveling Salvation Show.” 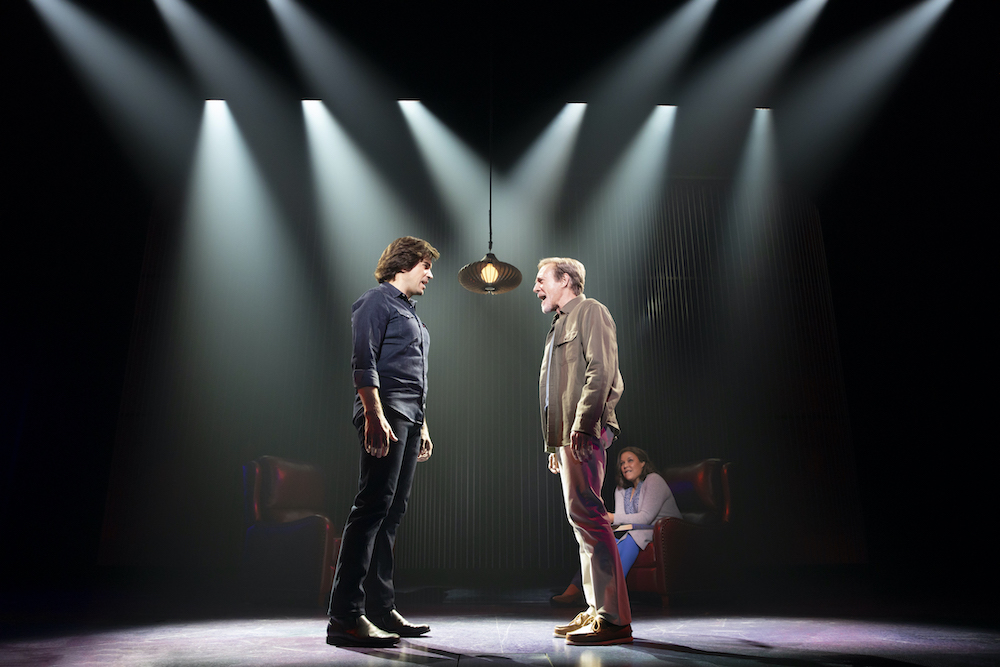 Will Swenson and Mark Jacoby. Photo by Julieta Cervantes.

One of the best moments in the show is when Mark Jacoby breaks down and sings “I Am… I Said.” You almost wonder why Jacoby wasn’t allowed to play the entire role. 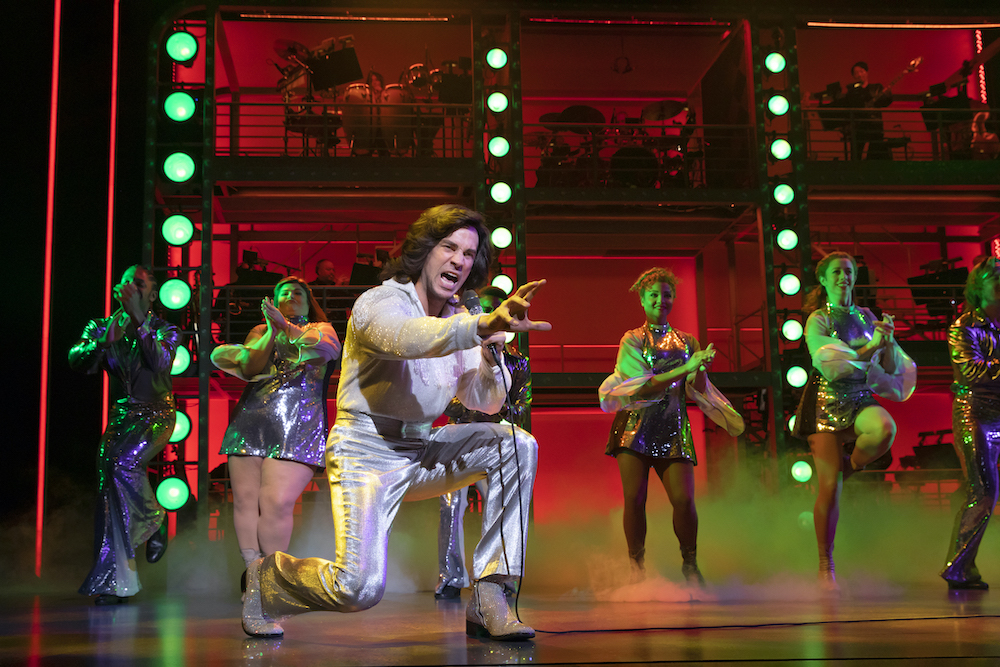 Will Swenson and the cast. Photo by Julieta Cervantes.

David Rockwell’s set along with most of the production values just looks cheep and for one of the best selling artist of all time this musical does not do this performer justice.

Suzanna BowlingJanuary 25, 2023
Read More
Scroll for more
Tap
T2C Goes To APAP
T2C Talks to Tony and Grammy Award Winner Jennifer Holliday About Becoming a Diamond at 54 Below and Her Mental Health Advocacy