Broadway’s Betrayal The Death of Marriage 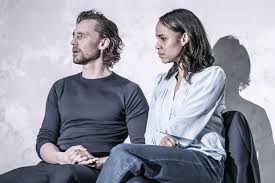 Broadway’s Betrayal The Death of Marriage

“A matinee, a Pinter play,
Perhaps a piece of Mahler’s.
I’ll drink to that.”

When ever anyone mentions Pinter to me, all I can think of is the lyrics from “The Ladies Who Lunch” from Company. How ironic considering both shows are about marriage and connection. The latest Broadway revival of Pinter’s Betrayal, is star studded and well acted by Zawe Ashton, Charlie Cox and the remarkable Tom Hiddleston.

The play has an asture, utilitarian set by Soutra Gilmour, with glaring lights by Jon Clark. Director Jamie Lloyd has striped this 1978 play to a couple a chairs and a folding table. There is no place to hide, as the actors crawl along the walls, like ghosts of the past and present, when not in scenes. Are they perhaps embarrassed at their behavior? At least Emma (Ms. Ashton) should, since she has cheated on her husband with his best friend for seven years. To make matters even more bizarre, her husband knew about it for two of those years. it took him two more years to finally leave this sham of a 14-year marriage. Emma and Jerry (Cox) have cared nothing about Robert’s (Hiddleston) feelings and yet when Robert tells Jerry he knew, it is Jerry who is hurt.

Betrayal starts at the end and makes its way backwards, but it is highly confusing. It is hard to care about any of these characters, as they are all unlikeable. Emma lies to both men, her husband Robert seems to care less and is more in love with Jerry and Jerry seems to care about nobody, but himself. Ironic since this role is based on Pinter.

Betrayal was inspired by Pinter’s seven-year affair with television presenter Joan Bakewell, who was married to the producer and director Michael Bakewell, whom Pinter was friendly with. It seems Pinter had a history of extramarital affairs, as he wrote this play while engaged in another long-running affair.

Ashton is flirtatious, manipulative and graceful, you understand why both men are drawn to her. Cox is charming, if not a bit daft and I have to admit I did not understand why Emma ever chose him over her husband, except he had a great pickup line. After all Jerry drunkenly declares his undying love to his best friend’s wife behind his best friend’s back? However it is Hiddleston’s performance, who is utterly devastated by both his wife and his friend that has our heart. His scene with Emma, when he learns the truth, has despair written all over his face, his eyes almost brimming over. Then when he sees Jerry, he is like a tiger wanting to claw, or maul him with the scars that have obviously set in, yet not wanting to destroy his friendship, a sense of complacency sinks in. It is heartbreaking.

As the actors circle together and apart always orbiting in each others hemisphere, we see the biggest betrayal is that of oneself. Nothing really happens once we know the secret, which is how the play starts. We just go through the motion of figuring out how these incidents happen. Thank-God for good acting.