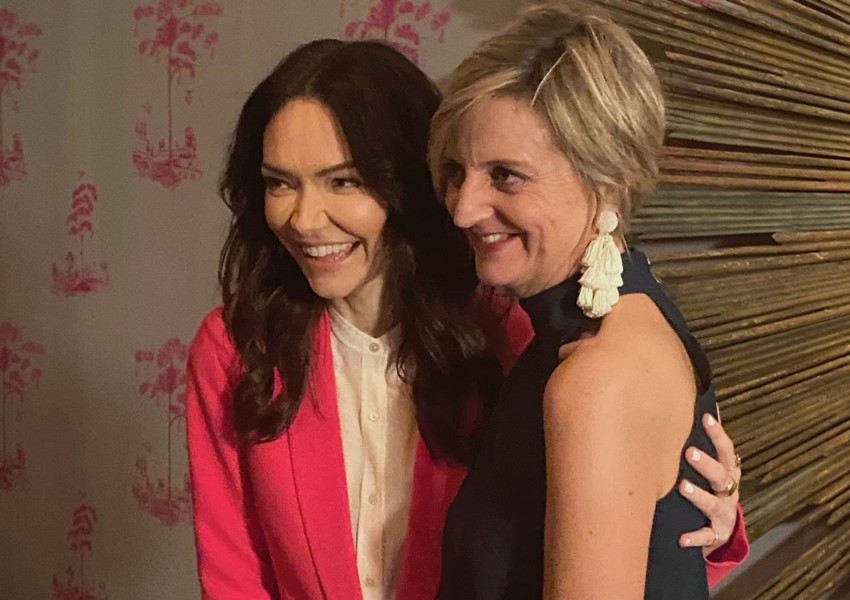 A “Galentine’s Day” press event at the Crosby Street Hotel, brought the cast members to meet the press.

Tony nominee Christopher Sieber is Harry, with Tony nominee Jennifer Simard as his wife Sarah. While interviewing Tony winner Patti LuPone who plays Joanne photo bombed and was interviewed by this hilarious duo.

Nikki Renée Daniels as Jenny and Christopher Fitzgerald as David, gave us some insight as to the changes we can expect for those of us who love the original version.

Rashidra Scott as Susan and Greg Hildreth as Peter give us some laughs.

For the first time in the show there is a same-sex couple with Matt Doyle as cold-footed groom Jamie (originally written as the female character Amy) and Etai Benson as his devoted fiancé Paul.

Claybourne Elder as Andy, Kyle Dean Massey as Theo, and Bobby Conte Thornton as P.J, while being interviewed had a mishap as a camera tripod fell into our interview.

Katrina Lenk sang a deliciously soulful “Someone Is Waiting”.

Director Marianne Elliott let us in that for the final day and second run-through, Stephen Sondheim would be in attendance.

Company is a Broadway transfer of the 2018 West End revival and will open at the Bernard B. Jacobs Theatre on March 22, 2020, with previews beginning on March 2nd.