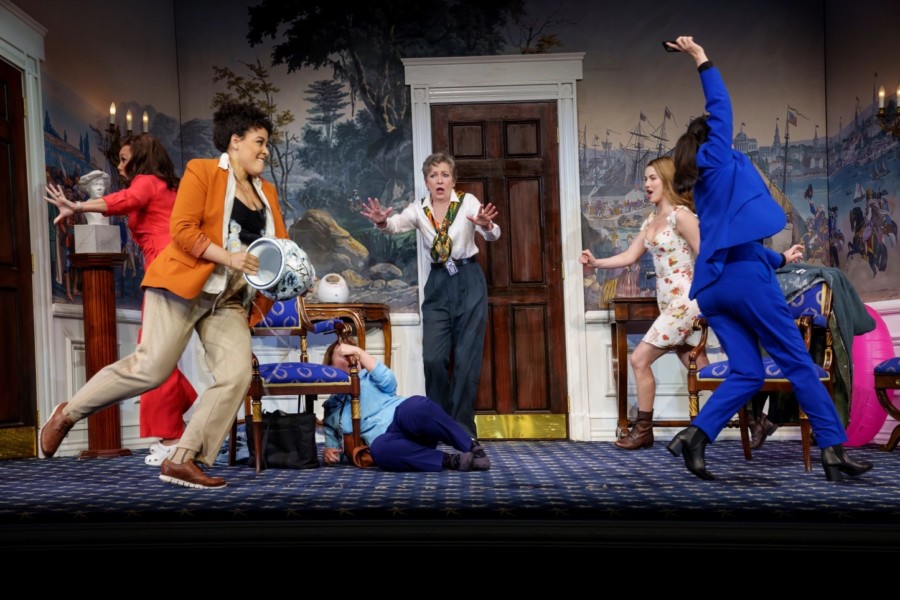 You can’t argue with a title like that. As for the women who make up this stellar cast of Broadway’s funniest comedy of the year, POTUS: Or, Behind Every Great Dumbass are Seven Women Trying to Keep Him Alive, they definitely know how to keep this ruckus play going strong and rocking, delivering line after line of hilarity for us all to savor. It’s pure deliciousness, this farce about all the female staff that work together to keep the country out of trouble. They do this with aplomb, all the while babysitting the idiot that holds the highest office in the land. If only all these women who brought forth this comedy actually could run the country. We might be better off.

Playwright Selina Fillinger (“The Morning Show“; Something Clean) along with director Susan Stroman (Broadway’s The Producers; Prince of Broadway) stepping out of her traditional musical/dance roots, play it big and for laughs. But the success of POTUS is also about the brilliance of assembling pretty much the funniest gaggle of gals around. Together that really make this play go round and round, without ever giving away just where this merry-go-round is going to land. Lead by the most magnificent Julie White (Broadway’s A Doll’s House, Part 2; Gary…), she guides with confidence this stupendous team of actors; Lilli Cooper (Broadway’s Tootsie), Lea DeLaria (Broadway’s On the Town), the outstandingly funny Rachel Dratch (Public’s Privacy), Julianne Hough (“Rock of Ages“), Suzy Nakamura (Netflix’s “Dead to Me“), and the delicious Vanessa Williams (Broadway’s After Midnight; Into the Woods) giving us all the best that they have, POTUS never fails in its effort to save the world from the idiot males in charge, and to make us laugh consistently throughout the roller coaster ride they take us on. Just send in the very game Hough and her Dusty to perfectively engage and solve some inconvenient problems, and even when off the mark, she, the others, and the play deliver the goods stupendously.

Suzanna BowlingJanuary 30, 2023
Read More
Scroll for more
Tap
Into the Woods To Transfer From Encores To Broadway With Some New Cast Members
Inside The Outer Critics Circle Awards