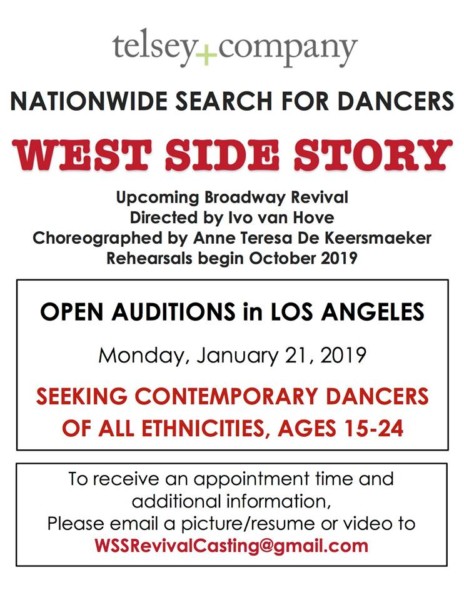 Broadway’s Revival of West Side Story Continues its Nationwide Search for LatinX Performers For Maria, Anita, and Bernardo

Broadway’s Revival of West Side Story Continues its Nationwide Search for LatinX Performers For Maria, Anita, and Bernardo 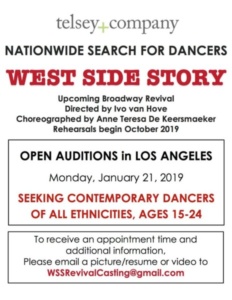 The much-anticipated Broadway revival of West Side Story is continuing its nationwide search for LatinX performers for the principal roles of Maria, Anita, and Bernardo, as well as contemporary dancers of all ethnicities, to join director Ivo van Hove and choreographer Anne Teresa De Keersmaeker for this reimagining of one of the most famous theatrical works of all time. To receive an appointment time for the principal roles, please email a headshot/resume or video toWSSRevivalCasting@gmail.com by January 22, 2019. The open dance call for the contemporary dancers will take place on Monday, January 21.

For more details on the sign-up, preparation, and location, please email

The Jerome Robbins / Arthur Laurents / Leonard Bernstein / Stephen Sondheim masterwork West Side Story will return to Broadway in a new production directed by Tony Award winner Ivo van Hove and for the first time ever in the United States, will feature all- new choreography by the internationally acclaimed Anne Teresa De Keersmaeker. The production will also feature scenery and lighting design by Mr. van Hove’s longtimecollaborator, Jan Versweyveld. West Side Story will begin performances on December 10, 2019, ahead of an official opening night on February 6, 2020 at a theater to be announced.

When the original production of West Side Story first premiered at Broadway’s WinterGarden Theatre on September 26, 1957, it utterly changed the face of the American musical theater. A career-defining milestone for every single member of its towering creative team — Laurents, Bernstein, Sondheim, and Robbins — West Side