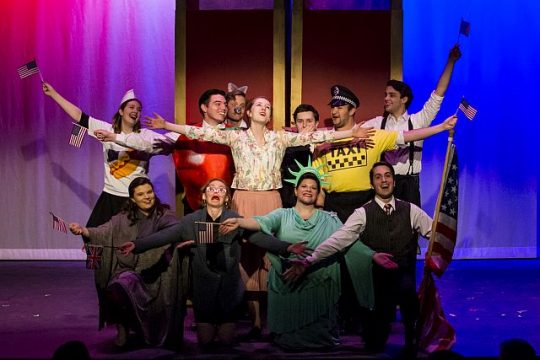 Anyone vaguely familiar with New York City’s famous families should know that Brooke Astor was the wealthy socialite who generously spread the great fortune of the Astor family while ruling New York high society for many years.  How she got to be the woman who could do that, and what it cost her personally, is the story of the new musical, Brook Astor’s Last Affair, which is receiving its first fully staged production at the Chicago Musical Theatre Festival on the Edge Theatre mainstage, after several developmental readings.

The team of bookwriter/lyricist Rachel Migler and composer Eric Grunin have created a highly stylized framework to let the dead Brooke tell her tale.  A highly theatrical approach may well be the best way to compress the many events of Brooke’s journey from an innocent teen, married off at age 17 for money by her insensitive mother (Sarah Schol), to one of the wealthiest women in the world.

Her first husband, Dryden Kuser (Christian Edwin Cook), literally raped her on her wedding night, and young son Tony (Marko McRae) was the product of that unhappy union.  She divorced Dryden, and remarried happily to Charles “Buddy” Marshall, who died unexpectedly.  Son Tony took the Marshall name because Buddy was the most loving father he’d ever known.  Brooke finally ended up being wooed and won by the fabulously wealthy Vincent Astor (Neill Kelly), who also died before she did.

The show opens with Brooke (Sarah Ohlson) already having died herself. She finds herself stuck in a limbo between Heaven and Earth, inhabited by dancing spirits, who communicate only in a kind of sign language which, miraculously, Brooke discovers that she can understand.  She’s “told” that she can’t leave limbo until she can earn her way out, with a deed that she has to discover for herself.  In the process, Brooke is put on a sort of existential trial for her salvation.

In the first act, the Prosecutor (Melanie Vitaterna)  seeks to find her guilty of a lifetime of coldness, and the deliberate rejection of the love of her son.  In the second act, the Defense Attorney (Emily Hawkins) sets out to prove that Brooke was in fact not guilty of excessive coldness, but a victim of circumstance.

Throughout her life, Brooke constantly rejected the affection of her own son, and ended up doting on his child, her grandson, Philip (Marko McRae as a boy, and Britton Paige as an adult) instead, as she succumbed to Alzheimer’s disease.   Brooke tries to excuse her lack of affection towards the adult Tony (Elijah Cox).  But not before she comes to understand her the origin of her attitude towards Tony can she find the redemption she seeks.

Ms. Ohlson’s unforced charm and great personal warmth made me want to let Brooke off on heavenly probation.  But I was confused  as I was watching this show was due to the team’s decision to wrap Brooke’s spiritual trial around another actual trial.  At the age of 85, Tony was put on trial and found guilty for defrauding his mother, by altering her will so that her estate would go to him and his most recent wife, Rene (Kayla Muldoon), rather than the charities to which she had originally left her fortune.  These two trials get conflated in a very confusing way.

The conceit of the two prosecutors putting Brooke on trial for her coldness gets dropped without any resolution or explanation.  Brooke then learns what she needs to know only thanks to an encounter with the spirit of someone from her past (I’m trying to avoid a spoiler here) which felt like a cheat.  Also, Brooke’s own spirit visits Tony at his actual trial in a touching moment, which felt, nonetheless,  like a breach of the separation established by the writers between the spiritual and the Earthly world. When you make up a fictional world, it’s important to play by the rules you set.

I cared for poor Tony’s plight mainly due to the very strong performance as both a young adult and older Tony by Elijah Cox.  Brooke’s husbands also were nicely depicted by their respective performers. The supporting ensemble all played multiple roles and delivered nice comic turns. A special mention should go to Cash Maciel, who was a standout comedic performer, and fine dancer.

The songs in this show are often more like operatic recitative.  They are packed with dense, conversational lyrics to drive the action that rarely coalesce around an idea or “hook”, and meandering melodic lines which frequently fail to resolve harmonically. The songs kept the show moving forward, but never moved me emotionally.  The overly busy, dual piano accompaniment was also distancing.

Director/Choreographer Nick Thornton got the most out of his hard working company, and provided enough fine dance moments to keep the audience visually entertained.

There certainly are interesting elements in this production, and a company of actors worth watching. But like Brooke in the afterlife, Brooke Astor’s Last Affairseems to be stuck in a creative limbo of its own, never quite being clear enough about how to redeem itself.