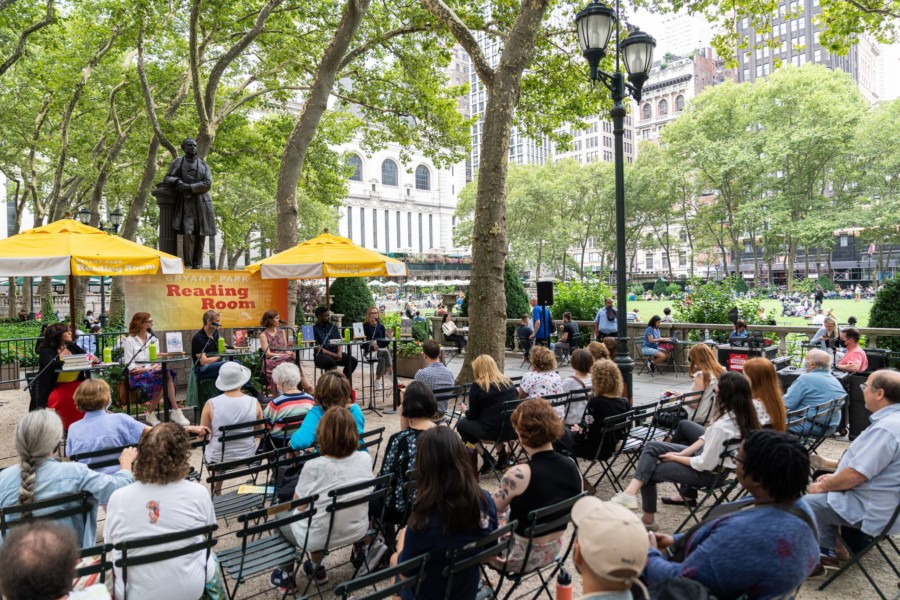 Bryant Park has announced the 2022 June Reading Room lineup as part of the annual return of the Bryant Park Reading Room during a monumental year celebrating Bryant Park’s 30th anniversary. The Books on Broadway series continues in June, along with Author, Poetry, BookClub, Reel Talks series, and children’s events.

The complete June Reading Room series details can be found below. Additional program lineups for July through September will be announced at a later date.

Learn about urban honeybees and the vital role they play in the environment.

Authors perform their stories in 650 words or less.

Terrence Rafferty, Conversation on William Wellman and The Ox-Bow Incident

TRUEly Inspiring – Memoir and Based on Facts

CNN Anchor Zain E. Asher, Where the Children Take Us

President Emerita Karen Brooks Hopkins, BAM…and Then it Hit Me

Grant Ginder, Let’s Not Do That Again

Meredith Schorr, As Seen on TV

The Bryant Park outdoor Reading Room is located at the 42nd Street allée – between 5th & 6th Avenues – under the London Plane trees. Because of the outdoor locale, there is ample seating for all to enjoy.

The space is defined by five specially designed carts: one cart is devoted to authors who have participated in the Bryant Park literary series and best sellers; one cart is filled with a complete “Classics” collection; one cart is dedicated to children’s books; one cart carries magazines; and one cart is committed to a variety of newspapers. And what makes the Reading Room even more special is that over the course of each summer, there are dozens of programs promoting multiple themes and genres for the public to attend. From poetry to fiction, non-fiction to book clubs, writers workshops, and programs for children, it is a popular destination for bookworms and authors alike and is free to the public.

This year marks several milestones in Bryant Park’s history. The park is celebrating the 30-year anniversary of its restoration and the 20-year reopening of the outdoor Reading Room in Bryant Park.

The Reading Room in Bryant Park was originally established in 1935 by the New York Public Library as a refuge for the thousands of unemployed New Yorkers during the Great Depression. The “first” Reading Room closed in 1944, only to be reopened by the Bryant Park Corporation in 2003. It is now one of the most popular amenities in Bryant Park.