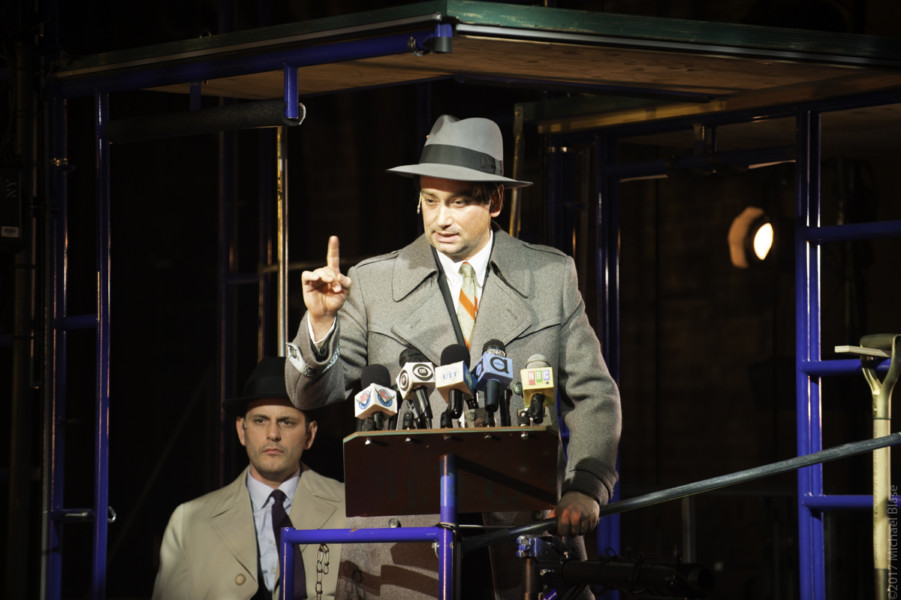 Bulldozer: The Ballad of Robert Moses a One Note Headache of a Musical Mess

Bulldozer: The Ballad of Robert Moses a One Note Headache of a Musical Mess 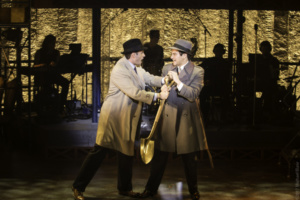 Bulldozer: The Ballad of Robert Moses by Peter Galperin, concept, music, lyrics and book and co-book writer Daniel Kadin, is a mess from start to finish. This 95-minute rock musical, which opened last night, thinks that it is playing in Madison Square Gardens, instead of a small theater on West 46th Street. By the time the show was finish I needed a bottle of aspirin. The show is based on Robert Moses, a man who was vital to the growth of New York and Long Island, but is blamed for creating a traffic nightmares, ignoring mass transit, displacing the poor and those of color. Moses built major roads such as Major Deegan Expressway, the Triborough Bridge, the Henry Hudson Parkway, Jones Beach, Lincoln Center, Shea Stadium, numerous lecture halls, apartment houses, cultural centers, and many parks, just to name a few. In total he built 13 bridges, 416 miles of parkways, 658 playgrounds, and 150,000 housing units. At his peak he held 12 offices in NYC Government and yes like most politicians was an ego maniac. 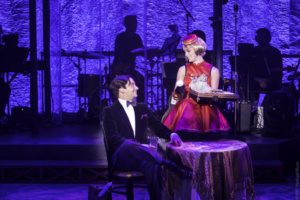 The show starts off  with a street musician (Ryan Knowles) playing guitar, but the actor who fakes playing, can’t even strum in time to the song he is singing and this happens 6 times. Highly annoying. Moses is played by (Constantine Maroulis “American Idol” and Rock of Ages), but he is so one-deminsional that it is hard to believe this is the man who created and had a vision of the future. When we first meet him he wants to write poetry and rise in power without working for it. His mother knows Gov. Al Smith and he expects to just be given the position. He then becomes friends with Nelson Rockefeller (Wayne Wilcox, the only singer who doesn’t scream) and together they rise in power, until Moses oversteps his bounds with arrogance. In the meantime we meet Vera Martin (Kacie Sheik), a cigarette girl who Moses meets, who we thinks is his wife, but learn later she is just his assistant/ mistress. Ironically when researching this man, there was no Vera. So why not use one of his two wives, who are never mentioned? We also meet public advocate Jane Jacobs (Molly Pope) who ultimately helped take Moses down. 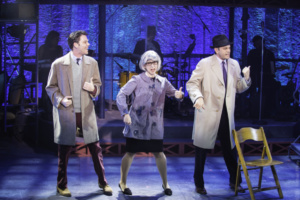 The performances are so cookie cutter, that it is hard to care. Ms Pope and Mr. Wilcox do their best to bring off well thought out characters and do well on “There’s No One Else” and “You Can’t See”. 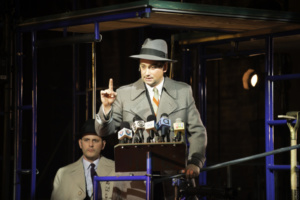 The direction is all over the map and though I really like Karen Carpenter’s work, I think she was at a loss at what to do here.

The script is a mess and we never really get to know the inner workings of this complex and complicated man.

The music all sounds the same and maybe if the singers were not trying to out sing the band and each other, it would be easier to judge.

Maybe there is a musical here, but it needs so much work, I think the whole thing should be bulldozed and put out of it’s misery.