Bullets Over Broadway- Exuberant in its Exuberance

Bullets Over Broadway- Exuberant in its Exuberance 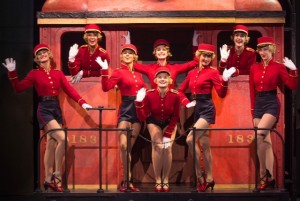 Desperately needing a break from the nonstop blitzkrieg of political coverage that has absorbed every media outlet lately? Look no further than the silly and affable antics of Broadway in Chicago’s latest production, the national tour of Bullets over Broadway. Based on the 1994 Woody Allen film of the same name, the real pedigree here is the behind the scenes talent. Written by Oscar Award winner, Woody Allen, costumed by six-time Tony Award winner, William Ivey Long and initially directed and choreographed by five-time Tony Award winner, Susan Stroman. Yes, the actual story really is paper thin and as filling as cotton candy, but please trust me, I say that as a complement. For the tour, Jeff Whiting stepped in to direct and Clare Cook was brought on board to recreate Stroman’s rambunctious choreography. Bullets reminded me a great deal of a previous hit musical, The Producers, with its broadly drawn characters and intentional slapstick. Bullets Over Broadway endeavors to tell the behind the scenes tale of the chicanery involved with the makings of a Broadway play. From secret affairs to reworked scripts, with scene-stealing, tap-dancing mobsters and a closeted binge eater. The results are indeed amusing and giggle inducing. 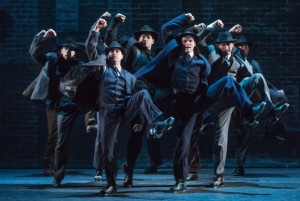 The story within the story originates with young playwright, David Shayne (Michael Williams) and his failed attempts to get his work produced. Who would have guessed Gangster Mob Boss, Nick Valenti (Michael Corvino) would be Shayne’s salvation? With one caveat of course, a part must be created for the mobster’s bubble headed and nasal voiced girlfriend, Olive Neal (Jemma Jane). Portrayed as vapid, selfish and talentless, Jane’s bump and grind solo “The Hot Dog Song” all but stole the entirety of act one. Confident his lady may be tempted to stray, the Mob Boss sends hit man, Cheech (Jeff Brooks) to keep an eye on her, but his real talents lay elsewhere. As Shayne quickly realized his work, well, needs work, Cheech became the creative savior of the show. Brooks is also a spectacular singer and dancer who does incredible justice to the song and dance of “Tain’t Nobody’s Bizness If I Do.” Rounding out the cast, Warner Purcell (Bradley Allan Zarr) an established character actor and relentless snacker, with an ever expanding waistline which became the sight gag of act two. Saving the best for last, aging grand Broadway diva, Helen Sinclair (Emma Stratton) an actress as well dressed as she is alcohol soaked. Her catch phrase, “don’t speak” carried over from the film superbly. Electing to engage in an illicite affair with the writer to quickly buff up her lackluster part, set to the catchy tune of “I Ain’t Gonna Play No Second Fiddle.” 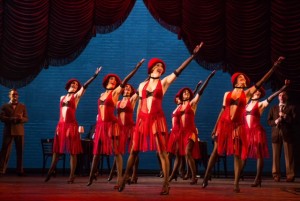 Playfully witty and wry, Bullets Over Broadway was a dazzling song and dance fest for the eyes and the soul. Allen’s signature double entendre filled script will leave you amused. “If you are going to go down, go down on the best.” A soundtrack of 1920’s standards,  including “Let’s Misbehave,” “I’m Sitting On Top Of The World,” and “Running Wild” will tickle your eardrums as well. The scenic design by Jason Ardizzone-West impressed as did the wig and hair design from Bernie Ardia. The outright “bananas” filled finale punctuated the overall screwball spirit and collective silliness of this helium light charmer. Doesn’t serve or advance the story in anyway, but it had each member of the audience exiting with a grin. 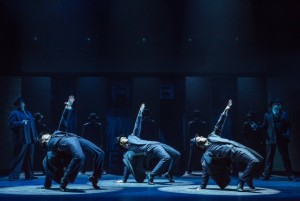 Now, let’s discuss the serious elephant in the room.  I have, until now, ignored the fact the original Broadway production of Bullets Over Broadway was an unmitigated flop. A $14 gamble that didn’t come close to paying off, shutting its doors after just five months, 156 performances and 33 previews. Perhaps it was the serious competition that eclipsed its chances for success? Opening against the megahits Beautiful The Carole King Musical, A Gentleman’s Guide to Love and Murder, and Disney’s family fare Aladdin, didn’t help its chances from the beginning. The marquee name recognition of Woody Allen and Susan Stroman paled in comparison against the juggernaut star vehicles of that season; Neil Patrick Harris’ Hedwig and the Angry Inch and Frozen’s Queen Elsa herself, Idina Menzel’s If/Then. Collectively, they all but doomed Bullets chances out of the gate. Not being nominated for Best Musical at the Tony Awards was the final nail in this shows Great White Way coffin? For that, you could point the finger of blame inward to a cliché riddled story that had been told many times before and with much better results. Regardless of the initial show’s failure blame game, this tour’s cast offers legitimate laughs, solid production numbers, eye-popping costuming, and a break from all things Trump!  What could be better than that? 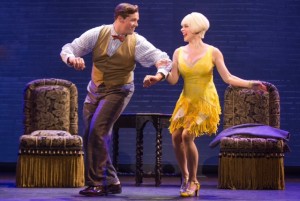 Broadway in Chicago’s Bullets Over Broadway is now playing at the Private Bank Theatre through May 1, 2016 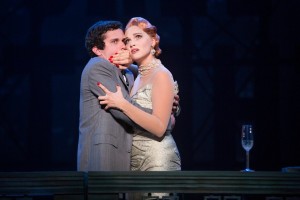 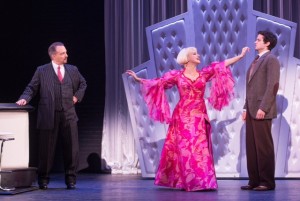 Claudia PerryNovember 1, 2022
Read More
Scroll for more
Tap
The Nominees For The Off Broadway Alliance Are Announced
The Midtown Men Four Stars From The Original Broadway Cast of Jersey Boys