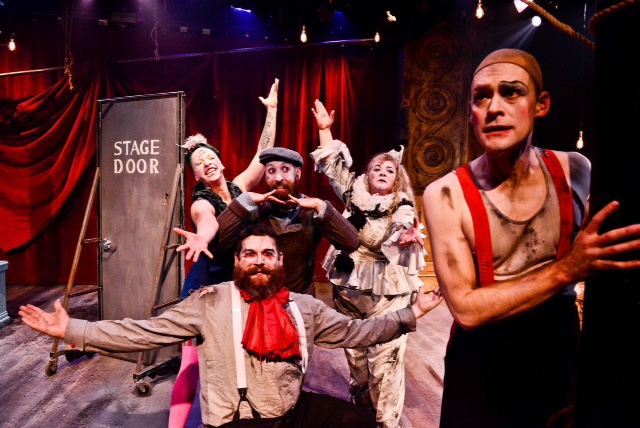 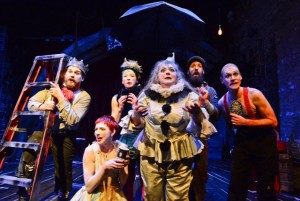 ‘Tis the season for something a little darker then the standard holiday showcase. Chicago’s lush artistic history takes a turn for the macabre with The Hypocrites presents The Ruffians’ revival of  Burning Bluebeard. Directed by Halena Kays and associate director Joseph Schupbach, playwright Jay Terrence’s hauntingly beautiful tale occurs during the 112th anniversary of the fateful 1903 Iroquois Theater Fire. Inspired by a true story, the production centers around six singed clown performers who rise from the burnt remains of the stage to perform their Christmas Pantomime one last time for a captivated audience.  In the shadows of the pivotal event which killed 600 audience members, Burning Bluebeard is highly imaginative, completely engrossing, artistically whimsical, and lyrically structured. 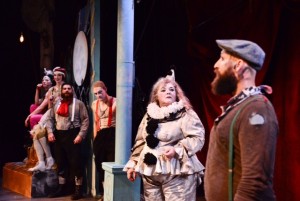 Featuring the full cast of last season’s successful run, Pam Chermansky returns as the alluring Fancy Clown, Anthony Courser plays both Henry Gilfoil and Bluebeard, Molly Plunk shines as the Faerie Queen, Jay Torrence entertains as Robert Murray, Leah Urzendowski bewitches as Nellie Reed and Ryan Walters puts his unique spin on Eddie Foy. These remarkable vaudevillian troupe members tumble, dance, clown and create moments of soaring acrobatics that captivate, entrance and touch the heart. “Sometimes in this life, there is just evil. No one knows why?” is uttered as the cast slowly unveils the unfortunate series of events that lead to the demise of the theatre and the premature, tragic ending of so many lives. Morbid fascinations and natural curiosity are simultaneously on display here within the poetic prose. 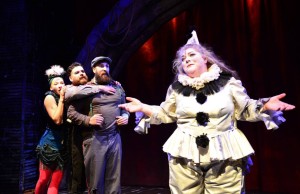 Bluebeard crafts elements of circus stagecraft with an unstructured narrative reaching a creative nirvana-like level of spirit. Set to a score of Icelandic techno music and pop hits, including a sample from Amy Winehouse’s chart topper, Rehab, this boundary pushing piece of performance art will make the viewer say “no, no, no” upon its climax. Jessica Kuehnau Wardell’s costume design blends big top frivolity with singed accents, ever the reminder of the inspired production’s fateful day. Lizzie Bracken’s scenic design transports the audience from high a top center stage to the literal graveyard of its performers and theoretical graveyard from which the story rises like a beguiling phoenix. 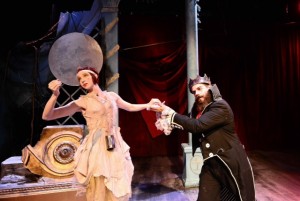 Not for everyone, I found Bluebird mesmerizing in a way that stayed with me long after the show concluded. These vaudevillian vanguards spin a woeful tale at the very forefront of the typical holiday fare currently playing all over the Windy City. Original, bold, and defiant, covered with a veil of childlike innocence resonating throughout the entire presentation, Burning Bluebird was a riveting tale masterfully woven and essential viewing for every patron of the arts.
The Hypocrites present The Ruffians’ Burning Bluebeard  is now playing at the Den Theatre’s Heath Main Stage through January 10, 2016.
Related ItemsAmy WinehouseBurning BluebeardChicagoNewStephen BestTimes Square Chronicles
Entertainment