But I cd only whisper An American Tragedy

But I cd only whisper An American Tragedy 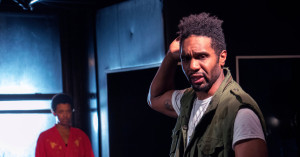 Meet Beau Willie Brown (Toussaint Jeanlouis), a Vietnam War vet in Kristiana Rae Colón’s But I Cd Only Whisper, at the Flea Theater. In A psychiatrists (Brandon Rubin) office we learn of Beau’s life and the tragedy of what “post-traumatic stress disorder” can lead to. By the end of this play your heart will bled for the men like Beau who are uneducated, black with a violent underside that comes undone when placed in situations that trigger the explosive destruction of a mind.

Born into a poor black neighborhood, all Beau has ever known is violence and abandonment. Conditioned to attack from the day he was born. His highly racist sargent (Matt Stango) states “He had a knack for killing.”

“But I Cd Only Whisper,” is borrowed from For Colored Girls Who Have Considered Suicide/ When the Rainbow Is Enuf. In that play it was a monologue by Crystal about the abusive black male. In But I Cd Only Whisper, those words are Beau’s, but they come from an mind that has cracked and splintered.

Crystal (Kineta Kunutu) is still here to tell her side, but so are his best friend (Akeem Baisden Folkes) and his white girlfriend (Crystal Arnette). The cast are all “Bats,” the resident company of The Flea and they are committed and talented with Mr. Jeanlouis giving a layered performance of this complex man who in the end breaks, as do we from watching this destructive tornado. As Crystal, Ms. Kunutu shows us the girl at 13 who falls for this older man, to the women trapped by his abuse and mindset, that no black man, no matter what should die or go to jail, no matter what he has done. I also liked Ms. Arnette’s performance of the white women who would do anything for her man.

Directed by David Monteagudo, this play is edgy, touching and heartbreaking.

Ms. Colón’s script is poetic, as she is clearly in love with her subject and that admiration rubs off into the audience. First staged at the Arcola Theater in London in 2012, this is the play’s American premiere.

Beau’s life will make you think of all those men who were sent to war, who are neither fit or strong enough for what this really entails. But I cd only whisper, is an American tragedy that happens way too often.

But I cd only whisper: Flea Theatre, 41 White St. until March 14th.

Suzanna BowlingJune 22, 2022
Read More
Scroll for more
Tap
Winning Is Not Everything In Red Speedo
The Wildness A Happening In Theatre