By Jove, By Jeeves…a Streaming Comedic Nugget from Lord Webber 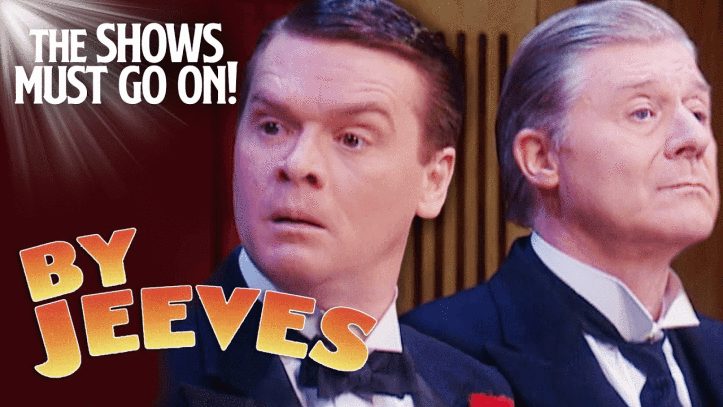 By Jove, By Jeeves…a Streaming Comedic Nugget from Lord Webber

The latest release from Andrew Lloyd Webber’s Shows Must Go On channel was a 2001 film production of By Jeeves, the musical British farce based on a series of novels and short stories of P.G. Wodehouse. I was excited when frontmezzjunkies requested me to review this show, as I have been greatly anticipating its release following ALW’s initial announcement on the channel specifically stating that By Jeeves would be part of the line-up. I first became aware of the show when my parents traveled to London in the 90s and returned with the cast recording and a souvenir program as gifts for me. As it is not produced often, I have wanted to see a production ever since.The film version opens using POV camera work allowing the viewer to have the sense of being an attendee arriving at a charity banjo concert at the Little Wittam Community Hall.

Through this introductory segment, we are introduced to the actors who will eventually be assuming roles in the story as they sell tickets, hand out programs, perform last-minute lighting adjustments, hock refreshments, and finalize chair placement while making our way to our seat. What unfolds next is British farce of the most amusing order with all the mistaken identities, love triangles, and hilariously awkward situations one would expect. Following humorously extensive introductory remarks, we meet Bertram “Bertie” Wooster, our banjo artist for the evening, played with absent-minded, bumbling aplomb by John Scherer (MTC’s LoveMusik). Shortly, Jeeves, played by Martin Jarvis (West End’s Honour) who delivers all of the upright British correctness and side-eyed sarcasm one expects from the valet to a less-than-intelligent English gentleman, informs Bertie that his banjo has been stolen and suggests he instead entertain the audience with stories of his recent misadventures. Bertie reluctantly agrees because of the “Wooster Code” of allegiance to those in trouble, in this case our beleaguered audience.

John Scherer (center) with the cast of By Jeeves Due to the impromptu nature of the events that unfold over the next two hours, consistent amusement is achieved by Jeeves and his stage crew throwing together props and costumes from items available backstage at the hall. Notable among these include a love seat and cardboard boxes on a rolling platform as a car for the amusing traveling segment and the window and ladder combination used to reenact Bertie’s late-night hijinks. Roger Glossop provided production design for the film with costume design by Louise Belson.The musical numbers are mostly comical romps and a departure from the drama of Webber’s better-known works such as The Phantom of the Opera, Jesus Christ Superstar, and Evita. Lyrics were written by Alan Ayckbourn (Woman in Mind) who also penned the libretto and directed the film with Nick Morris (the 25th anniversary celebration of Les Miserables). One highlight is in “That Was Nearly Us” with Bertie attempting to ward off the progressively aggressive romantic advances of his former fiancée Honoria Glossop, portrayed with amusing vitality by Donna Lynne Champlin. Act One closes with the hilarious and seemingly endless “The Hallo Song” chronicling Bertie’s difficulties maintaining his hidden identity. Musical high points of act Two include Bertie and his two best friends comedically bemoaning their communal lack of intelligence and need for assistance from Jeeves in “By Jeeves,” and the entire cast chasing Bertie in “It’s a Pig.”

John Scherer in By JeevesScherer and Jarvis are supported by a collection of delightful performances from the ensemble cast. Bertie’s best friends and victims of his oblivious approach to life are Augustus “Gussie” Fink-Nottle played by James Kall and Bingo Little by Don Stephenson. Antagonists of the story are Sir Watkyn Bassett, magistrate and owner of country house Totleigh Towers where much of the action of the show takes place, played by Heath Lamberts and American jelly magnate Cyrus Budge III Junior played by Steve Wilson. Sir Watkyn’s daughter and love interest of Gussie is Madeline Basset brought to high pitched life by Becky Watson. Sir Watkyn’s mischievous ward Stephanie “Stiffy” Byng, portrayed by Emily Loesser, is in love with vicar Harold “Stinker” Pinker played by Ian Knauser. Musical direction for the film is provided by F. Wade Russo who also plays piano on the stage and is addressed by Bertie and Jeeves as Oswalk “Ozzie” Nutledge. Tom Ford, Molly Renfroe, and Court Whisman round out the cast in ensemble roles.Other technical credits for the film are given to Sheila Carter for choreography and editing by co-director Nick Morris. The film was produced by the Canadian Broadcasting Company, Really Useful Group, and Tapestry Pictures. All in all, By Jeeves is a delightful evening of musical theatre with a multitude of laugh-out-loud moments, catchy musical numbers, and a ridiculous storyline. It was even better than little teenage me ever could have imagined when playing the action in my head based on the cast recording and pictures from the souvenir program. For those who missed this gem, there is a low-quality version available on YouTube.